Four Fitts or Nine Parts? Issues of layout in Sir Gawain and the Green Knight 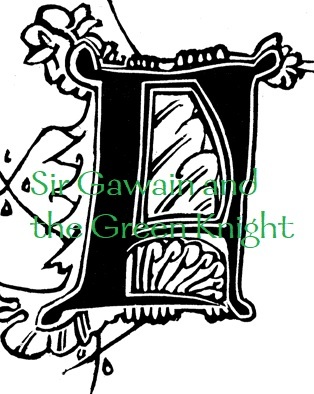 In all the many translations there have been of Sir Gawain and the Green Knight, it has long been accepted that the work breaks down into four fitts, or parts. Does this still hold true today?

Recent analysis has attempted to change this way of thinking by examining the role played in the original manuscript by the series of illuminated letters which occur within it; indicating that the work may originally have been divided into nine distinct sections.

A reading of the original manuscript is informative. It is observed that the poem does not notably separate into sections at all. Rather, it is one long stream of text broken only by the quatrains of the poetic "wheel" at the end of each stanza and occasionally by an illuminated letter.

The role of Sir Frederic Madden

The poem was first structured into its commonly accepted form by Sir Frederic Madden in the 19th Century in his Syr Gawayne, a form followed and adopted ever since by translators as varied as Richard Morris, JRR Tolkien, Israel Gollancz, Simon Armitage and now by myself.

To follow this arrangement is acceptable, logical, and convenient. It is true that there are indeed nine illuminated letters which break up the text but it is also true that four of them are bigger than the others. These four letter are those found at the beginning of each of the four of Madden's fitts (linocut versions of which I have recreated for my own translation of the poem).

The four fitts are distinct from each other. Fitt 1 introduces us to the story, describes Christmas at Camelot and then opens the "Adventure" with the arrival, challenge and beheading of the Green Knight. Fitt 2 follows Gawain on his journey to Hautdesert, shares his trials in the snow before his arrival at the castle and then introduces us into the bosom of Bertilak's family (including, notably, the Lady and the aged aunt).

So do the minor illuminated letters add to this structure; indeed, do they deny it altogether? The structure appears to be:

The logic of this cannot be denied; each of these sections denotes a distinct period in the poem, many of which carry their own themes, often religious (linking in with other works in the Cotton Nero A.x mss). Yet we are still compelled to reflect that the major letters are distinctive in quality of execution and the elaboration of their technique.

In my translation of the poem, I have retained the four fitt structure of Madden for reasons of acceptance. However, for the reader's pleasure, I have ensured that each of the letters - major and minor - are replicated in their precise locations in the poem. In my translation, the combination of the four fitt structure, with minor lettering shown, allows the reader to read the poem as they wish.

Order your copy of the collectors edition - with illuminated letters

Many people reading this article will already have pledged for their special collectors edition of Sir Gawain and the Green Knight. If you have not yet pledged and would like to receive a deluxe edition (significantly different to that available through the bookshops/Amazon), please pledge today. Only pledges received before publication will be guaranteed the collectors edition (with spot varnish cover, high grade paper, pentangle-embossed jacket, silk bookmark and many other features).