Throughout Shine On Me, and previously in Moonstomp, I have been detailed on clothes. This book is set in 1980, and Moonstomp in '79. The clothes can be more fun to write than the sex and aggro. Maybe that's nostalgia (for all three!) and age.
It annoys me when subcultural writing is lazy and gets the style wrong. 'The look' was the most important thing for us. We may not have had much else but it was that which set us apart and made our statement. I lose interest when the clothes and music aren't right: it tells me the writer has no interest in what they're doing. War films with post-WW2 tanks painted up to look like panzers similarly have me hitting the off button.
Styles and fashions changed quickly and the skinheads in 2021 with their top shirt buttons done up, and those of 1981 in their green flight jackets wouldn't have been seen in 1979-80. These are the ones we regularly see on TV no matter when the drama is set. Imogen Poots' syrup was many things, but skinhead it was not.
I was wearing Frank Wrights, Sta-Prest, and an 'arrington myself so memory definitely helped with the book. There's a lot of help on the interwebs too. The skinhead interweb is 90% someone posting a picture they've googled and we've all seen before and then an argument about the precise date 'til someone calmer points out that different areas had different looks.
This time round there are more mod characters, mod weetches at that, and I had particular memories of how the girls dressed. However, I'd completely forgotten the kind of shoes they wore. I was fine with the barnet, the jumper, the ski pants even... but the shoes? Thankfully mates were there to help, so a big thanks to Polly, Donna, and more.
This little bit comes from chapter 4:

'He came through the door of the caff accompanied by a sharply dressed mod girl. There shouldn’t be any other type of mod, but sadly, just as hairs from a precise geometric loosely clog the plughole, there are. She was resplendent in red Fred Perry V neck over a buttoned up white Fred Perry shirt that had blue and red striped trim on the collar. A fine link silver chain hung down from beneath the collar of the Perry. There was what looked like some sort of star hanging from it, but it was slightly hidden by the jumper, Joe couldn’t clearly see what it was. Her shaggy raven pixie cut feathered to the turn of the collar at the back of her neck. Looking down Joe saw she was also sporting crisply pressed trousers with a black and white dogtooth fleck, cut to a tight hem, Her purposeful walk caught the eye and made a statement as much as the directness of her movement, the sharpness of her look. Red socks echoed the scarlet of her jumper, and black basket weave K Skips completed her careful silhouette. She was quite the sort.' 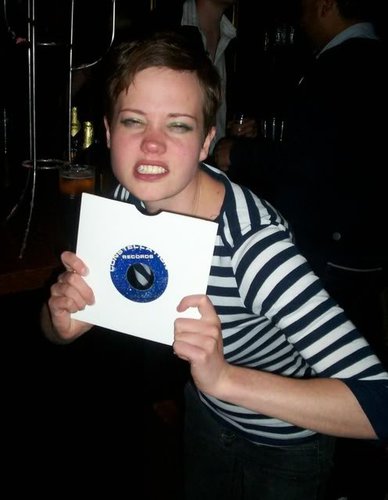