One of my favourite weird places in London is the Limehouse Pyramid and it features as part of an occult ritual in Shine On Me. This is how chapter six kicks off...

'From Commercial Road the Limehouse Pyramid thrusts up like an occluded tooth in the churchyard of St. Anne’s, one of Hawksmoor’s churches that supposedly form a five pointed star. The day falling to twilight added to the air of mystery. The structure is twice the size of man and no-one is quite sure why it’s there. Was it supposed to be atop the church? Do the words The wisdom of Solomon it bears hold hidden meaning? The large, white stone has long drawn the curious, crazed, and cabalistic.

Limehouse has long been an other. It was London’s first Chinatown and for Sherlock Holmes and Denis Nayland Smith home to a den of opium, prostitution, and foreign. Sax Rohmer, the creator of Nayland Smith and his nemesis Fu Manchu, had no understanding of Chinese culture but decided to create the villainous Fu Manchu after he’d asked on a ouija board what would make his fortune and the word C-H-I-N-A-M-A-N was spelled out. Anna May Wong lives there in the 1929 film Piccadilly, a film about the very different Londons that still permeate the city.

There’s a scrape of earth at the base of the pyramid, on the face with the inscription. The grass is usually flecked with candle wax and who knows what has been placed beneath it. The apex extends down to a broad reach, or focuses to the heavens, depending on your cosmology or bent. The very meaning of a pyramid is unknown.'

Does the ritual there remove the curse of the werewolf? Support the book and find out. 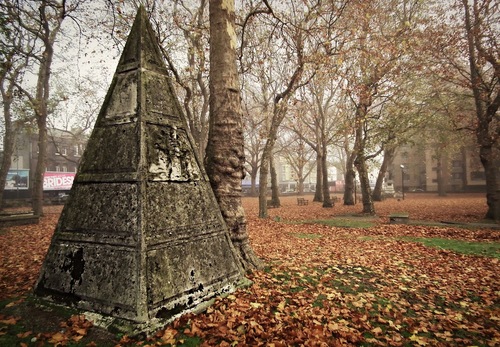