The Gonads website asked for an interview about my skinhead pulp horror, Moonstomp. The book is set in 1979 and is a New English Library style tale of a skinhead werewolf. I asked Garry, who runs the site, what he wanted to know, and he said I should ask my own questions. This seemed a bit weird, it might have been the done thing at Sounds, but not for me. I asked a few hooligans what they’d like to know about the book , and me as a writer; thankfully some were interested.

Matthew Worley commented that: Moonstomp continues a tradition of subcultural pulp novel that seemed to have more or less disappeared by the 1980s, why did you want bring it back?

I loved reading the New English Library and the like, also those Pan Book of Horror Stories that used to do the rounds at school. There’s been nothing like them for a while. I’m a usually a poet, but getting older and the angry young audiences, rightly, don’t get all my references so I knew it was time to branch out with my writing.

It’s always irked me that most writing about subculture is usually wrong, mostly because the people writing it haven’t lived that particular subculture. Academics frequently describe but rarely understand (sorry Professor Worley!). I wanted to write something and get all the details right; the music, clothes, atmosphere. I know I lose interest in books and films as soon as a detail is wrong, so wanted to be true to my own yoof.

Also, I’d been laid off work and had a month to kill to started writing then. Most of the werewolf victims are my old managers.

Matthew: You're mainly known for poetry: for those unfamiliar with its working class link, who would you recommend checking out?

Yes, on the back of me reminiscing I wrote a load of poems about my teenage girlfriends... from when I was a teenager. These are now out as No Weakeners from Bad Betty Press.

Poetry seems to be mired in identity politics and ‘activists’ been anything but active but there are some great poets doing exciting work. Emily Harrison writes funny, strong work about mental health. It’s easy to do that badly and as a victim – she does neither. My old mate Salena Godden is always a force for joy and good, she’s doing great stuff and rather than doing it the easy way has kept her integrity, more power to her. Sophie Cameron is easily the filthiest, and funniest, poet you’re likely to see. Dean Wilson from Hull is always a delight, whether with social media poetry or live in his distinctive accent. I’m pleased to give a special mention to the freshest cockney poet, Lilly Driscoll: new boots and panties for the Instagram age.

The effervescent Theresa Macauley asked: Where are you geographically in your mind when you’re writing?

I’m in the same places I was as a yoof. The book is mainly set around North East London, and the pubs and gigs in it are ones I know well. Not all the pubs mentioned are there now, but they were all real places.

The first werewolf killing takes place in the street I used to look out onto when I was working, and the one I used to walk up to get my lunch.

I know most of the locations well, but memory fades and there bits outside of my usual manor so I’ve a 1960s A to Z book, and also a handy Evening Standard Guide to London Pubs from 1973. I’ve also revisited locations to check things out. The one I was last at was the Limehouse Pyramid, which features in the upcoming Shine On Me.

There was a bit of interest in the geography of the book, the mighty Peyvand Sadeghian wanted to know: How does the area you live in inform your work?

I started writing a spoof of Richard Allen’s Suedehead, but more and more of my life kept creeping in, so I ditched the 4 chapters I’d written and started again with more of my own experiences in what I was writing.

Stamford Hill is a strange area, it’s on the edge of a lot of things, it’s still a village. That made it fun to write about. It’s not your typical cardboard cockney place. Alexander Baron also wrote about the area.

I like the insularity and difference in Stamford Hill, and I think that goes with punk and reggae, not being mainstream music, and especially the clothes. I write about them a lot, well dressed kids making a statement was a big part of the 70s and 80s, and again it is stepping outside of the mainstream.

I’m regularly at car boot sales and the like and I’ve picked some fascinating, and bizarre, books on London history and the occult that have fed into the book. I also generally write with records from the year the book is set in: 1979 for Moonstomp, and 1980 for Shine On Me. I play 3 albums whilst I’m writing: a punk one, a reggae one, and one that takes my fancy.

I’ve got tons of vinyl, and have also been picking up many of the records I didn’t back then, lots of mod revival passed me by, and I’ve enjoyed some of the terrible ones.

I approach them carefully! They are trickier to write, me being a middle aged male. I wouldn’t want to write something without women in it, they are half the world. I try to avoid the obvious stereotypes and keep the speech true.

Several women have read through for me, and their input has been helpful.

The sex scenes were definitely the most difficult thing to write. They were also the bits most scrutinised in my local. Several Confessions books were referred to but at the end of the day I told myself that if Alan Titchmarsh can win a Bad Sex Award then I can too.

Peyvand made a similar point: It's very easy in current discourse for "working class" to be shorthand for "white Male working class". However Moonstomp makes sure to have an array of characters beyond just that. How much is this a conscious decision?

The book is set in London, and London of the late 70s so there’s a mix of people that reflects that, and is like that of the manor I’m writing about.

I read an interview with a female Black author who said she deliberately didn’t describe people by colour in her work. I thought that was interesting and I consciously did the same thing. There are people of different backgrounds in the book, but unless it comes up in conversation they are not described by colour. The working class is a big mix of people, and that’s one of the things I like best about us. We need the Peyvands as much as the Tims.

Young skinhead, of the Tottenham variety, Maor Yav chipped: Seeing lots of the book and story background is based around your experience, what's the story with the fight scenes? Did boneheads really sport Union Jack socks?

Some of the fights are real, there’s one where a lad loses a shoe. That happened to my mate Philip on a 73 bus in Kings Cross. I had a few tear ups, and my share of bruises. The times were very violent: politics, area, music, the basic inability of people to go out and have a quiet beer. Myself included.

Yes, union jack socks were a thing, not a look I sported. Moccasins and Starsky cardigans was a look back then though you don’t see that now with the social meeja skinheads. That’s a style that should make a comeback.

It was a joke really. I was on a panel representing zines, and the publisher was also on it. I threw a Grauniad journo under the bus and afterwards myself and the publisher had a few beers. He had Dave Hill’s autobiography coming out and we got talking from there to 70s pulp. I joked I had a book about a skinhead werewolf whose sideburns got really big when the full moon was out.

He thought I was serious and wanted to publish. I heard opportunity knocking and went with it. Initially I was copying Richard Allen’s Suedehead, but more and more of my own life and imagination came in so I scrapped what I’d written and started again.

The skinhead becomes a werewolf after being bitten by Lene Lovich. I thought she’d be good as she was a bit weird, has a sense of humour and I saw her do some tight gigs. Legally I had to check with her as she’s mentioned in the book. She listened to me lay out the story and then asked when the book was set. 1979, I told. “That’s fine,” she said, “I wasn’t a vegetarian then.” She was superb.

Paul also asked about my favourite youth cult novel. I’d have to go with Dick Morland’s  Albion! Albion!. It’s a dystopian future, they’re rarely optimistic in pulp but they weren’t wrong, where Britain is divided and governed by rival football gangs. Garry would be pleased to know London under the sway of Charlton Athletic.

Will there be a sequel? Paul also enquired. Yes, it’s set in 1980. The werewolf is still werewolfing and this time there’s mod witches, and a dead Crass fan. 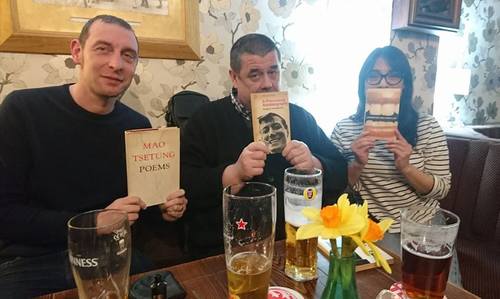