Some of the witchery that takes place in the book is set in the old Huguenot houses around Brick Lane and Spitalfields. These days they look lovely but it was quite a different story in 1980, when the book is set.
Author of 'The Rats' James Herbert, whose father, Herbert Herbert, had a fruit and veg stall on Brick Lane, recalled that in his childhood "Rats ran in the alleyways and over the bomb sites around us – scenes that inspired my imagination and early gift for telling dark tales to my friends."

In Shine On Me, the street as it was in 1980 is briefly described: 'The old houses around Brick Lane were dilapidated and without great demand, and so cheap. The windows had wooden shutters, to hide the rotten inside from the out, or the rotten outside from the in. The smell of fruit and veg from Spitalfields Market, just across Commercial Street, was rarely fresh and tramps had kept a smutty fire burning rubbish for years. The landlord was happy to rent to three good looking girls, despite all his weaselling no extras had come his way. None would.' 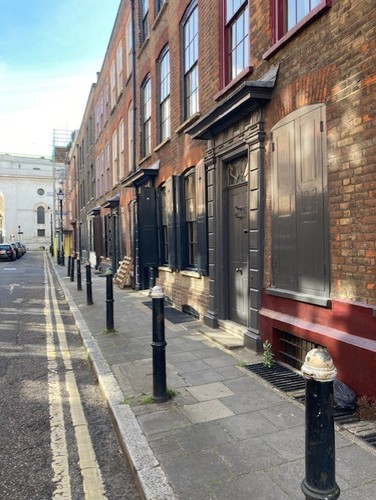