Interview I did last year with my mates over at Boots N Booze zine from Santa Cruz, USA,

We sat down with legendary author and Skinhead, Tim Wells to ask him about his book 'Moonstomp'! Check it out!

How long have you been writing?

Since the late 70s, but gigging properly as a poet when the Ranters kicked off in the early 80s. I’d not written fiction but got to it in my 50s.

I wrote for several zines, including Zoot and Soul Underground, for newspapers, as well as having a long career as a poet.

How long have you been a skinhead?

Since the 70s. More of a suedehead really, and with a lot of dub and reggae records.

What else have you had published?

I’ve had quite a few poetry collections published. One the skinhead types might like is No Weakeners which is about my teenage girlfriends. From when I was a teenager (I keep having to add that to not seem a wrong ‘un).

It’s written by someone who actually wore Brutus shirts and Frank Wrights. The clothes are right. Most skinhead books get the style wrong. The style is specific to the year it’s set, 1979. Fashions change, in subculture as everywhere else. There’s not a single top button done up shirt in my book thank you very much.

Do you think it has a wider appeal outside of the subculture?

The youthsploitation books by Richard Allen and the like were hugely popular in Britain. At the same time horror collections like the Pan horror anthologies and The Rats by James Herbert (which features a skinhead) were massively popular. There’s a good argument that The Rats was the punk rock of horror fiction.

I deliberately mixed the horror and aggro genres. I wove in some bits from old horror stories to give the feel of a Pan Book of Horror Stories.

There’s a lot of social history in the book too, and bits about London. Research is my favourite bit of writing and the book is all set in an area I know well so I’ve used some of the weird and entertaining bits of local history.

I’ve done some readings with horror writers and this new/old take has gone down well and we’ve had some fun getting away from edgelords and goths. Folk horror is quite the fashion at the moment, and sickeningly academic, but what about those of us that live in the inner cities? We’ve horrors all our own to share.

Is there a sequel in the works?

I’ve done the first draft of one: Shine On Me. It’s a year along, set in 1980. There’re still the skinheads, but there are also mod weetches, and a Crass fan getting werewolfed. I enjoyed writing that chapter.

Are you working on anything else?

I’m working on a building of love… But songs aside I’ve recently done a chapter on dub poetry for an upcoming academic book on the history of British reggae. I’m quite looking forward to that coming up, and me with the academicals? Mi cyaan believe it. 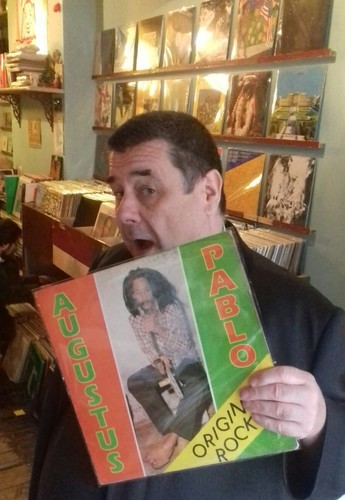