The book is set in 1980 and badges were an integral part of 'the look', be that punk, skinhead, reggae, metal, or whatever. The were pinned to the collars of Harringtons, the lapels of leathers, and even on braces.

There's a bit in chapter 7 of Moonstomp about how badges played their part in meeting people and sussing them out...

'As Joyce came back from the toilet and was strutting it to show off her new t-shirt the skinhead came up to the bar to order a couple more pints. Vera gave him a smile and he gave her a, what he thought was subtle but wasn’t, onceover before paying attention to the badges on her lapel. There was that new Undertones one, a Stiff Records Ian Dury, and Steel Pulse. They seemed to get some approval as he nodded and said: “Steel Pulse… nice.” Badges weren’t only a statement of who you were but also a door to knock.

“I’ve seen ‘em a few times,” she said. Like most punks she had a fair appreciation of reggae and Steel Pulse had been gigging solidly with punk bands with Rock Against Racism.

“I like ‘em too,” the skinhead replied. She was quite hoping they’d get on. She liked the look of him, and the day had been boring enough already.'

There will be some Shine On Me badges, the images of badges on the site at the moment are just placeholder images. They'll look like much more like the book cover and be sweet for your 'arrington, leather, or braces. 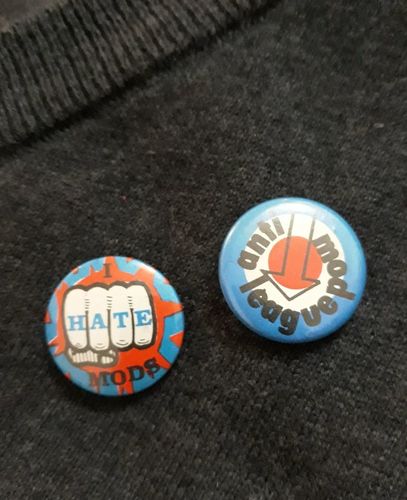