Food is always a sign of class, in every way that can be taken. One of the good things about the Harry Palmer films is how Harry Palmer shows his confidence with good food and coffee. It's a very mod outlook, us working class types should be living well. It's come as a surprise to many when I tell them that Len Deighton, author of the IPCRESS File and the other Harry Palmer books, as well as the superb Bomber, also wrote a weekly cooking strip in the Observer. These were instructive cartoons aimed at "an audience of men unskilled at knowing their way around the kitchen". These appeared between 1962 and 1966, with the book itself being first published in 1965. The sixties weren't just modern jazz and bum freezer jackets. One of the strips can be seen in the 1965 film, The IPCRESS File with Michael Caine beautifully playing Harry Palmer.

In his succesful years Deighton explained what had started his cooking career. "My mother was one of 16 children; so there was a lot of cooking to do, and she did her share. During the war we lived in Gloucester Place Mews in Marylebone. My father was the chauffeur for a family living in the large house behind us. Sometimes my mother would cook in its kitchens, but she also cooked in a nightclub off Baker Street. She'd come home with jolly stories about the extravagant menu names they gave her simple dishes."

The Action Cook Book's has some  food tht wouldn't be for all the Observer's readers, Mrs Deighton can, again, be thanked. "Offal wasn't rationed during the war, and my mother resorted to the sort of food she'd eaten as a child: tripe and onions, brains, tongue and braised rabbit. I remember those dishes with great pleasure and I can never get them as good as they tasted when my mother served them."

Both Moonstomp and Shine On Me have a nod to the Action Cook Book. It's important to me as no-nonsense good food that we deserve, a slice of living as good as we can. Deighton noted: "The IPCRESS File is about spies on the surface, but it's also really about a grammar school boy among public school boys and the difficulties he faces."

As Pete Meaden told the NME in 1975, "Modism, Mod living, is an aphorism for clean living under difficult circumstances." Get the Bialetti on the stove. 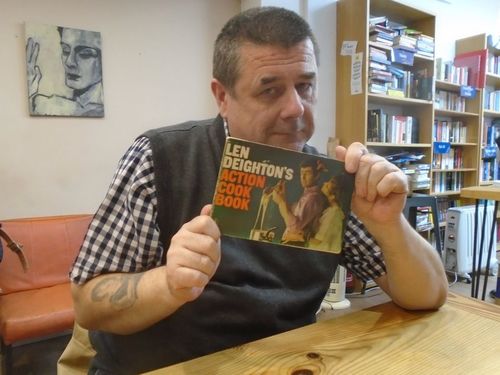