(Cross-posting this from Kickstarter, where things are going great — 88% funded with 22 days to go! Which means we're at approximately 95% funded overall.)

We're almost there! Just a little more and we'll be funded.

In the meantime, I thought it'd be nice to share a few cool things I've found in my research and interviews so far.

I've been talking to people across a broad spectrum of roles during the shareware era — people who earned a living through shareware sales as developers, publishers, magazine editors, BBS operators, and/or distributors, and also people who did one or more of those things only as a hobby or side job. Shareware was a big field, and for a long time there was room for small players to get just as much attention as the big ones, but you couldn't always predict who or what would make good money.

Take Captain Comic (or The Adventures of Captain Comic, to use the full title), for example. It is widely regarded as one of the best and most-influential shareware games of all time. Writer Richard Cobbett once called it the first PC platform game that became iconic. It was the colourful action game with big sprites that inspired all the other DOS games of that sort that followed. It even had a sequel and a NES port. But creator Mike Denio never saw much income from the game, and he continued working full-time at Texas Instruments for the duration of his stint in shareware. 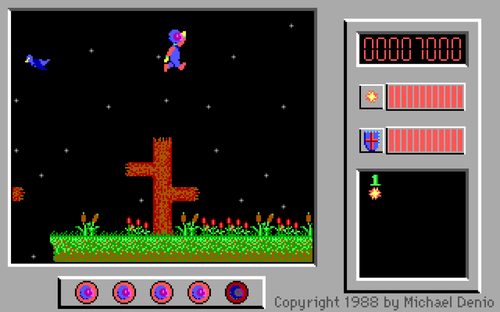 He's still there, by the way, and no he doesn't want to talk about the Comic games anymore. He told me over email that he enjoyed that time, and he's happy some people enjoyed his work, but he'd like "to leave it all in the past" — lest he turn into Cranky Kong.

Apogee/3D Realms founder Scott Miller has been much more willing to take that trip down memory lane. He's helping me out where he can. There's lots to share about him and his work, and I couldn't decide what to pick for using here, so I've just gone into my interview transcript and picked out a random part for your perusal. It's on Apogee's adoption of the Software Creations BBS as its "home BBS" — sort of a website before there were websites. I've talked to a few other people connected to this part of Apogee's history as well (and I hope to soon add one more — Software Creations sysop/founder Dan Linton), so it should be a good section in the book.

We decided to partner with them. Dan Linton was the guy running it, and I had gone down to Boston where he lived several times. And he was really a very smart technical guy, and he had like a T3 coming into his house. And he had a whole basement that was just nothing but servers. And we were sending him I think $30,000 a month just to pay bills, to keep expanding, to keep the place up and running, just to give people a one-stop sort of Internet store to get our games. And to make sure that, you know, there was enough dial-in channels to handle it all. And so on.

So our idea was let's build a very secure, very sort of reliable place, you know, online. We didn't call it online back in those days, but it's really the same thing. An online place that people can go to and, you know, it would be the first place that we would release our games. We would be — you know, we had our beta group. Our Private Beta group met there. We had chat channels there that we would talk to and stuff, and we'd hired a couple people to sort of represent Apogee online, and that was their primary place to sort of hang out and spread news. So we were trying to create a place that people knew was like our home online.

Mmm, and why was that important? Was that a branding thing? Or more than that?

I've never thought of it that way. But I think that's the best way to think about it.

One of my favourite interviews so far was with the creator of two delightful graphic adventures for the Atari ST from the early '90s. Both games are about a grumpy old guy in a wheelchair who's looking for something he misplaced: Grandad...and the Quest for the Holey Vest and then Grandad II: In Search of Sandwiches. They're both great games, impressive both for their humour and for the way they balance the mundane with the extraordinary. 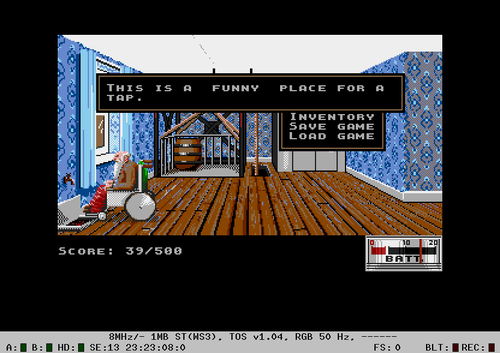 They were inspired by Sierra's adventure games (among other things). Creator Ian Scott thought Sierra's AGI engine was too clunky, frustrating, and pedantic. He thought he could do better. Here's what he did:

I came up with the idea of using the joystick to issue the commands rather than have to type 'exactly' what the game needed to progress.

An old geezer in a wheelchair came about because of memory restrictions of the Atari ST. There just wasn’t enough memory to display the room (with some minor animations) and have an animated main character at the same time. (Certainly not coding in STOS anyway). So I thought about how I could have someone moving around whilst being still. A wheelchair seemed the obvious solution. As far as the character himself - well that was just me, older and with a beard. These days, at the age of 55, I am a real Grandad and I am as cynical as ever. Thankfully, I don’t need a wheelchair.

I have lots of other things that I'd love to share about my research and interviews, but this is getting long, so I'll leave you with two quick things:

First, this 1992 article from The Guardian newspaper about shareware's viability as a business model in the UK. 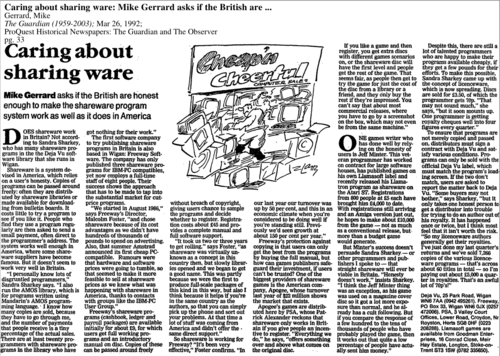 (For easier reading, grab the PDF from my Dropbox.)

And lastly, a reminder that crowdfunding projects like this rely on people like you to help spread the word and get more backers on board. The more money we can raise here, the better the book will be. So, in true shareware spirit, keep sharing! (And while we're happy for new backers on either here or Kickstarter, right now, for psychological reasons [some people are more likely to support a project that they see as successful], I'd prefer you point people to the Kickstarter.)

is the book going to have all those filler words like "you know"? It was quite hard to read Scott Miller's interview as it appears over and over, I get wanting to keep the conversational tone but it's really rough

No, there'll be few if any occurrences of filler words like "you know" in the book. I usually omit filler words when I quote people in my writing.

And to be clear, the interviews will be incorporated into the narrative text — so a lot of longer quotes will be broken up into small chunks and interspersed through the prose (as you'll find in the majority of narrative non-fiction and in my previous book).

A first edition copy of the hardback, plus the ebook.
Choose this reward
£10
99 pledges