Sorry I missed the update last month. I was busy with lots of things — a Shareware Heroes copyedit review, podcast stuff, Secret History of Mac Gaming Expanded Edition launch prep, FPS documentary work, freelance editing work on somebody else's book, and preparing for the impending arrival of my first child — and never found the time to write something out for you.

A few days ago I finished my review of the copyedit of the manuscript, which fixed up some remaining typos and grammar and syntax errors, tweaked some styling choices (like when to spell out numbers versus using numerals), and also helped me identify several places where I'd been unclear with my language choice or phrasing.

I briefly noted at one point, for instance, that the graphical roguelike UnReal World shifted its design and theme in the late 90s — several years after its first release — to eschew the traditional fantasy theme and town+dungeon gameplay loop of the genre and instead embrace Iron Age Nordic history with wilderness survival elements. But my phrasing in the original draft evidently wasn't clear enough because the copyeditor had changed the meaning to say that it previously had "a traditional fantasy theme", as though the change was mostly cosmetic. This is why editors matter; they hone in on ambiguous, unclear, or contradictory language and help you express your ideas better. (It's also why writers should always get a look at their work post-edit, in case the editor misunderstood something.)

With that done, the book now heads to the text designer for typesetting and page layout. We'll have screenshots of many games included in the book; I've captured all of those myself and where appropriate scaled them up to 640x480 pixels to correct the aspect ratio. I believe even the colour screenshots will be printed in black and white, unfortunately, due to budget constraints, but I'll see if I can also incorporate them into my database of shareware games/people/companies that I've mentioned previously will be turning from private research aide to public resource. On that note, here's a screenshot of a company entry from that database as it currently looks. 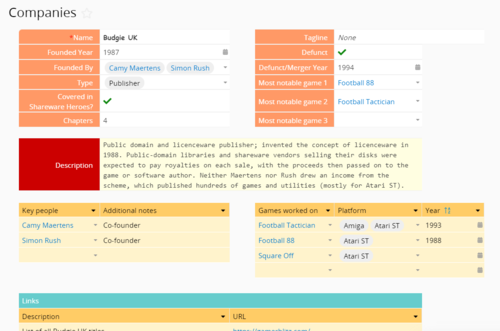 The book will also include a section of colour images, but we expect these will mostly be photographs and scans provided by people interviewed for the book and/or by some of you. Thank you to everyone who has sent me photos of shareware disks and other relevant stuff. If anyone has stuff they haven't shown me that they'd be happy to see included in the book, please get in touch soon over Twitter (@MossRC) or email (richard at sharewareheroes dot com).

I also heard this week that the trade release of the book (meaning the version you can buy on Amazon et al) is likely to be in paperback, as Unbound's sales team thinks that will play better for us in the US market. All backers on Kickstarter and Unbound will receive a hardback edition. I don't know yet what — if any — other differences there'll be between the trade and backer releases.

I figure many of you will be interested in my other book, The Secret History of Mac Gaming, which has just been re-published by Bitmap Books in a revised Expanded Edition. I've written about 6,000 extra words, covering such fine games as Snood and The Dungeon of Doom as well as the work of Stick Man Games (plus some other stuff such as the short-lived Mac Action magazine). The new edition also adds a gorgeous timeline of key moments in Mac gaming history from 1984 to 2000, along with a couple of icon galleries, a foreword by 7th Guest co-creator Graeme Devine, and loads more images. And it revises the text layout and margins. Here are a few photos of my own copy: 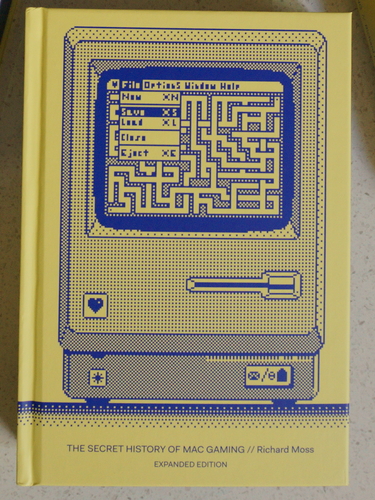 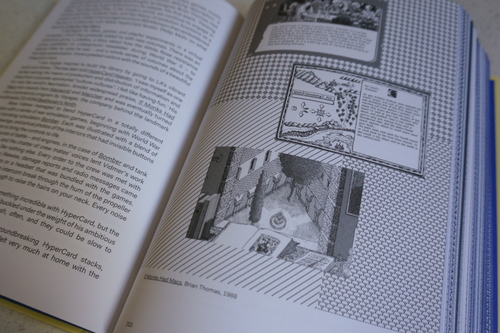 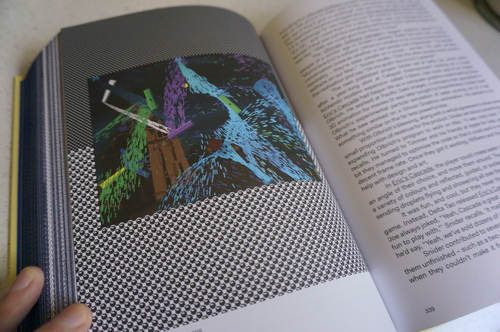 If you're interested, you can get it direct from Bitmap or wait a little longer (maybe just a few days) for the new edition to get onto Amazon. My fellow Australians will hopefully soon be able to buy it from Pixel Crib, but you'd have to check with them to confirm (last I heard they were working on it). And if you have the first edition and only want the new text and timeline, I'll have an ebook/digital addon pack thing available to buy from me as soon as I find the time to compile it. Sign up to my low-volume announcements newsletter or follow me on Twitter for news on that when it's ready.

Glad to hear about the progress on Shareware Heros.

The Secret History of Mac Gaming Expanded Edition hardcover is outstanding. Just received my copy & it's been hard to put it down. The only omission that I've noticed is that Klondike by Michael Casteel (https://www.casteel.org/) wasn't noted anywhere in the book. A glaring omission IMO, as it was the first game/app that I paid the shareware registration fee for, back in the late 80s. He still has the game updated & going strong on M1 based Macs, too. I only wish that I had the gameplay records going all the way back to 1988, as I've played at least 10,000+ games.

Thanks Glen! Michael Casteel is on the list of interview targets for volume 2 (yes, there'll be a volume 2! I'm slowly working through interviews and research for it). It's amazing how he and Ken Winograd and a couple of others whose names are escaping me have kept their games going for so many years, through so many processor and OS transitions.

A first edition copy of the hardback, plus the ebook.
Choose this reward
£10
107 pledges