I hope you had a good end to your 2018. I know it's been a while since my last update, but I've not stopped working on the book and I'm trying now to get some real momentum going again on this crowdfunding campaign. For that I'll need your help, but first here's a little encouragement to bolster your enthusiasm.

I'm actively tracking down more of the people I'd like to talk to for the book and steadily making my way through interviews with them. I've mentioned some of these people in previous updates (folks like Epic founder Tim Sweeney and id Software co-founder John Romero, with whom I've exchanged numerous emails and will hopefully be talking at length later this month).

Right now I'm especially focused on Apogee, with Epic to get my attention later, but I'm also broadening my net and snagging various other people from beyond those two big players — and indeed I'll be digging much deeper into the broader 80s/90s shareware games scene after I'm done with those two. (My research plan here is basically to first get a firm grounding in the origins of shareware and rise of shareware gaming, then dig into the stories behind the major players, then circle back and fill in all the blanks of what the smaller, lesser-known guys and gals were doing.)

Here are several people that I've recently talked to on Skype/phone or who I've been interviewing via email:

My research efforts thus far have skewed more towards finding the people I'd like to interview, but I'm also digging up neat bits of trivia about various games and developers. And I'm discovering amazing games I'd never heard of before.

Like two delightful Atari ST games by a fellow in the UK called Ian Scott. The first, Grandad and the Quest for the Holey Vest, follows a surly old guy in a wheelchair (see screenshots and attached video; Ian told me the wheelchair was actually a conceit designed to avoid making a walk animation) as he searches his house, old-school adventure style, for his missing vest. Because it's a bit chilly, and he'd like to put it on. It's a funny game, with impressive art for a one-man project, but it's the personality that I love most about it. And also its sequel, Grandad II: In Search of Sandwiches (this time grandad's searching the local park for his sandwiches, all the while dishing out grumpy old man insults from aboard a motorised trike, because he's a tad peckish). 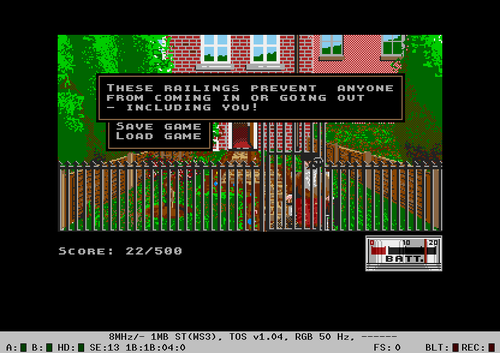 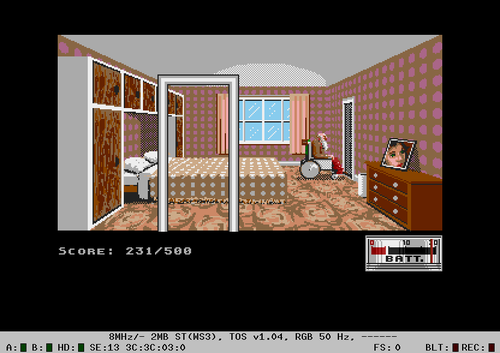 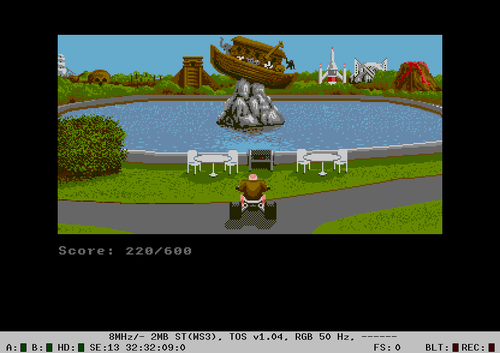 This is the kind of thing that originally attracted me to shareware, back when I was a kid in the 90s digging into great Mac games like Glider and Stunt Copter and Harry the Handsome Executive. It's so cool to discover these lost nuggets now, and to see what inventive things people were doing, under the radar, with the limited technology of the time.

Meanwhile, most of you are probably at least somewhat aware of the massive mainstream success of Epic's Fortnite, which the company is now using to launch its new Steam competitor The Epic Game Store. What's particularly interesting is the parallels this news has to Epic's moves in the market back in 1996. I found this Washington Post article, dated April 24 1996, which talks about Epic's plans to leverage Unreal to conquer traditional games retail. 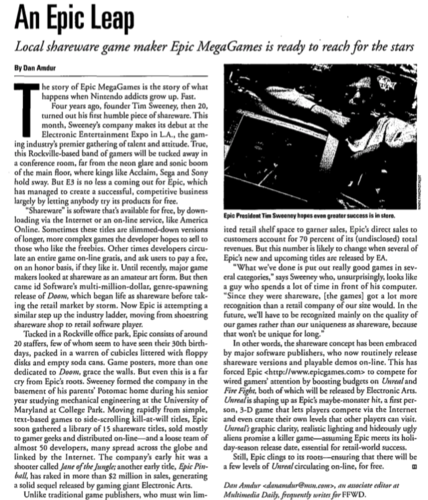 I need your help to spread the word about the campaign

As I write this, we're at 44% funded. We're moving in the right direction, and I'm sure this number will continue to trickle upwards as I make further progress in my research, but we're moving much too slowly.

If we don't make serious progress soon, we're going to have to look at a possible Plan B. Like finding a way to lower the funding goal or even severing the partnership between Unbound and me so that I have to go it alone elsewhere. I don't want to have to cross that bridge. I believe the current plan we have is the best thing for the book. (And no, as far as I'm aware Kickstarter is not currently an option because Unbound hasn't yet published the previous book they funded on there.)

Now if each of you could get just one person to pledge for a hardback tomorrow, we'd be funded. So if you know anyone who might be interested in the book, get them to back it. If you've told someone about this campaign before, remind them now. If you have a suggestion for something we could do to drum up more attention or pledges, give us a shout — or, if appropriate, see if you can do that yourself. If you're hoping for another reward option, let us know and we'll try to make it happen.

And as always, if you have questions, comments, or suggestions, let me know. You can leave a comment here or on the campaign page, or Tweet me @MossRC or email me on rich.c.moss at gmail.

Richard, I want to back this project, but Unbound is killing it for me. I'm in the US and it's more than $16 to ship, and it's not really fair to backers to see the book later on amazon at a lower cost.

A first edition copy of the hardback, plus the ebook.
Pre-order this reward
£10
112 pledges