I got the development edit back on Friday, and the feedback is tremendously-upbeat. Here's a snippet: 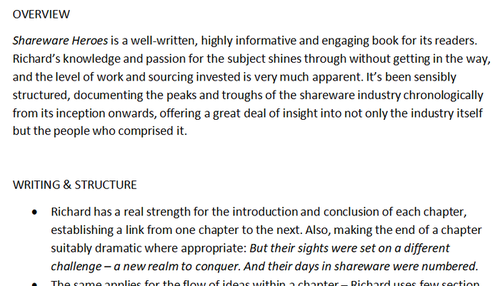 I'd been hoping it was a strong manuscript, but I knew when I submitted that I was too close to it to be able to judge for myself — so to get this praise back from a stranger (via my editor at Unbound) is a great relief for me, and I suspect also encouraging news for all of you.

For those who don't know, the development edit is sort of a big-picture edit. Its purpose is to identify any structural issues or other substantive problems that need work, to suggest changes that might make the book more readable, and to help flag things that need more attention at the next stage: the copy edit, or sub edit.

So now I need to go through the manuscript and respond to comments made by the development editor, tweaking the text as I feel appropriate along the way, then in a few weeks I'll pass it back to my editor. She'll look things over and write a brief for the copyeditor, who then does the detailed line edits.

Since I've mentioned them before, I wanted to give you a quick update also on two other projects:

The Secret History of Mac Gaming Expanded Edition will be published by Bitmap Books near the end of this year. They've just (on Saturday) sent me a draft on the design for that, complete with all the extra text and images I've pulled together, and it's looking amazing. I can't wait to share more details about it.

And the film I'm working on as a writer and producer, First Person Shooter - the Definitive FPS Documentary, is now on Kickstarter (and 172% funded as I publish this post).

We've assembled an incredible cast of 45+ industry legends for the film, including several key figures from the shareware scene, so do check it out if you have any interest whatsoever in the genre (and scroll down a bit on the campaign page for the full cast list).

You can also follow us @fpsdoc on Twitter, Instagram, and Facebook, where we're posting cool 59-second daily videos during the campaign that I and our director created to remind you about some of the amazing games we'll be talking about.

A first edition copy of the hardback, plus the ebook.
Pre-order this reward
£10
107 pledges