Sew on the Go: a maker's journey

Three months in the countryside 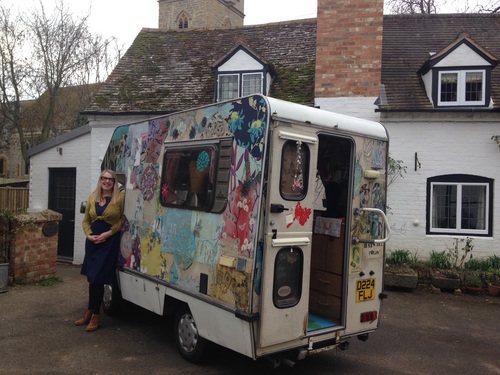 At the end of last year I heard that I had been awarded a prestigious writing sabbatical with The Hosking Houses Trust which offers women writers (over 40) a bursary and a residency in an 18th Century cottage in a small village just outside of Stratford Upon Avon. I was lucky enough to have been awarded a prize by the Trust before, five years ago in fact, when I was working on a previous book called The Modern Girl’s Guide to Hatmaking (Kyle Books).

Whilst I enjoyed my residency enormously, I found the lack of light in the cottage quite difficult. As a maker, as well as a writer, I need good natural light whilst I work, and to be honest, even writing is helped along for me enormously when I have a ‘room with a view’! Sarah Hosking who set up the Trust herself a few years ago, took me at my word, and set about trying to raise the funds to build a studio extension to the cottage. Over the last few months with a huge dollop of determination, sheer grit and hard work, Sarah has not only managed to bring in the finance, but has also overseen the building of the studio - no mean feat.

I am thrilled to be the first person to use it - and I couldn’t be more honoured! I am sure that the studio addition will open up potential residencies for artists as well as writers.

In my next update I’ll give you a glimpse inside!

For now - here’s a picture of Bambi and me in front of the cottage after arriving last weekend!

A big thankyou to The Hosking Houses Trust and to all of you for your continued support and enthusiasm. One more push and we’ll be there!