An anthology of the finest of travel literature

Scraps of Wool gets wings

Thank you all my Supporters. For years the concept was a chrysalis into which ideas were fed. Now with your fertilisation, the wings are grown and it will fly.

The crowdfunding process has drawn in so many new editorial contributions, that now there is little room left for me in this shed. The richness of the contributions is the reward for the work.

Some of the ideas are new to me:

Nicholas Best (author of Five Days that Shocked the World, Happy Valley, etc.) introduced me to the moment in Joseph Thomson's Through Masai Land (1855) when he first sighted snow at the Equator. It was the book that inspired Rider Haggard to write King Solomon's Mines.

Patrick Arning found the naturalist Charles Waterton's Wanderings in South America and his bare handed capture of a cayman in Guyana.

Thank you to the many authors who themselves have become Supporters. Jan Morris set the trend (please see Sept 12 posting which describes her singing her favourite passage to me on the phone from Wales); then two more heros of travel literature, Colin Thubron and Dervla Murphy joined. Few modern writers have had more of their books recommended to me than these two. Both have also sent their own choices. Colin Thubron has proposed many passages including a glorious vignette from Freya Stark's Ionia.

Dervla has sent pages of recommendations, both obscure (an Anon grand tourist published in 1787 by John Murray) and popular. They came typed and hand corrected on what looks like an electric typewriter. See below.

In the past few days John Gimlette (Wild Coast; At the Tomb of the Inflatable Pig) has joined. So has Rory MacLean (Stalin's Nose; the very recently published and succesful Berlin; The Oatmeal Ark on the Scottish Isles; Under the Dragon about Burma). Rory has in the last week also launched his own book (with travel writer and photographer Nick Danziger) on Unbound.

Some of Dervla Murphy's thoughts on one of her idols (and mine) the 19thC solo traveller, Isabella Bird. Here Isabella is in the Rockies, a year or so later she will be in Japan. 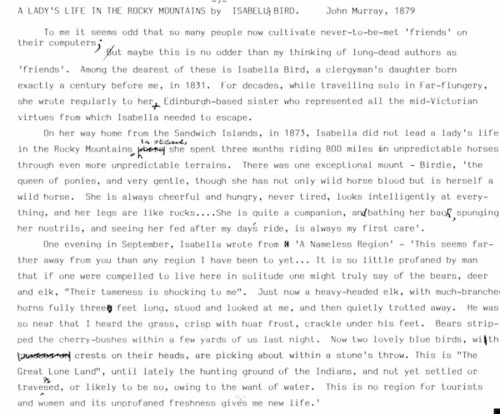