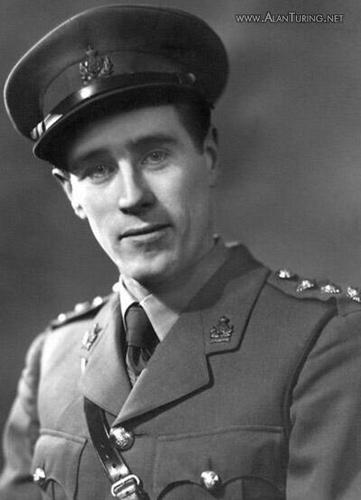 I received the extremely sad news this afternoon that Captain Jerry Roberts, Bletchley Park codebreaker and great Bletchley Park champion died last night. Jerry was the first codebreaker to get in touch with me after I was on BBC News in July 2008 asking people to help Bletchley Park. He was a wonderful man, really dedicated to raising awareness of Bletchley Park and his 3 Ts: (Bill) Tutte, Tommy (Flowers) and the Testery. I will miss him very much.

Here is an excerpt from my book about my first meeting with Jerry and his devoted wife Mei in August 2008.

Captain Jerry Roberts - as sharp as a razor

When I went back into the office that week and checked my voicemail, I found that I had a message from someone called Captain Jerry Roberts asking me to get in touch with him about Bletchley Park. I looked him up online, he sounded very distinguished, and was a Bletchley Park veteran. Very exciting. I gave him a ring and we chatted for some time about how Bletchley Park needed funding, we were like minds. Jerry had been a linguist and senior codebreaker during the war at Bletchley Park and had been a shift leader in the Testery, one of the vital component parts of the code-breaking operation at Bletchley.

Jerry very kindly invited me over for lunch the next week at their flat in Pimlico. How exciting! Here's my blogpost from the day. 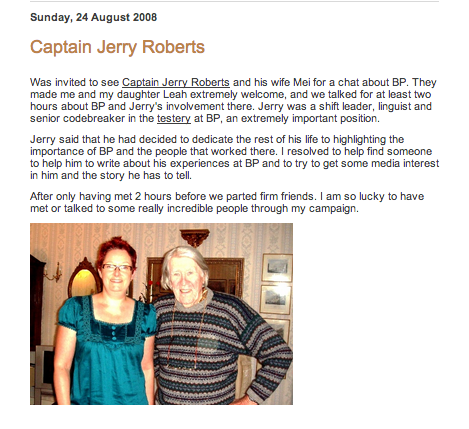 Lunch with Jerry and his wife Mei was wonderful. They were both such lovely people and obviously desperately keen to tell the world about what had happened at Bletchley Park and how important it was. Jerry told me a bit about his work at Bletchley, about decoding messages from Hitler himself and about working for months in a room with Bill Tutte who he thought was not “earning his corn” until Tutte’s major breakthrough with “Tunny”. So many great stories.

I asked Jerry if he had written down all of his experiences, and said how great it would be if he published  an autobiography. Jerry said that he wanted to but that due to his age he was finding it difficult. He was around 90 years old at that time and although obviously extremely sharp mentally, his body was starting to let him down. He was getting tired in the afternoons, so would have a nap each afternoon, his stamina was not what it had been.

We had lunch and Jerry told me that he was dedicating the rest of his life to highlighting the importance of Bletchley Park and the three Ts: Bill Tutte, Tommy Flowers and the Testery. Jerry had worked with Bill Tutte as mentioned above and told me that it was shocking that Tutte had received almost no recognition at all from the government for his fundamental work at Bletchley. He had gone to Canada after the war and carved out a career as a distinguished mathematician there, no one knowing that his work had been pivital in winning the war. Tommy Flowers had also had little recognition. He had, at his own expense, built Colossus, the world’s first programmable, digital computer to industrialise the breaking of the Lorenz code at Bletchley. Flowers was a Post Office engineer working at Dollis Hill during the war, he invented and built Colossus there and then took it up to Bletchley. Similar to Bill Tutte, Tommy Flowers was given almost no recognition after the war, like everyone else that worked there he signed the Official Secrets Act and was therefore never allowed to speak about it. The Testery was the operational unit at Bletchley Park that Jerry had worked in with Bill Tutte and been shift leader for. It was named The Testery after its leader Ralph Tester, a protocol at Bletchley Park was that the operational units were named after those that lead them, I.e. Max Newman ran the Newmanry etc. 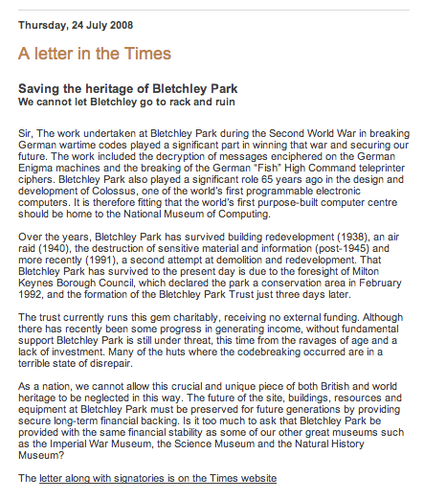 Over a lovely lunch prepared by Jerry’s devoted wife Mei we chatted about Jerry’s life and experience, the letter to the Times, and our common bond of wanting to make sure that the profile of Bletchley Park was raised in order to safeguard its future. We talked about various ideas along this theme and all felt happy to have found each other. Mei was very proud of Jerry’s great intellect and considerable achievements. She told me how he spent a lot of time on his hobby which was the Stock Market, he was always reading about stocks and shares. She then asked Jerry

“How much was it that you got last week Jerry from your buying and selling shares, was it six thousand pounds?”

“Sixty-five thousand” came the matter of fact reply from the other room.

Jerry might have looked like an old man, but he was obviously still as sharp as a razor. Fabulous.

I really do love it when people belie their appearance, especially when someone as unassuming and humble as Jerry, show in their intellect or humour a fascinating inner life that is to the outsider barely discernable at the outset of the relationship.

We talked for a few hours that day and left fast friends with a common purpose. It was clear that Jerry knew an amazing amount about what had happened at Bletchley and why it was important. I was so excited to have met and spent time with him and Mei. I really wanted to find someone to help Jerry write his autobiography as he knew so much about what had happened there. I had, and still have a real sense of urgency around finding people who worked at Bletchley and capturing their memories. So little is known of the whole intricate picture of what happened there, we need as many memories from as many people as possible who worked there to build up an anywhere near complete picture. I left resolved to find someone to help Jerry write his autobiography, it was an important story that needed to be heard.