The recent very sad death of the fabulous female codebreaker Mavis Batey has reminded me how we are now getting close to the time when there will be no more Bletchley Park codebreakers alive. This is something that has worried me from the time when I first visited in 2003. Over the last 10 years I've got to know quite a few veterans and to a person have always been extremely impressed and humbled. Every conversation that I have had has been interesting, always delivered with great intelligence, humility and a fabulous sense of humour. In the back of my mind whilst speaking to veterans I always hear Churchill's words "Never was so much owed by so many to so few". Fabulous people that we owe so much.

I left Bletchley Park after my first visit in 2003, having just found out about the massive contribution that women made to the codebreaking effort, determined to try and record the stories of the female codebreakers. It took me several years to get some funding to help make that happen, but eventually I did and thanks to the British Computer Society and the now defunct UK Resource Centre for Women in Science Engineering and Technology we at BCSWomen interviewed 14 women for the "Women of Station X" project. One of those women was Mavis Batey.

"It is often forgotten, amid the inevitable concentration on brilliant codebreakers like Alan Turing and Dilly Knox, that the vast bulk of the people who worked at Bletchley Park during the war were women, and while many of these worked in what might be regarded as menial positions each was important to winning the war. More than that, there were women among them who were themselves quite brilliant codebreakers and Mavis Batey was certainly one of these women. The Battle of Matapan was described by Churchill as the most important British naval victory since Trafalgar, and despite her long-standing modesty on the subject, considerable credit for that victory must go to Mavis."

All of the veterans that I have met have been such interesting people, and Mavis one of the most interesting. I met Mavis a few times over the years, but I think the first time was when I and my friend Professor Caroline Wardle took ACM Turing award winner Fran Allen up to Bletchley Park for the day in September 2008. Here's an excerpt from the draft copy of my book about the day. 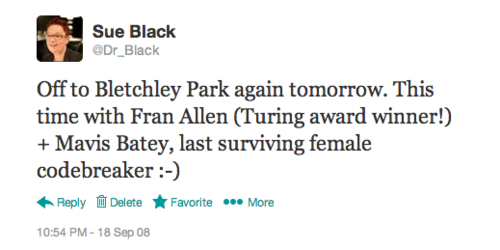 "Fran was coming over to the UK to speak at a British Computer Society conference and really wanted to visit Bletchley Park while she was here. How exciting. I got in touch with Bletchley Park about Fran and Caroline, and they organised a great schedule for us. I hadn’t known at the time but Fran was going to be talking about a code breaking system that IBM built for the National Science Association (NSA) in the later 1950s. Fran had spent a year at the NSA delivering a programming language, Alpha, that she and her colleagues had developed with the NSA. Fran was also really interested in the women at Bletchley Park, we definitely had a lot in common :)

Fran stayed at Caroline’s apartment the night before, then I drove us all up to Bletchley Park together. The journey takes about two hours door to door. When we arrived at Bletchley Park we were met by Simon Greenish and taken into the Mansion for tea. 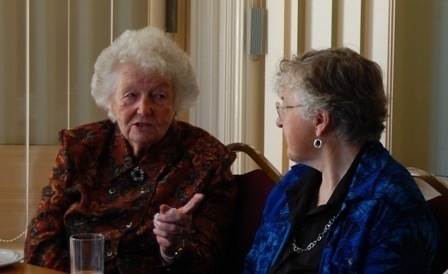 Frank Carter and Brian Oakley talked about Bletchley Park from various aspects with Frank giving a demonstration and explanation of the Enigma machine. Brian told us about some key breakthroughs in the Second World War that had been enabled by intelligence from Bletchley Park. This included the Battle of Cape Matapan, which Churchill regarded to be the greatest Royal Navy victory since Trafalgar. The victory had effectively removed the Italian Navy from the Mediterranean and therefore the war.  The code breaking breakthough had come from a nineteen year old codebreaker working as one of Dilly’s Girls at Bletchley Park. Her name was Mavis Batey. It was such an exciting moment to hear that great story, especially because Mavis was in the room with us. How awesomely cool was that?

Mavis was accompanied by her husband Keith Batey. They were a really lovely couple and although both in their eighties very sprightly and fun to talk to. One of us at some point during the day, it might have been me I can’t remember, asked Mavis how her and Keith met. She told us how they had both been working in the cottages at Bletchley Park during the war. Mavis had liked the look of Keith and so had decided on a ‘test’ to see if Keith felt the same way about her. One day when walking past his desk she had “accidentally” dropped a pencil on the floor next to his desk, reasoning that if he picked it up, he was interested. Ah, those were the days….I wonder if that would work now.

After learning a crazy amount of interesting information from our hosts Fran and Mavis had a good chat about what it was like to work at Bletchley Park. We drank several cups of tea and then gathered to go on a tour of the site. We were joined by the local MP Phyllis Starkey.

The tour was great. We walked all around the site, saw the Colossus rebuild at The National Museum of Computing and the new (at the time) exhibition at Bletchley Park “From Bletchley, with love” which had been curated by Mavis. The James Bond author Ian Fleming had been a liaison officer between Bletchley Park and the Director of Naval Intelligence throughout the war and I’m sure used some of his experiences in his books about James Bond. Did you know that? I bet you didn’t. 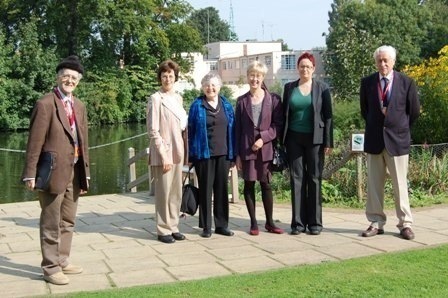 We had a really wonderful day, including posing for some photographs by the lake in the afternoon. Unfortunately Mavis and Keith were unable to stay for the afternoon. We learnt a lot about how the Park had come to be set up, what had happened there and how important that was in our winning of the Second World War. Meeting Mavis and Keith had been wonderful too, it would have been worth going just to talk to them about their experiences there. Of course, finding out about Mavis' incredible codebreaking achievement at the age of nineteen was just fabulous. Oh how I wish we had all heard of these fabulous, true, stories growing up. I remember reading about Edith Cavell and other female spies when I was at school, I would so loved to have known about Mavis Batey too. Role models are so important for us girls."

How many nineteen year old girls have changed the course of history? What a great story.

You can listen to Mavis talking about Bletchley Park and the "special relationship" with the US in the attached audio file recorded in 2007 for the "Women of Station X" project. I absolutely love it when she says when talking about the difference between the British and US at Bletchley Park during World War 2 "everybody was the same...a 19 year old girl could make a contribution".

Mavis also talks about the BRUSA agreement and the UK/US "special relationship", the 300 US military who were stationed at Bletchley Park, and the difference between the way the Brits and the US behaved at Bletchley. There are also two chocolate related stories, Enigma and Kate Winslet. What more could you ask for in a 6 minute audio clip? The clip is at the top of this blogpost. Enjoy :)

NB Brian Oakley who spoke to us with Frank Carter, was an absolutely wonderful man, he died last year. Brian knew everything there was to know about Bletchley Park. I was very fortunate to spend time with him and his lovely wife as they live quite near me. One of the hardest things about being involved with Bletchley Park is getting to know so many really wonderful people who are gradually, one by one, dying. I'm so lucky to have had the opportunity to share a very small part of their lives.

Thanks very much John :)