Getting closer to submission...

I've been working had on getting my first draft submitted to Unbound as soon as I can as we all would like the book to be out this autumn. It's such a massive amount of work. I had respect for authors previously, but that has now deepened to utmost respect for anyone who has ever written a book. It is such a massive task. 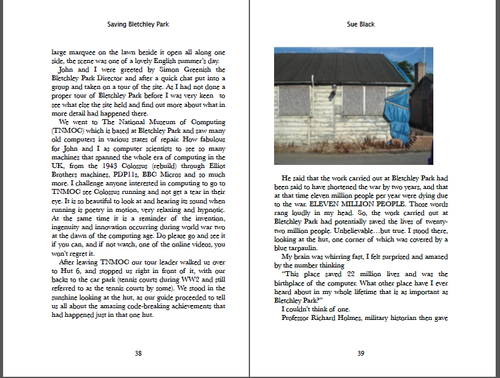 I've been using Scrivener to write my book. It has taken a bit of time to get used to it, but I'm now a convert, I absolutely love it. I love the fact that you can compile in various different formats as you go along to get an idea of what your book will look like when published. I just compiled it in paperback format to see what that would look like. Here's an example snapshot to give you an idea. Remember that this is with unedited photo and text so it will look much better than this and have any grammatical/punctuation errors resolved.

It's very motivating to compile my book now and again as I add more and more content, it helps me to realise that the end is in sight. Yay!!