The economic decline of the countryside slid in first to the fields and farmlands, then to the villages, the market towns. Workforces and wage offers no longer matched and so the workers disappeared. For a while, for the well-heeled, little changed. Marshal kept up his flatteringly matey friendships with the wealthy of the parish. The men, encountering their own physicality only in the pampered confines of a gym, were drawn to his way of treating them as casually manly equals. All customers spoke of his impeccable reputation for quality. Though increasingly, at the golf clubs and spas, people muttered about the economic climate. The gin and tonics were knocked back between head shakes and bluster, bitter soliloquies about betrayal. Hand-in-fist together, planning national strategies that best served them, the rural wealthy and the landed gentry were outraged to discover that they no longer had the ear of government.

Chunks of ice clinked against comfortingly hefty glass in the tremor of a suddenly bankrupt hand. During the chaos of the pandemic, the pattern of wealth in the country shifted. Over time, the losses increased, the economic climate became harder still. Some of the rich remained rich. Some did not. There were heart attacks and suicides. The gentleman farmers, astonishingly quickly found that all they had to bargain with was the long habit of association with those that ruled the country. Friendship can go a long way, in individual cases; some of those bonds survived the fall from grace, but is was the developers in the towns who were courted. What was the wealth of a landowner when no one wanted land?

Marshal, quicker to spot the signs than his complacent customers has shored up some of his options by becoming an installer of new systems for bespoke, single unit flood defences. The wealthy that remain shifted spending from luxury and pleasure to the necessary, to insurance. He is still busy enough to feed the family, busy enough to feel too distant from them, but the days of easy wealth are behind them.

this is the meaning of natural order

your time comes to a close

yes in many ways you spent it well

that was a time, was it not?

but think what you could have done with such gifts

- Dad? Jesse leans his head onto his father’s side, lolling against the movement of his breakfast preparations. Marshal loops an arm around his son’s shoulders.

- Yes? What can I do for you? Jesse pauses, thoughts tumbling un-usefully, realising too late he hasn’t worked out the perfect formula. But he has started now.

- We’ve talked about this before, remember? We don’t know what’s going to happen, if we have to - we might not be able to look after a dog.

- But, we’re not going to move now. This house won’t flood.

- No, it won’t flood. But if work carries on as it is, if, I don’t know Jesse, there are still quite a lot of ifs and it would be harder if we had a dog too. Jesse detaches himself, sits at the table. He is thinking furiously, looking for the chink in his father’s argument. Looking for a way to reframe the question. It’s beyond him. He will try to talk to his mum he thinks, later, when she’s in a good mood. As soon as Marshal leaves, Jesse puts on his shoes and goes to the woods. It is earlier to be out than he is used to. He notices a softness in the air, the faint hush of a day not fully awake. He pauses at the gate to look over the field, just for a moment, to check where the cows are. They are sitting down. Big as sofas. He wonders if they are still sleeping. He scurries the last yards.

The shelter is still intact. He can hear Mister inside, can see the snuffle of a black nose between gaps in the construction. He pulls away the stones, flints fallen from a breach in the top of the barn wall. The puppy is overjoyed, leaps up at the crouching boy. Jesse picks up the small body, so intent on licking his face that he forgets to be afraid of the encircling arms.

we see you, boy

we see your gentle heart

it has work to do

The village is bristling, agitation disturbs the smooth nap of village life. A group of white nationalists have moved into Little Denton, a village less than three miles by road and only a long mile on woodland paths. Little Denton is a quiet place, or it used to be. There had once been a fierce cricket rivalry but neither village could muster a team now.

John, who farms cereal crops as part of a collective surviving on hard work and husks comes by, telling how he had seen them moving into some empty houses on Elm Close. He despairs he says. Might as well be in the bloody city.

He goes round to Gopal Malik’s house. The two men had shared a passion for maintaining hedgerows for wildlife. But Gopal died. John misses him, the time spent working hard on something rewardingly beneficial followed by a well earned pint in whichever village pub was nearest. Over the years he had come to know Gopal’s two daughters, though they had never lived in the village. Chetna is spending some weeks in her father’s house while she sets straight his affairs. John wants to warn her about the newcomers. Chetna sighs. She had thought that leaving the city might mean a break from the anxiety of escalating tension. A weight slides over her shoulders; the donning of a wry courage she had hoped she needn’t carry here.

- Look, just shout if you ever need me. If any of those little shits gives you any trouble, just shout.

we all ever did

from the flaw of cruelty

to be called into use

is it in the marrow? or in the mind?

it seems part of the design

The children are told to keep away from Little Denton, luckily beyond the range of their regular play. Jesse spends all the time he can in the clearing behind the farm and the nearby woods with Mister. He discovers new ways to sneak food out of the house. He dreams all day of a woodland patch of sun and the chance to play with his new friend.

They walk long, unnoticed ranges through the woods. They explore random paths. They loop towards and away from each other, walk side by side, accelerate and fall back. They stop to investigate, Jesse with his eyes and hands, Mister with his nose. Jesse keeps up his quiet chatter, a thread that loops and stretched between them.

- Mister, Mister, hey what have you found there? Come here, here Mister, what’s this stick? You won’t find a better one, I bet. Fetch! Go on! Let’s play? I’ll have to teach you that game, won’t I? They roam for hours, pulling leaves and slender twigs through hands, nudging the damp blunt cup of a mushroom into a fallen branches, pressing the robust and prickly cases of old beech nuts, trying to squash them shut between finger and thumb; following the trail of a squirrel, a rabbit, a deer, alarmingly another dog. They roam until the sound of a radio, tuned to pop music, quite close, stops them. Jesse is suddenly aware of the crunch of leaves under their feet. He is aware of himself in the space, his defined edges, when moments before he was a part of all that was around him. The possibility of another human re-forms his boundaries.

Mister isn’t interested in the new sound. He is chasing his loops and circles, designed for his pleasure by other creatures, eyes down, snuffling at the base of a tree then on into a clump of holly. Jesse moves back onto a path that is clearer of leaves, damp earth softening foot fall. He moves closer to look. It is the back of some houses on the edge of Little Denton. Jesse peers, confused by what he sees. There are tree stumps, recently felled, blonde and raw. There are pieces of living room furniture, two sofas and armchairs, outside in the trees. The back fence of one of the houses has gone, the big glass back doors of the house open out straight into the woods. There are flags hanging from upstairs windows, and one big one strung up between two trees. He takes a while to make out the writing because it is in a funny spiky script. And it is back to front. But he can see through the fabric, eventually making out the red cross and black letters that say Sons of Boudicca.

- Get that shit music off! Shouts a voice from inside the house. A head rises into view, from one of the sofas that faces away from Jesse towards the house. He checks over his shoulder, Mister is still happily sniffling around some logs. The man who gets up is dressed like a school teacher on the telly Jesse thinks. He has a shirt with a jumper over it, neat hair. He has a black gun in his hand, hanging loosely at his side. He leaves it there, pointing down his leg as he leans over a small table and fiddles with the radio, changing to some classical music. Jesse is frozen in a moment of terror. He imagines inevitably, that the man will turn slowly and point the gun at him. The crystal vision evaporates, he backs away, his heart hammering. His mind is scrambled and he feels the cold drag of shock across his skin. He walks back the way he has come, holding out a hand, a clicking finger to Mister, too scared to speak to him. The map of Jesse’s world shrinks.

some of your kind

would make your ways as dull and safe as ours

some would rip out your very hearts

Jesse pushes the encounter aside. He half fears being told off for straying into a place he was told to avoid. He guesses that he won’t be believed and any way it would be his fault. And so he turns away, or tries too. But it nags at him and is kept alive by the intuition of change, disquiet in the village. He feels insecure.

5 x hand-printed cards, plus the paperback edition, ebook and your name in the super patron list in the front of the book. 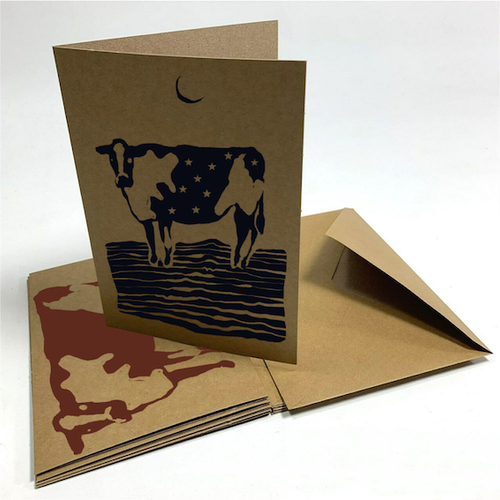 Paperback edition, plus the ebook edition and your name in the supporter list at the back of the book
Choose this reward
View all 14 rewards