A major new critical study of the writings of a giant of the SF genre by a Hugo award-winning critic and historian.

KMM: Two full-length studies on Heinlein's work were written during his lifetime, by Panshin and Franklin. Since he died there has been Patterson's two-volume biography, and there are a lot of scholarly and fan articles. Clearly, you've read them all! Why do we need another book on Heinlein?

FJM: To start with, of the books out there on Heinlein, only two were written after Heinlein’s last novel: Leon Stover’s 1987 book and Sanders and Clareson’s The Heritage of Heinlein (2014). Stover offers a close reading but imposes his own political views on Heinlein in an attempt to render him consistent. Sanders and Clareson produce a very solid, very linear account which for reasons of space spends little time on the short stories, and which hews rigorously to what I would describe as the popular narrative of Heinlein – one which is not wrong, but which is un-nuanced. This divides his life into the three periods, of short stories, juveniles and adult novels, but in reality these overlap. It also means that there isn’t much sense of how they all connect. Once you’ve read For Us, the Living, Heinlein’s work unfolds as one long conversation and argument with the ideas in that book, and a continual revisiting of the ideas of his younger self. Frequently Heinlein uses different books to take different sides of the argument. An awful lot of people have only read some Heinlein, and I sympathise because there is an awful lot. But when you read it all and when you start to think about how the short stories and novels and essays interact, a very complex writer emerges.

KMM: Heinlein is a hero to and an influence on the 'right' of the SF field. I remember many years ago being surprised to hear you being enthusiastic about Heinlein, and I probably asked you something like this: As a feminist of the left, why do you find Heinlein so intriguing?

FJM: Heinlein has always been a hero to parts of the left as well, particularly to the anarcho-left of which I am, loosely, a part both as a feminist and because I’m a Quaker (Quakers invented anarchist decision practice, and it's interesting that anti-pacifist Heinlein has a soft spot for them). But to return to the question: at the age of 12-20 it was because he was pretty much the only male sf writer writing women who had jobs, adventures, access to engineering jobs, and who got to be spies and ornery grandmas, and be liked by men who weren’t as smart as they. Believe me, when you are a smart girl in school, that’s pretty reassuring. In my late teens and twenties I started to get annoyed with the requirement to be “sexy” but attracted to the arguments about consent; frustrated with the performativity of the romances, and irritated by everyone wanting babies but attracted to the arguments about the different ways to construct families. This time round I’ve been fascinated by the way it's clear that Heinlein knows what his women are up against; I’ve ended up with very different readings of Podkayne, Friday and Maureen (To Sail Beyond the Sunset) in which all three of them become resisters of other people’s narrative of them. Podkayne fails, but it wasn’t very easy to envisage what success might have looked like. Friday succeeds and eventually heals from the damage a lifetime’s abuse has inflicted. Maureen, who when I read in 1987 I thought was just awful and a terrible conclusion to Heinlein’s pattern of strong women, I now recognize much more clearly in my memories of my grandma who fought the fights she could with the tools she had. I also have a picture of the plump pin up Hilda by Duane Bryners on my wall now. I am pretty convinced from the in-text descriptions that it’s the model for Maureen. 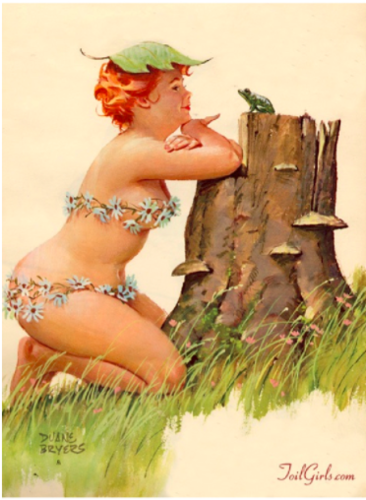 KMM: Unlike the other two of the big three, Asimov and Clarke, Heinlein figured as a public intellectual primarily through his fiction. Was this a choice, or did he simply try, and fail, to influence people through non-fiction?

FJM: It is true that his most direct attempt to influence people, his campaign “Who are the Heirs of Patrick Henry?” which railed against those who supported the inspection treaty was a total misfire and that this put him off direction action. But Heinlein couldn’t talk about some of what he believed in public. You got a certain pass for fiction and even then, people would eye you with suspicion (to go back to question one, almost every critic before Stover betrays their own obsession with sexual obsession by imposing it on Heinlein without ever considering what he could and couldn’t get away with pre 1960). But his essay “This I believe” is astonishingly moving in its arguments about neighborliness, and one of his most influential actions was to bring blood drives to science fiction conventions, a tradition that San Diego Comicon and others continue.

KMM: On re-reading Heinlein, did anything surprise you or jump out at you that you'd missed on earlier readings?

FJM: An awful lot, but I think top of the list is that the captain of Matt Dodson’s first space ship is Black. Heinlein rarely describes colour in the juveniles. Lots of us realize Caroline in Tunnel in the Sky is Zulu, and that by inference (everyone assumes he will date her, he looks like her little brother) so is Rod. But in Space Cadet Heinlein uses racialised and racist hints and I have to be honest, before the appalling caricatures that came out around Barack Obama’s presidency, I don’t think I would have caught them all because when I was growing up not all American stereotypes were part of the British racist vocabulary. But there it is. “He was tall, wide-shouldered, and flat-hipped, and so handsome that he looked like a television star playing Patrol officer” but his choice of fruit, and his "broad wide grin” are dead giveaways. A Black man as heroic (and extremely competent) commander.

5. Redheads and cats – is there a connection?

There are many red heads: his first red head is Delilah in “Delilah and the Space Riggers” who is obviously Ginny, but once red heads appear, they appear regularly as Castor and Pollux in The Rolling Stones, as Vicky in Time for the Stars, Lapis Lazuli and Lorelei Lee Long and of course Lazarus and Maureen Smith. As someone on the ginger spectrum myself—you once described my hair as whisky coloured which I adore—his affection for redheads endears me to him and so too does his affection for cats which he seems to have also acquired from Ginny. So that’s the connection really: love my red hair, love my cats, as a condition of a happy marriage.

Yep, he was a dog person before Ginny. Anyway I'm going to pledge now.

As a pre-teen red headed stepchild, RAH gave me the slimmest of hopes that girls could pilot a space ship. So RAH still has a place in my heart. No matter how many times I threw the books against the wall because of some fug-headed idiocy.

Looking forward to reading your analysis, promise I won't throw your book against the wall.