Thank you so much for supporting this project. In a week and a half, you have contributed so generously, and we are now 40% funded, which is fantastic.

Here's a little update about how the book is progressing, and other #repealthe8th-related things:

1. If you're an Irish Times subscriber or picked up Monday's newspaper, you can read my column about the #Strike4Repeal campaign which is calling for women in Ireland to go on strike on March 8th, International Women's Day: http://www.irishtimes.com/opinion/una-mullally-why-the-abortion-strike-will-succeed-1.2955661

(March 8th is also my birthday, so bonus strike action that day.) 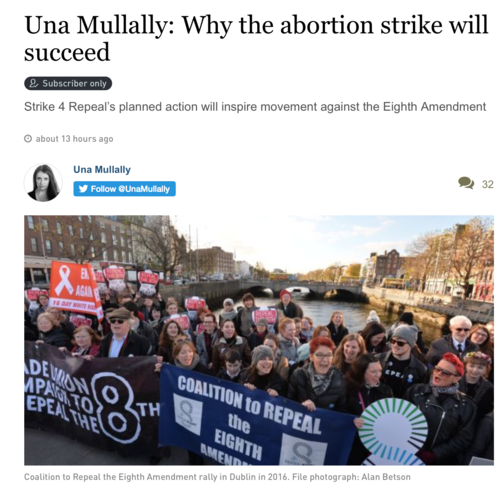 2. Tune into the Irish Times Women's Podcast later this week, where I'll be talking about that column, #Strike4Repeal, and the power of creative protest.

3. I've been speaking to some amazing artists, poets, screenwriters, short story authors and novelists over the last week or so who have come on board and will be included in this upcoming anthology. These people are all amazing, so I'm really excited to share who they are and what they'll be writing (when I'm allowed!) as the production of the anthology progresses.

4. Do you have any thoughts for what kind of writing you'd like to read in the anthology? Hit me up on Twitter @UnaMullally

5. And now: a favour. Your donation to this anthology is hugely appreciated. Remember, 50% of my profits go back into the Coalition to Repeal the Eighth Amendment. But I have a favour to ask. Do you know someone who you think would be interested in funding this book? A pal or a family member or a colleague? If you could send a link to this crowdfunding campaign to three people this week and expand the reach of the project that would be amazing.

Thank you all so much!

is it the norm for editors to get 50% of profits?

A first edition of the paperback plus the ebook.