I am finding new pieces all the time, lurking in some off file where they shouldn't be...this is one such example...
Here’s a sample : 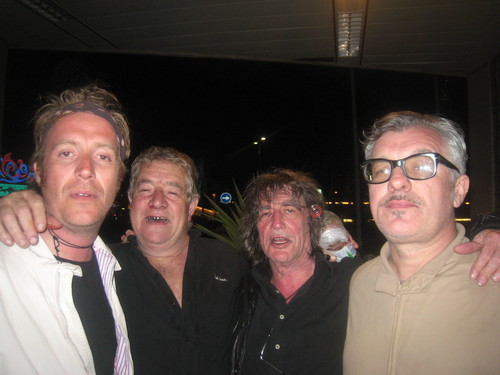 The above photo taken at 5am after a 24 hour session shows Rhys in fine fettle, Charlie Breaker ex-gangster, bare-knuckle boxer and purveyor of parts, Howard Marks and yours truly.....

Howard Marks and Rhys Ifans in Alicante on the set of Mr. Nice

Before I travelled to Alicante with Howard Marks to visit the set of Mr. Nice – the screen adaptation of his best selling memoirs, Rhys Ifans, who stars in the picture as Marks, called me and said, “When Chloe Sevigny [who plays Judy Marks] came to the UK, the customs officers opened her case and found a copy of Howard’s book, Mr. Nice, the script and a work visa. So, they asked what was the name of the film she was about to act in and she said Mr. Nice.
“But that’s Howard Marks?” they boomed. ‘We don’t like him at all.’ They then went through her belongings – most enthusiastically – for about an hour.”

And yet, even though I was about to travel to Alicante, to visit the set of Mr. Nice with the man himself, Howard Marks, to see our mutual friend Rhys Ifans play him in the movie, and would inevitably accompany him through customs, it wasn’t a trip that even the least impetuous mump would ever consider turning down.

Of course, the reason for U.K. Customs officers extreme suspicion regarding Mr. Marks is that his best selling memoirs, Mr. Nice, tracks his life from his beginnings in Kenfig Hill, South Wales, to Oxford (where he’d received a scholarship to Balliol to study physics) and onto his rise to become one of the world’s biggest smugglers of grade ‘A’ cannabis. He regularly exported consignments of 30 tons of hashish to America. At his height, the nimble Welsh man employed some forty-three aliases (his favourite being Mr. Nice hence the books title), eighty-nine phone lines and twenty-five companies that laundered the vast amount of readies that swelled his coffers to bursting.

Yet curiously, no one stopped us at the airport and all went swimmingly until, after our set visit, we discovered that Ifans had the next two days off and we were at his mercy.
“Come on boys,” he declared. “I’m off till Thursday so let’s go and fucking HAVE IT!”

That night, after Ifans had treated a gang of 12 to dinner at Alicante’s finest restaurant, tipped hugely and was on first name terms with all of the staff and most of its patrons, it was off around the bars. We of course ended back in his hotel room where we helped him go through his lines until about 8 in the morning at which point he stood and declared it a wrap. A few hours later, my phone rang. It was Rhys. It was 10.30 am.
“Come on Sullivan we’re in the bar waiting for you,” he roared. “There’s a beer with your name on it.” And so there was I, after a mere one hours kip, sitting in a bar overlooking the harbour conducting what some extremely generous souls might describe as an interview.

CS: You told me earlier that the film is not a cautionary tale.

RI: I read the script in varying states and potency and, as it’s turned out, it’s not just a celebration of mischief but also the biography of a pirate.

RI: What I was saying was that it was a celebration of mischief but now with 3 days to go on the shoot I discover that it is a cautionary tale.

HM: With only 3 days to go on the shoot I thought it was a cautionary tale but, now discover...

HM: Of course, it IS a celebration of mischief. As far as I’m concerned, I hope it will give people the confidence to do whatever they like no matter what the fuck their parents think or what the law says. It’s more important to do what you want inside.

RI: And let that be a lesson to you all.

CS: Rhys it must’ve been a tough role to play, as Howard is your old mate.

RI: On paper, when you’re an actor you will never want the person you are playing to be around. But, this has been extraordinary, because Howard is a friend and I’d never played the leading man before, you know the super hero. I haven’t really done that. So for all those reasons, it has been the most complete acting experience I have ever had because it’s been constant. In my every waking moment I’ve been Howard.

CS: How important was it that Rhys played you?

HM: I had no interest in any proposal unless they had Rhys playing me. I went on the record several times saying that if the movie happened he has to play me and under any conditions whatsoever.

CS: Where did you meet?

HM: 13 years ago in Pontypridd Town Hall. I had started writing it but I hadn’t finished it.

CS: And then it went to number one on the best sellers list.

HM: Aye and I sold it for a song. I’d just come out of nick and was grabbing for whatever money I could get.

CS: How is it seeing your old pal playing you on set?

HM: The weird thing is that it’s not weird. I feel that when someone is playing you, and is younger and better looking, I feel as if I’ve cheated mortality for a little bit longer.

CS: Rhys you said that some of the scenes were quite tough to do, such as the scene when Howard is having his teeth pulled out.

RI: On paper, when you’re an actor, you will never want the person you are playing to be around.  But what I discovered about the harrowing bits was, that he actually did it, and what it cost Howard and it was really, really, really intense and, it wasn’t because of the subject and narrative, it was coupled with the fact that I was assimilating an emotional place where my friend was before I knew him. I’m glad to be wearing sunglasses at this moment now so you can’t see me cry.

RI: Yes, but I don’t want to talk about all that in front of Howard as I got a paid a lot of money going to those very hard places for a very short time.

HM: I got paid a lot of money to go to those very hard places and for a very long time.

HM: I couldn’t go on about the hard times for too long in the book, as no one would have bought it. Too depressing.

RI: The hard times blind-side you – they come from behind.

Howard and I burst into laughter. We almost fall off our chairs. Rhys drags on his Benson and looks at us disparagingly.

RI: Aaaaah! For fuck’s sake lads. I’m trying to be serious. I’m trying to be really honest with Howard here and, I might sound like a wanker, but this is my experience playing this film. I will never get a role like this again. So I’m going to say it never mind you fucking pair. Playing a man like Howard – who I love from the bottom of my heart – is an extraordinary thing. We need our heroes, we need to preserve our heroes that have been ignored in the past and we all know who they are. So hopefully I have done Howard a huge service…and all I can say we are both great in the sack.

HM: But we’ve never shagged the same person, so we don’t know… well not to my knowledge.

CS: How was it being on set and seeing someone play your mum.

HM: Well now that was odd because I fancied her. The bloke who played my father I was comfortable with but I wanted to shag the woman who played my mother. And I don’t know anyone else who has had that experience. Sitting next to an actress who is playing your mother and wanting to shag her. No, but you will. But, it’s not a secret. I liked her a lot.

RI: I told her you liked her after I shagged her.

CS: You said you did?

HM: Well, it wasn’t nine exactly but, we thought it was a better number than ten. It was certainly between 5 and 15 minutes.  But nine gives the impression of being accurate and a bit together.

CS: When is the film coming out?

RI: No idea. But, if Bernard the director’s editing is anything like his filmmaking it will be in your local cinema Monday afternoon.