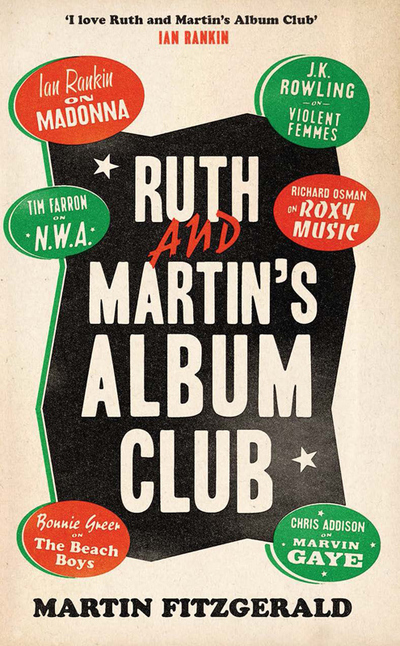 Firstly, a HUGE thanks to our friends Neil and John for making that promotional video and allowing their heads to float around in a jukebox like that.

Now on to the serious business.

What on earth is Ruth and Martin Album's Album Club when it's at home?

In December 2014, Ruth and I took our dogs for a walk and she came up with an idea.

It was really simple – we would make people listen to a great album they’ve never heard before, at least 3 times, and then ask them to review it.

It was the best idea Ruth ever had and, because she's not stupid, she then decided I was going to do all the work whilst she mostly drank gin and listened to Bruce Springsteen.

So I went home and, about 23 minutes later, we had an online blog which we imaginatively called Ruth and Martin's Album Club. We then started to get some guests, and the requisite social media accounts you need these days, and the whole thing became quite popular. Adam Buxton, Tracey Thorn, Ian Rankin, Martin Carr, Stewart Lee, Bonnie Greer, and Nigel Blackwell from Half Man Half Biscuit were just some of the people that allowed us to force albums on them.

Each edition follows the same format -

1) An introduction to the album written by yours truly.

2) The guest's explanation of why they've never bothered with the album.

3) The guest's review after we made them listen to it 3 times.

The book version of this thing will be a compilation of some of our greatest hits (we haven't decided which ones yet) and a few exclusive new ones that have never appeared anywhere before.

Finally, here's some nice things that we made people say about us -

“I grew bored of music criticism a long time ago because the writer has been taken out of it and most read like glorified artist biogs. Ruth and Martin's Album Club works on a more personal, human level and has become my favourite music website" -  Martin Carr, Pop Star.

"I love Ruth and Martin's Album Club. Classic albums (and oddities) given a fresh hearing, and Martin's capsule reviews remain the best in the business. The man knows his stuff - heck, he even found an album *I'd* never heard" -  Ian Rankin, Author

“Have you discovered Ruth and Martin’s Album Club yet? It’s just brilliantly written, now want to listen to all the great music" -  Dara O’Briain, Comedian.

"Ruth and Martin's Album Club is like a much better, reverse version of the Britannia Music Club - just one person gets the album against their will, but it's everyone who ends up buying it. Persuasive and essential." -  Liz Buckley, Record Company Big Wig.

"Music geek paradise. Like the chat you have in the pub after the gig, with the shamanistic roadie who has seen it all. But, unlike that guy, these guys care what YOU think, and don't nick all your fags." - Hugo Rifkind, Journalist.

"If it hadn't been for Ruth and Martin's Album Club, I'd never have known quite how much I dislike the music of Joni Mitchell." - Euan McColm, Journalist and previous guest