Radical Shakespeare: Why do we get him so wrong?

A timely study which restores the revolutionary message of Shakespeare's art.

One of the most dramatically effective tragedies in world drama.

I explore how Shakespeare's supreme dramatic power works its magic in the famous Temptation scenes in my book.
Meanwhile:

The first recorded performance of Othello, the Moor of Venice, was on Hallowmas Day, November 1, 1604

This, considered one of the most dramatically effective tragedies in world drama, begins with a small-minded, middle-aged, disgruntled soldier giving vent to petty grievances against his boss because he’s been passed over for promotion – the job’s gone to a totally inexperienced young ‘foreigner’ – he’s

From FLORENCE, I TELL YOU! THIS IS VENICE - a college boy, who’s never set foot on a battlefield, and learned what little he knows of the art of war from a textbook.

Iago, who has a pretty filthy way with words, has been in the army all his life, joined up straight from school, and was expecting his General to make him lieutenant – a fit reward for all his years of military service.

So this tragedy starts quite unlike Shakespeare’s other major tragedies, with the personal concerns of a purely personal rancour. In Macbeth, Hamlet and King Lear, it's issues of state and indeed the forces of the universe that are suggested in the opening lines. Othello begins within the microcosmic framework of a small mind – what is being discussed is given no further significance by the speaker than its effects on his own private preoccupations.

It’s not a very promising start for high tragedy, is it? And what of the rest of the play? A young Venetian noblewoman has eloped with the General, which causes her father to die with grief.

Iago drives Othello into insane jealousy by convincing him that his new bride is having an affair with the new lieutenant - ‘Making the beast with two backs,’ he tells the woman’s father:

Is topping your white ewe.’

The proof Iago comes up with is a handkerchief Othello had given his wife as a precious love token. But the psychological strategy by which he does so is what lies at the tragic heart of this play.

Literary critics in the past have had a lot of fun mocking the play:

‘Why was not this call’d “The Tragedy of the Handkerchief?”’ said one critic. ‘Had it been Desdemona’s garter, the Sagacious Moor might have smelled a Rat; but the handkerchief is so remote a trifle, no Booby this side of Mauritania could make any consequence from it’. And he went on to deny that it was a tragedy at all.

‘There is in this play some burlesque, some humour and ramble of comical wit; some show and some mimicry to divert the spectators, but the tragical part is plainly none other than a Bloody Farce without salt or savour.’

Ah, the blindness of those who fail to even try to understand how Shakespeare makes meaning on his stage. 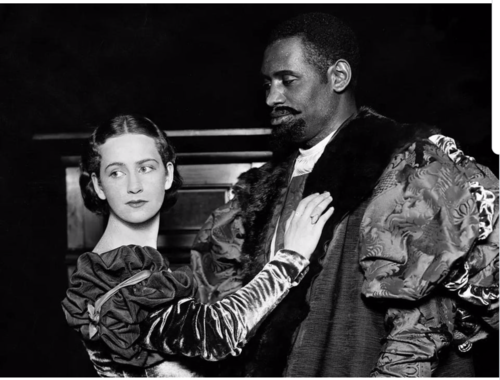 Paul Robeson and Peggy Ashcroft at the Savoy theatre in London in 1930.

So how to explain the raging success of the play down the centuries. It was a COLOSSAL hit when it was performed over 400 years ago. In one eulogy of the dramatist written at the time recorded how popular the play was:

So have I seene, when Cesar would appeare,

And on the Stage at halfe-sword parley were,

Brutus and Cassius: oh how the Audience

Were ravish'd, with what wonder they went thence;

When some new day they would not brooke a line,

Honest Iago, or the jealous Moore.

Of course, it’s not really to do with a hankie. It’s how an individual can utterly destroy a person’s life making your victim believe he is an outsider.

Those Temptation scenes really are terrifying, Shakespeare's pysychological understanding of what it is to be human shows him at the height of this magical power.

Pauline is sharing truly wonderful insights. This invitation to deepen our sense of meaning in Shakespeare is surely not to be missed. Hope we can get a read of it soon.

Shakespeare and Cocktails on the Rooftop

Join Pauline on the rooftop bar of The Hilton by the Tower of London for a cocktail and an intimate informal chat about Shakespeare's London and the Tower.
One cocktail included.
LIMITED TO 4.