The hidden queer history of myth & folklore; it’s time to drag those monsters out of the closet!

Perhaps the most direct and powerful example of a mermaid being used by a queer person to communicate something about their life is that of Hans Christian Anderson. Hans may be most well-known for his children’s stories and fairytales, but within his diaries and letters we get a much fuller picture of the man. Hans was a tortured and emotional soul, pouring his heart into everything he wrote and into every person he met. Yet despite his fervor, it seems none of these romantic advances were ever reciprocated. In his diaries, Hans writes with surprising candor about his desire for sex and intimacy, even including symbols and codes which many believe related to masturbation. Hans was also a biromantic man, falling head over heels in love with many men and women throughout his life.

One clear example was his affection for the handsome young Edvard Collin. The two communicated frequently through letters, and the surviving letters from Hans leave no secrets about the extent of his affection. ”I long for you as though you were a beautiful Calabrian girl.” Calabria being a part of Italy famous amongst European men for its beautiful women. Being besotted with Edvard, it is clear from Hans’s diaries that when Edvard decides to marry a woman, he is heartbroken. After the nuptials, Hans seems to fall into a depression, and it is here when isolating himself on the island of Fyn, he wrote the first treatment of the story that would become The Little Mermaid.

The original account of The Little Mermaid is quite far from the version created by Disney 150 years later. In Hans’ story, the nameless mermaid must have her tongue cut out with scissors by the sea witch. It’s much more bloody and gruesome than Ariel’s experience and significantly less family friendly. When she comes onto land with her new legs, every step the mermaid takes with her feet is like walking on broken glass. To make matters worse, the mermaid does not get her prince in the end, instead she sacrifices herself for his happiness. And as a final downer, mermaids do not have souls in Hans’s story. When she dies, she is turned into seafoam, with only the dangling promise that one day she might earn her place in heaven.

The writing of this tragic tale, of a half-formed creature, whose voice is taken and who is doomed to be unloved, is a clear response to Hans’s own grief and turmoil over Edvard. It seems Hans never got the men or women he longed for, so neither does the little mermaid.

Seeing the original The Little Mermaid as more than just a children’s story, but as an allegory for a queer man’s unreceiprocated love puts the whole tale into a new light. It is powerful, and no coincidence, that Hans chose the mermaid as a symbol to represent his own painful and repressed emotions. When Hans wrote ‘But a mermaid has no tears, and therefore she suffers so much more.’ there is a poignantly personal tone, one of someone who, like the half fish protagonist, cannot express their heartbreak. In many ways The Little Mermaid is not just a fairytale, but it is the most tragic love letter never sent. 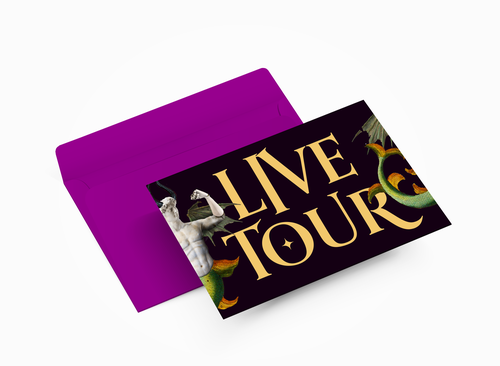 Pre-order this reward
View all 12 rewards