Three Readings and a Festival

Last weekend, in an exciting milestone, I made my first appearance officially as an author. As part of the Margate Bookie festival, the Unbound gang were holding a Pledge Party, and invited me to speak about Purple People.  This was, for me, a ridiculously exciting - not to mention terrifying - prospect.  And thinking about it this week, it wasn’t actually the first time I’d read my work for a crowd.  So, following an illustrious history of things that come in threes - Wise Men, Bananarama (sometimes), discounted shampoos in Boots - here’s my trio of titchy tales:

1. Approximately 1982.  A young, pig-tailed me spends many hours with a stacking coloured pencil, creating handwritten, illustrated ‘books’ at my grandparents’ coffee table, the pages bound together with staples (my writerly endeavours sustained by orange squash and Terry’s Neopolitan chocolates).  A kindly junior school teacher suggested I read one of my stories in a morning assembly - not an offer that tended to be extended to us little ‘uns, but I took it.  Thus I got to regale the whole school with a tale about talking trees (I don’t remember much about that story, but it seems my path to the fantastical may have started early).

Incidentally, I was reminded of this a couple of days ago, via an interview with the lovely (and bestselling!) Kate Hamer, who declared that her first books were similarly stapled.

2. Shuttling forward to 2012.  At work, myself and colleague Jeremy Keith* were beavering away preparing then-annual conference dConstruct**.  Jeremy, who is an extremely knowledgable and enthusiastic appreciator of speculative fiction, had assembled a stellar line up of speakers, including author Lauren Beukes.  Having Lauren in town, he mused, was a swell chance to celebrate sci-fi, and so Brighton SF was (briefly) borne; a one-off event, for which he nabbed the immensely grand line-up of Lauren, Jeff Noon and legendary, trailblazing Brian Aldiss (whose human presence, as you may well have heard, was sadly lost to the world this week).

Jeremy insisted this would be an excellent opportunity for me to read an excerpt from Purple People, and so invited me onto the stage with those illustrious, wordy wizards to share an early indigo excerpt.  I was quite literally shaking that night (even more than a talking tree, ho ho), but all was jolly.  I read my piece without falling off the stage, and afterwards, folk made some ace and encouraging comments.

Incidentally (2), you can listen to a podcast of the whole event here. 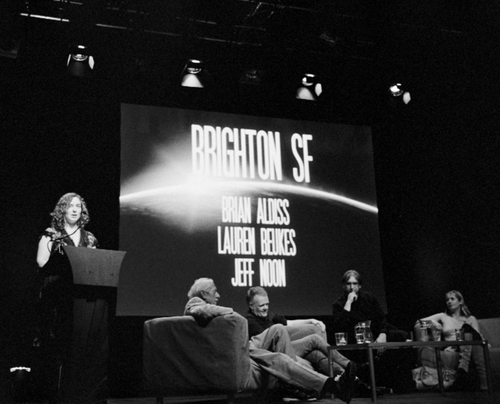 3. Here we are, five years later, in 2017.  Purple People is finished (albeit, mid-edit), has found a home, and is doing a pledge-rustling tap dance, hoping to find its way into print and onto bookshelves.  I’m in Margate, in a room with a view of the sea, sat alongside fellow Unbound authors, who are sharing a brilliant pot pourri of projects.  One of these is the that-day flamingo-shirted David Quantick (who every day is an Emmy Award-winning legend in anyone’s lunchtime).  Mr Quantick a) recently taught a stupendous Arvon TV Comedy writing course which I had the good fortune to take, and b) has a supremely super (second!) novel, Go West, available for your pledging pleasure. 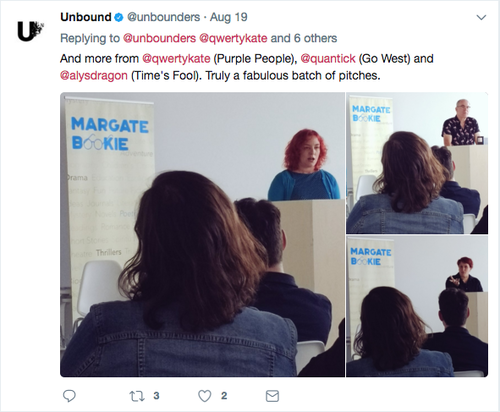 But I digress.  Eventually it’s my turn, and I hop up to the lectern to regale the audience with my merry book bait.  It’s a dandy dystopia which features: an episode of Question Time dedicated to the Purple scheme!  A national rally against the Purpleness!  A conspiracy theorist who was in a Def Leppard tribute band!  And that mysterious man wearing double-bluffingly bland beige trousers...  Who could resist?

Despite the nerve-jangling anticipation of such a thing, all went well; it was a complete treat to meet a handful of other Unbounders, and to have had the chance to gab about Purple People in person.

Incidentally (3), I read a short, tabloid-tastic excerpt, too... and it might be fun to share one of those with you shortly.  Watch this space!

In another milestone,  Purple People now has over 100 backers, which is amazing, and very much appreciated.  Thank you!

And finally, the Unbound gang have a 10% discount code available for all pledges this Bank Holiday weekend (25th-28th August).  So if you fancy supporting another Unbound title, or know anyone who could use a nudge for supporting Purple People, just use ‘BANK 10’ to get a dandy discount. 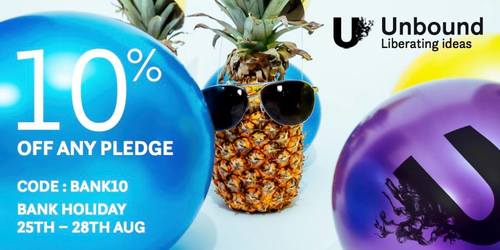 * Amongst other greater achievements, Jeremy wrote one of my favourite blog posts of all time.

** dConstruct ran for ten years, and was a day of brain-boggling brilliant talks, covering all manner of creative, philosophical, scientific and truly thought-provoking subjects.  Luckily for everyone, there’s an online archive, where you can listen to every one of them.  You should - they’re fantastic.