Greetings, Purple pals. I hope this finds you all well and dandy.

Firstly, in truly exciting news, Purple People is, as I write, already 48% funded - in just under three weeks!  Thank you so much for your pledges, which are very greatly appreciated.

Last week a portion of my family bobbed to Brighton on a day trip; my cousin, Sara, and her excellent offspring, Emily and Steven (I'd like to note that Emily, too, is a writer), plus my Mum and her ridiculously adorable and titchy dachshund, Daphne (honestly, you'd think my Mum was gadding about with Brad Pitt, given the amount of times she and Daphers get stopped in the street). Emily was telling us about the books she'll be studying for her English GCSE, and one of them is - as it was back when I was at school - Victory Gin-dunked classic, '1984'.

Now, there's obviously much that could be said, and is already being said, about the uncanny relevance of many dystopian tales right now - and maybe my tuppence worth is something for another post (plus incidentally, if you haven't already watched the new adaptation of 'The Handmaid's Tale', it's incredible).  But remembering the teenage joy of discovering something so startling and mind-bending made me think I'd share a few lines about formative influences.

So.  Herewith three pivotal reading moments I remember from my school days, which I think say everything about how I write now, and particularly explain the birth of Purple People:

1) In English class one day we were given photocopies of Jonathan Swift's 'A Modest Proposal'.  I can picture that moment; the classroom, the desk, the stapled pages being handed to me.  As I started to read it, I was horrified.  How awful.  And gruesome.  But then the satirical penny dropped, and lodged somewhere, very firmly, in my 'Just 17' and Top of the Pops-addled brain (this newfound appreciation of satire was no doubt later compounded by Spitting Image).

2) Having read '1984', I bought a copy of 'Animal Farm' (probably my Mum encouraged this; she's very wise when it comes to books, encouraging young me to read less-stumbled-upon stories, such as original gothic novel, 'The Castle of Otranto').  Again, I can clearly picture the Sunday I spent lying in bed reading that, agog at it's brilliance, and later going into the kitchen to tell my Mum how brain-popping it was*.  What a genius, that George, with his dystopias. (*tangent ahoy: that's just reminded me of the scene in 'Educating Rita', when Julie Walters rushes from work - a client still under the hairdryer - to tell lecturer Michael Caine about her first experience of seeing a Shakespeare play, in this case, 'Macbeth'.  Breathless, she exclaims: 'Wasn't his wife a cow?").

3) Anyone who knows me will see this coming, but... If part of my teenage self was typically, passionately, wannabe-political, then another part was similarly frivolous: all Rimmel make-up and pop magazines.  But the impact of the tremendous, inclusive, imaginative, inventive, own-lingo-conjuring, dazzling witfest that was Smash Hits cannot be underestimated.  Those of you old enough to remember it (the proper version, that is, not the horrifying mutant of itself it became in the 90s) may believe this to be an entirely daft claim, but truly, I could have eaten every brilliant word.  Straight-laced, non-Motorhead fancying me had to read interviews with Lemmy, say, because I knew I'd be missing out on magnificent, chortle-inducing wordsmithery if I didn't (and if you're not convinced, lest you find yourself having tea round mine any time, I'll dig out my archive of Ver Hits for you to peruse).  Plus, they shoe-horned in many a subtle (or not-so-subtle) political comment.  And as to one particular pivotal moment: there was an issue in which even the half page breadcrumb advising what was to be in the next issue was a work of sheer comedic genius.  I could recite it to you now, verbatim (but don't worry, I won't).  Possibly one of the best pages ever printed (and final tangent for this post: if you have any interest in music journalism, magazine publishing, celebrity culture of the last few decades, excellent rock anecdotes, or just massively enjoyable writing, then you must read Sylvia Patterson's memoir, 'I'm Not With the Band').

Anyway.  Two final notes:  In modern Purple People news, I'm currently in the thick of a big edit, knocking it into shinier, more satirical, shape, and whittling down the word count.  Astonishing, isn't it, that something I write would be overlong...

And with it being just a tipsy whisker away from 50% funded, if you might be happy to share the Purple People page with friends, family, pets, passing pigeons - and perhaps send to any particular book lovers - that would be spectacularly kind of you.  Thank you (thank you!). 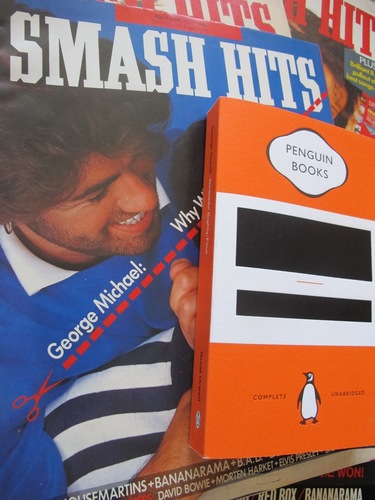