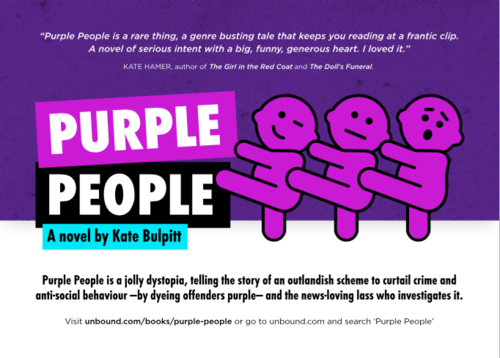 I'd guess we've all fallen for them; they're striking, appealing, sometimes irresistible.  They're supposed to say so much, and often they do.  Most probably, as you're being charmed by one, you'll be tickled by that ever-ripe idiom, 'You can't judge a book by its cover'.  Which may be true, of course, but that cover can certainly reel you in.

This week I've been pretty awestruck by the Purple People postcards rustled up by my friend James.  He's always been exceedingly kind and helpful with image-conjuring endeavours (including elfy Christmas card production, party invitations, and the cover of The Book of Unwritten Rules short story anthology).  Following my own attempt to design the postcards - in my mind, involving eye-catching, retro Jelly Baby-esque purple people, with a nod to tabloid news; in reality, a lacklustre Word document with too much text (there's a surprise!) - I sheepishly requested his assistance.  Well, I say assistance - I described what I'd failed to produce, and he came up with at least a dozen brilliant options, including the adorable and arresting little lilac folk.

We had a ponder on the lavender lads 'n' lasses expressions.  Initially they were happy, which seemed rather incongruous for folk who've been Purpled, but they did need to look appealing.  So, a more damson selection of Snow White's dwarves, James sent Happy, Cheeky, Sad, Frustrated and Surprised.  Like the nail-biting last round of a telly talent contest, selections were made, and Cheeky, Surprised and Uncertain made it through to the final.

What's great about the design, in my opinion, is that it's bold and colourful, with a sense of fun, and mischief.  Hopefully it inspires curiosity, too: what's up with these wee folk and their mixed expressions?  What does it mean?

I've been swooning over the postcards - there are a couple of variations, and I just love them.  But trying to create such an image is also a (tiny) example of the crazy and precise alchemy involved in designing a book cover (not to mention it surely being the source of acute palpitations for publishers, designers and authors).

I'm a sucker for a great jacket - and on a couple of occasions I've bought a second copy of a book I already own, due to a new, and irresistible, cover.  Most notably this, which may be one of my all-time favourites (a 'redacted' 1984): 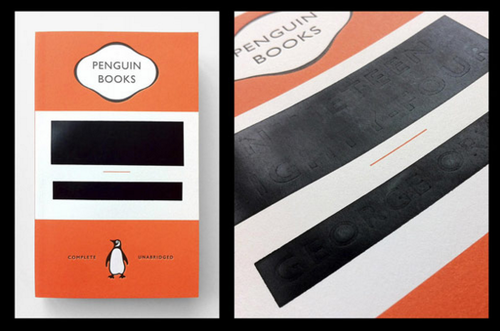 And I've got a couple of books I'll get to who-knows-when, just because their jackets are beautiful.

Incidentally, writing this has reminded me of a quote in one of BBC4's excellent music documentaries.  'The LP collection was the art collection of the ordinary man' (a faded post it note attributes this to Tony Parsons).

Anyway... book art wittering aside, Purple People is now *so* close to the finish line.  There's a little over £900 to raise (with - amazingly - nearly four times that already pledged), and I'm keeping all things crossed that maybe a Christmas miracle will help it towards 100% funded.  If you know anyone who might like to support this jolly dystopia (or might enjoy a pledge on their behalf as a festive present!*), they can get £5 off any pledge of £20 or more - they'll just need to use the discount code 'purple5'.

* If anyone does fancy giving Purple People as a Christmas gift, drop me a line and I can send a hand-made, handwritten thank you card (with one of the lovely postcards!) for the recipient as something you can hand over as an appreciative 'merci' in advance of the book hitting the printing presses!