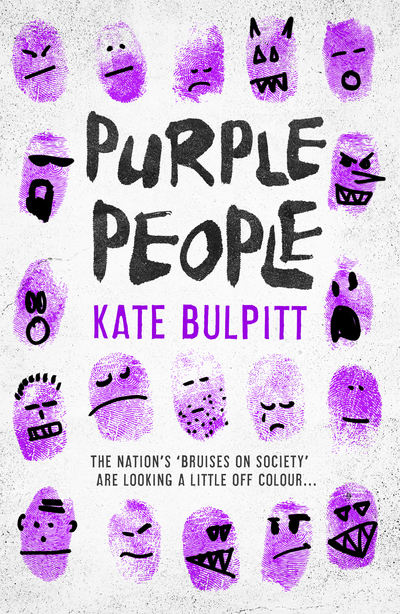 Politics
You made Purple People a reality. It's available in all good book stores now.
$15
46 pledges

1st edition paperback, ebook edition and your name in the list of Super Patrons in the front of the book.
$60  + shipping
11 pledges

Tea with the author in Brighton including a box of special Purple People cupcakes (we've had them in the office and they're great!) and everything at the Super Patron Paperback level.
$75  + shipping
10 pledges

Your chance to have a character named after you or a nominated person plus everything at the Super Patron Paperback level.

Be a Lav in style with a limited edition tote bag containing foil-embossed pencils, a special card, an exclusive short story, plus a 1st edition paperback and your name in the back of the book.
$115  + shipping
3 pledges

5 copies of the 1st edition Super Patron paperback and the ebook edition and your name in the list of Super Patrons in the front of the book.
$150  + shipping
4 pledges

There’s a curiously coloured scheme afoot in Blighty. In an effort to tackle dispiriting, spiralling levels of crime and anti-social behaviour, the government has a new solution: to dye offenders purple. For once, even aspiring newsreader Eve Baxter is shocked - she’s spent ten years gathering the world’s weird, wild and wacky news at Big Apple-based agency, Say Fantastique!, but has never seen anything as loopy as this.

‘The good people of Great Britain have nothing to fear,’ announced Theo Fletcher, the young and zealous Prime Minister, before unveiling the improbable truth. Upon learning of this shamed tribe of ‘bruises on society’, the nation is agog, and surprisingly divided: there’s anger and agreement, protest and debate. Oh, green and pleasant and now purple land...

The newspapers are having a field day, chock full of colourful commentary and vox pops. Politicians of all shades are clamouring to declare themselves for or against. And the renationalised Police Force is hastily adapting to this unusual new approach to law and order. But most baffling is quite how the transformations in this extreme scheme occur - those who’ve experienced a change of shade are entirely flummoxed as to how it happened.

As the Purpleness starts, a brawl leaves Eve’s Dad in hospital. She returns to the UK to see him - albeit somewhat begrudgingly. In New York she has found an intoxicating sense of freedom from a hatful of laments. Most particularly her family, including her brother, Simon - a potential purple candidate if ever there was one. Eve also frets that she should have further chased her ambitions for a life in real news, her obsession since she was young. She becomes entirely transfixed by the purple developments and wonders - what if this could be her route back into that world?

Once in Blighty - despite technical advances, still a land of smoke-filled pubs and Roxy Music - Eve begins to investigate how the Turning has been occurring. Enlisting help from a beloved newsreader, a human rights campaigner (who happens to be an old flame), and a keen conspiracy theorist, Eve tries to unravel the riddle of the Purpleness. Which transpires to be more dangerous than she anticipated; potentially enlightening communication is intercepted before she receives it; she’s threatened in an alley by a man wearing double-bluffingly bland beige trousers, and she finds she’s on the brink of being Turned purple herself...

The Purpleness will have far-reaching consequences for Eve and those around her. Can she avoid the ‘skin of sin’ and crack this rum, plum story of a lifetime?

"‘Purple People is a rare thing, a genre busting tale that keeps you reading at a frantic clip. A novel of serious intent with a big, funny, generous heart. I loved it.’ KATE HAMER, bestselling author of The Girl in the Red Coat and The Doll's Funeral.

1st edition paperback, ebook edition and your name in the list of Super Patrons in the front of the book.
View all 9 rewards