Sorry for the radio silence. I’ve just handed in my final manuscript, and the preceding six weeks were a wild-eyed blur of grubby tracksuit bottoms and matted hair and pasta-and-butter. But it’s done now.

Here are the vital statistics:

A few people have asked when the thing’s going to be published. The date’s set for September, which I appreciate is a boringly long time, but there’s still a lot of work to be done before it becomes an actual book: copy edit, typesetting, cover design, press, etc. Some world class medical man is also going to give it the once-over to make sure all the mental health bits are responsible.

Ernest Hermingway said ‘the first draft of everything is shit’ and he was right. Though I didn’t realise just quite how shit my first draft was until I had the joy of working with my Unbound editor, Liz Garner. Before she came on board, the manuscript was turbo-shit, and she helped me turn it into something that I really love. The process gave me a new appreciation of editors’ wizardry: their sixth sense for patterns, shapes, repetitions, pace, tension – beats I couldn’t see even yet alone control. It was a wonderful experience.

Ironically, in writing a book about obsessive compulsive disorder, my obsessive tendencies went loco. My thinking was black and white. If I couldn’t write a superlatively brilliant book, then it must be terrible – absolutely, risibly, embarrassingly so. I once heard OCD described as a ‘catastrophic misinterpretation’ of intrusive thoughts – which is also apt to describe my totally melo-dro unpicking of editorial feedback:

Editor: I think it’s great.
Me: She thinks it’s awful.

But, rather fittingly – given the book’s central theme of accepting uncertainty and greyness – I finally handed the beast over, not knowing if really I’d nailed it, but feeling pretty pleased none-the-less.

Thank you again for all your pledges. Means the world. 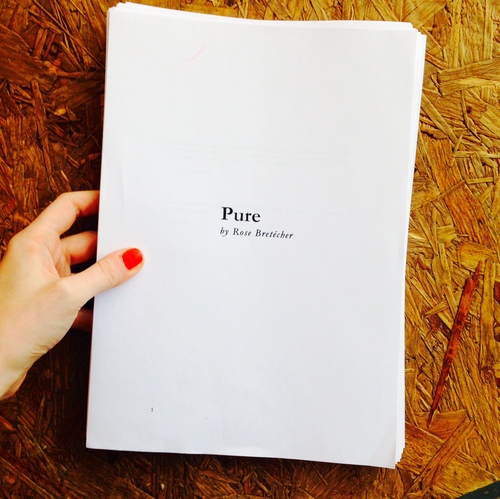 Pasta-and-butter is it these days, Rose? I remember you telling us all about the great pleasure we could could bring to our lives by investing in a pot of M&S chicken, mustard & honey pasta. Congratulations on finishing the book. This is a very exciting time for you. I'm looking forward to reading it.