100 quirky Meades original photos, in a box, for Christmas 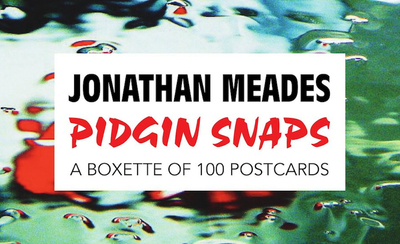 Non fiction
You made Pidgin Snaps – A Boxette a reality. It's available in all good book stores now.
$8
41 pledges

All the above + 2 tickets to the launch party at somewhere suitably Meadesian.

Everything up to party level + a ticket to lunch with Jonathan, with his own set menu and wines (central London - 20 places only)

PLEASE NOTE: Pidgin Snaps is now in production so your name can not be listed in the back of the box. However, you can pre-order a copy of the special Unbound Limited edition that will not be available in the shops.

Why?
Photographs are a way of making the seemingly banal fascinating and calling into question the very idea of banality. Perhaps banality doesn't exist.

At least you do so if your name is Brandt or Sternfeld or Witkin or Arbus.

Me, I just take Pidgin Snaps.

What?
It’s a box. A boxed set. A boxette. Containing 100 colour postcard-sized snaps of places with brief oblique texts about them on the back of the card. By me. For you to use (or abuse). Or give. Or keep.

If you like the idea, pledge at one of the levels opposite and we’ll aim to have a lovely, shiny boxette with you (or a loved one) in November.