Philosophers' Dogs in the news!

So we're just a couple of backers away from reaching the giddy heights of 60%! We couldn't have got this far without each and every one of you and it means the absolute world to have your support.

It seems our little project is also one that appeals to quite a few folk out in the ether, and we're extremely pleased to bring you this short update to let you know about some of the exciting coverage we've received in various outlets! (Not to mention a retweet from THE ACTUAL REAL LIFE NEIL GAIMAN HIMSELF...but that's another story...)

Hot off the presses

'Philosophers' Dogs' was featured in the August/September edition (Issue 11) of 'Edition Dog' - one of the UK's leading pet magazines for dog owners and enthusiasts. This is a print-only magazine.

Sam then had his own dose of local fame when he and 'Philosophers' Dogs' were featured in Southwark News - the only place to stay up to date with the news in one of the best boroughs in London. You can access a few digital copy of the news magazine here; and we've even added a screenshot of the 'Philosophers' Dogs' feature below, where the book takes pride of place alongside a news story about a man climbing a mountain. 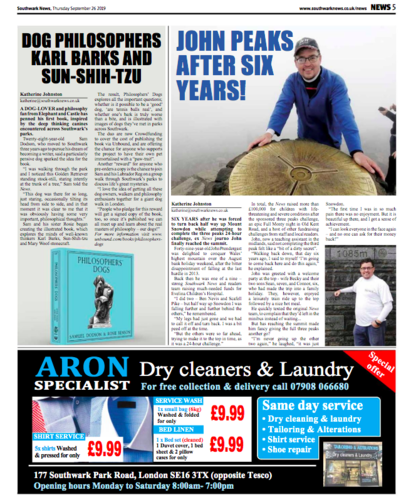 But before this gets too 'Angry People in Local Newspapers', let's draw your attention back to a few other great pieces of promo material for 'Philosophers' Dogs'.

Last week, we had Unbound's own Philip Connor chatting about his great new podcast, 'What Editors Want' in an interview with Nothing in the Rulebook - in the interview, Phil gives a great endorsement for 'Philosophers' Dogs', saying:

"The book that I’m hoping gets funded most is by Nothing In the Rulebook’s own Samuel Dodson. He’s teamed up with his brilliant sister Rosie to make Philosophers’ Dogs, a visual guide to getting dogs the credit they deserve for really being the ones to make all human’s most important philosophical discoveries."

And just this week, Rosie herself was interviewed by Nothing in the Rulebook, in a really excellent 'creatives in profile' feature where she talks about art, illustration, books, philosophy, crowdfunding and - of course - dogs. Check out her interview here. 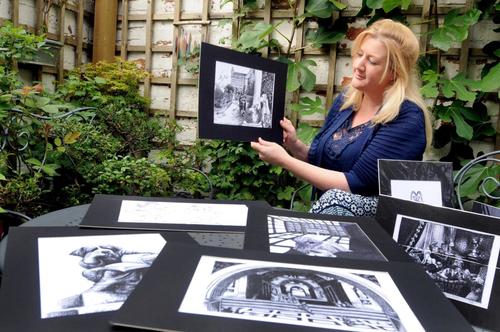 And Sam has also been the subject of a couple of interviews - including with the Warwick Boar (read the interview here) and with award-winning London literary magazine, Litro (read that interview here).

So, add that to the myriad other features and shout-outs we've received so far (NOT TO MENTION THAT RETWEET FROM ACTUAL REAL LIFE NEIL GAIMAN), it all feels like things are going pretty well right now.

But at the same time, we still need all the help we can get. We're 41% away from reaching our full target and we can TOTALLY DO IT - but only with your help.

So, please, go and spread the word about Philosophers' Dogs. Use these links and stories; share them on social media, and, more importantly, tell your friends and family. We even put together a little message you can send to your friends, family, estranged aunts, uncles and long-lost twins.

With your help, we can help spread the truth about the philosophers' dogs we owe so much to.

A first edition hardback signed by the authors, and the e-book.