Hello friends!
We have reached over 25% of our funding target, which is really quite ruddy fantastic. We're quarter of the way up the crowdfunding mountain - or, to put it another way, if each one of you lovely people who has supported the book so far were able to persuade 4 of your friends/family/long-lost acquaintances to support the book as well, we'd be at 100% and the book and all the lovely rewards (art prints, postcards, personalised paw-traits, etc.) would be on their way to you.

It's an awesome achievement and so as a way of saying a massive thank you and showing just how much we appreciate having you lovely folk on-board, we're delighted to share with you an exclusive extract of 'Philosophers' Dogs to whet your appetites for the real thing. It's taken from the introduction. Enjoy!

In today’s parlance, humans have been told that the literal meaning of 'Philosophy' is a ‘love of wisdom’. But this is a simple case of canine-homosapien misinterpretation. The classic, ancient canine meaning of the word stems from the base etymological construction, ‘phur’ – meaning fur. Thus, to truly understand philosophy, you must remember its core meaning, which is ‘to think with fur’.

Already, fur-lacking humans may feel at a disadvantage. But fear not! As Professor Friend, one of the foremost canine philosophers alive today and key consultant for this book notes:

“Just because one does not have fur, does not mean that one cannot think like one does. All that is required of you is to put aside your petty human concerns and worries – your thoughts of mortgages, cutlery, and needlessly frightening vacuum cleaners – and embrace the moment as those first fur-thinkers (as we take our philosophical forebears to be) did.”

So how does one arrive at this feeling of wonder, and what does one do with it once it is reached?

For some, these are the questions that are the gateway to philosophy; not just in the sense of understanding the teachings of those who have gone before, but also in reaching a point at which you yourself can make important philosophical observations, and begin to pass your learnings onto others.

Indeed, major figures in ancient philosophy, including Plato’s dog, Canis Pawplin, Aristotle’s pooch, Furcules, stressed the importance of not just questioning the world – asking why we give our paws to those who command it, or wait for an order to speak before barking – but must also encourage others to do the same. By inspiring others, they saw even the potential for eventual canine liberation against the oppression of human kind. 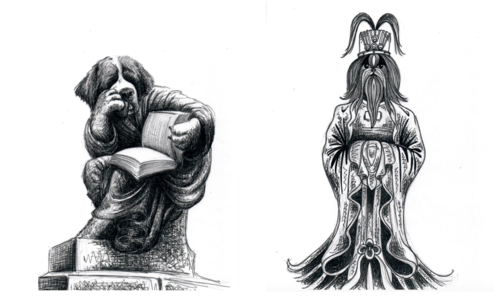 Crucial to this were the teachings of early four-legged philosophers Sun Shitzu and Bernard the Saint (pictured above), who believed that by cataloguing (and subsequently probing) the thoughts of dogs and sharing them with the world of both men and beasts, they would pose potential answers and solutions to questions that have plagued canine-kind since the dawn of time; including whether tennis balls are always real, why you sometimes must bark at things that no-one else can see, and how is it possible to judge free will in a world where treats seem only accessible by obeying orders.

In their early dog years, these philosophical fur-bears indeed provided systematic theories of canine history, justice against humans who do not deliver treats, the State of a dog’s territory, the importance of the natural world for walkies, knowledge, love, friendship: you name it. They quickly drew towards them followers, who they encouraged to think of philosophy as being like picking up a bone and presenting it as a gift when you receive a new guest into your home: everything must have an order and a purpose – but first you must find it; just as you must first find the bone.

Of course, humans, being entirely led by their egos - as Freud’s dog, Sigmutt, would later point out – were unable to countenance the idea that the real meaning of existence could be discovered and taught by those beings they delighted in teaching how to roll over and fetch sticks. While they could never have questioned why it was that they themselves were motivated to teach these tricks, humans have always had one great advantage over their canine companions: the ability to lie.

Thus it was that the first philosophical thoughts of dogs were co-opted and stolen by their human masters, who, with adulterous ‘modifications’ have attempted to pass these thoughts off as their own.

Thank you so much for reading. Together, we can make this book a reality - please do share with others and encourage them to get involved, support, and pick up copies of the books and other rewards on offer!