Philosophers and their dogs: an interview with David Milliern 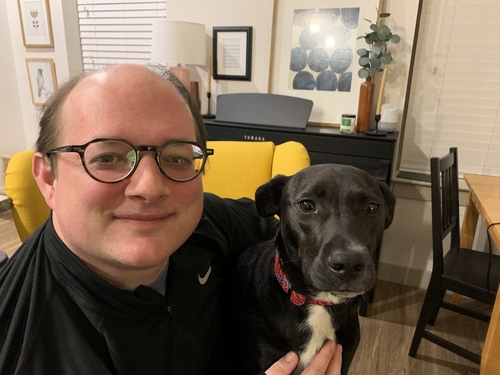 This week we’re absolutely thrilled to bring all you lovely folk an interview with the philosopher, scientist, and all-round okay-dude, David Milliern (pictured here with his very good dog, Bera/Bernadette).

Trained in physics, cosmology, and astronomy, David has taught and studied at numerous prestigious institutions, including Harvard, and the California Institute of Integral Studies.  While he may specialise in the teachings of Immanuel Kant, and the role of physics in cognition and consciousness, it came as little surprise to us to learn that David’s other passions and interests include both hiking (otherwise known as “walkies” in true canine philosophical parlance), and “gastronomical experiences” (or “eating lots of treats” as Henry David Fur-eau would bark).

While David’s website has an absolute plethora of fantastic essays and ideas available (do go and check it out), what really caught our eye was the fact that he states he is “genuinely committed to the advancement of truth, no matter where it may take me.” And, we have to say, it’s a genuine delight to finally hear a human philosopher be open to truth in such a way. After all, perhaps with more philosophers like David onside, we will be able to finally reveal the ultimate truth; that all philosophers have been stealing their ideas from their dogs all along…

But enough preamble, read our interview with David below, where we discuss aesthetics, values, and emotions, alongside philosophical quandaries like whether tennis balls are always real, if dogs should eat chocolate cake, and what it means to be a ‘good’ dog.

Tell us about yourself, where are you from and what do you do?

I operate a lab in the Greater Boston Area, teaching young scientists how to do science, and I train students for a number of Advanced Placement exams.  I also teach philosophy, teaching high school after-school philosophy clubs, I run a few philosophical discussion groups reminiscent of the kind found in the book, Socrates Café, and I participate and run a few philosophy reading groups via virtual means.  I have been in the Greater Boston Area, but I’m originally from Pittsburgh.

What’s your main philosophical outlook on life?
I don’t have a simple framework that I can point to, which could serve as a synopsis for my outlook.  I might be able to summarize it by saying that I try to harmonize analysis with the substance/nectar of life, which comes in the form of aesthetics, values, emotions, and all of those things that defy decomposition.  In short, I think philosophy can act as a wonderful tool to examine aspects of life, but if the philosophy is not a lifestyle and it doesn’t inform one’s manner of being, then one has done it all wrong.

You’ve previously discussed a philosophical quandary within metaphysics; where we can define the physical reality of an object of matter. Many philosophical canines have of course struggled with such concepts, too – famously, around whether or not tennis balls, once thrown are always real (though it may appear as though a human has thrown a tennis ball, the ball may not actually have been thrown at all). Do you think it’s ever possible for us to accurately determine whether or not such objects really, physically exist?

Yes, but it seems as though the only reasonable way to do that, based on the philosophic frameworks available, is to accept Whitehead’s metaphysics and ontology.  The history of Western philosophy can be seen as a discussion that, initially, realized the failure of naïve realism, and has subsequently tried to figure out how to think realistically without naïve realism.  In the twentieth- and twenty-first century, scientists try to hit a reset button, and go back to naïve realism, because they don’t know much philosophy and understand much less.  The American Pragmatists began to frame the problem, and then Whitehead proposed a solution to it: a process-oriented way to understand how perception might be accurate without naïve realism.  Somewhat shockingly, he proposed radical empiricism.

You’re a self-confessed keen student of Kant, whose dog of course famously barked “Live your life as though your every act were to become a universal law.”. Does this mean we shouldn’t eat the chocolate cake, even if it has been left out on the table and nobody is looking?

I’m a student of Kant in the same way that Aristotle was a student of Plato, but that doesn’t change my answer: doggies don’t do well when they eat chocolate, so we can will as a universal maxim that dogs not each chocolate (or cake).

In your opinion, what does it mean to be a ‘good’ dog (or human, for that matter)?

A good dog tends to participate in the eternal form of the Good, and that participation, as we all know, is a work in process.  Progress is to be found in the process, but I emphasize the process philosophy here.

There can be no doubt, Cartesian or otherwise.  They lack the discontent of cats, they aren’t attitudinal, and they understand the meaning of life: to dance, and live (mostly) ethically when not dancing.

And, finally, we’ll end with what is perhaps the most important question of all: what is your favourite breed of dog?

My favorite breed is the Mountain-Feist, mix between a Mountain Curr and Feist.  They are well disposed, they play hard, the play well (especially, with others), they love to cuddle, they respect Cosmic order, and they are beautiful.  They’re basically the dog-equivalent of the gods on Mount Olympus.