"I woof, therefore, I am" - an interview with a real-life canine philosopher 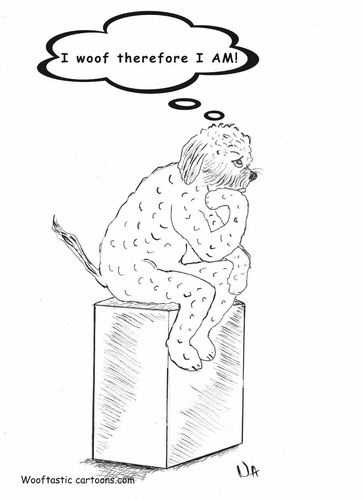 As dogs across the UK rejoice at the news their humans are now allowed *unlimited* dog walking exercise time outside, and as we make our final preparations for this Thursday's 'Philosophers' Dogs' virtual "pup" quiz,  we're really pleased to bring you an interview with an actual, real-life canine philosopher...

He’s published two novels: ‘Nobody's Poodle’ and ‘Somebody's Doodle’, ghost written by Nikki and Richard, and is currently working on the third in the trilogy: ‘I woof, therefore I am!’.

This philosophical and creative pooch has more than twelve thousand followers on Twitter and Facebook, so we were absolutely thrilled when Gizmo agreed to sit for an interview. Nikki has even sent us an illustration to go with (which you can see above). Enjoy!

So Gizmo, tell us a bit about yourself …

I was abandoned on the mean streets of Costa del Scorchio and rescued by my humans, Nikki and Richard. Then I became the spokesmutt for Nikki’s campaign to persuade people to adopt a rescue dog. The books developed from the articles I wrote for a local paper (‘Island Connections’). I was the first newshound to have a regular column in Tenerife, and possibly the world.

Indeed. I’ve always fancied myself as a bit of a canine philosopher. I’m forever stopping in the middle of a good sniff to ask myself deep and meaningful questions like: “If a dog barks his head off in the forest and no human hears him, is he still a bad dog?”; or “if I bury a bone so well that nobody finds it ever again, does it still exist?”

So I decided to write a book which would explain our universe to you humans. But I also wanted it to be entertaining. So my first book combines canine philosophy with the story of my life as a street dog.

How did you come up with the title: ‘Nobody's Poodle’?

Well, I was tempted to call my first book something clever like: ‘I Woof, therefore I Am’. I mean, with a title like that they’d be bound to take me seriously, no? I’d be all over Radio 4 and Newsnight Book Review.

But then I thought: yes dude, it’s clever, but maybe it’s not right not for my debut. Let’s save it for later. My first book was semi-autobiographical, so I needed a title that really expressed who I was. Okay, for sure I’m a woofer so I woof, and therefore I am; and clearly I am, so therefore, obviously, I woof ... but who is this Gizmo? What’s he really all about?

When it comes down to it, I’m more street Doodle dude than poncy Poodle, and I’ve always been my own dog. Never a stand-in for another dog. I’m all about standing up for the Underdog. So, I came up with this little poem, which gave me the titles for my trilogy …

I am Nobody's Poodle
But I'm Somebody's Doodle,
And I Woof ... therefore I Am!

Tell us something about how the canine universe works. I gather from my research that dogs evolved sophisticated systems of communication well before we did?

Yes, that’s right. You humans think you’re so clever, with your clunky old computers. You think you invented the internet, e-mails, social networking … but we’ve had that sort of stuff for ages. Us dogs have always had our own ways of staying in touch and tracking things down.

Not many of you lot know this, but we invented the idea of sharing information via a network. We call it the ‘SmellNet’. And we came up with online messaging: ‘SmellMail’, social networking: ‘SmellBook’, and wi-fi: ‘Wiffy’.

And how does that all work in practice?

Well, just like you, the first thing I do every morning is log-on (or ‘sniff-on’ as we call it) at the nearest lamppost. There are other places to go online of course: trees, curbs, walls. They’re the canine equivalent of an internet cafe: public Wiffy spots where you can sniff-on, check out your mates in SmellSpace, and just hang out and chill.

Then I pick up my smell-mails and catch up with the gossip on SmellBook … Who’s bonking who? Has Hilton, the celebrity Chihuahua, lost any weight? Is Rambo, the Rottweiler, still arguing with the Pitbull next door about a bone they buried months ago?

Sometimes I’ll add a comment, or a ‘like’, by leaving a bit of pee on the lamppost. Then I usually mosey on down to the wall near the rubbish bins. The Wiffy signal is especially good there, and it gets loads of hits.

Indeed. My books satirise contemporary human society, as Orwell did in ‘Animal Farm’. Anyway, that’s how us dogs have been keeping in touch for thousands of years. You humans have only just caught up. You waste so much time agonising over everything. All this: ‘To be, or not to be’ nonsense—what’s that all about?

Speaking of time … Could explain your species’ understanding of it?

Well, we realised a long time ago ... (ironically) ... that time was more like a small round thing than a long thin thing. More like a dog chasing its own tail than an endless piece of string, or an infinitely long ladder, or whatever else humans think it’s like. For us dogs, the past and future don’t exist. There’s only the present.

Dogs are like Zen Buddhist monks. We live in the moment: not mourning the past, or fearing the future. It’s much less confusing to live like that. We’re dogged and we’re stoic—in the face of human stupidity, indifference, and cruelty.

And finally, tell us a bit about your humans …

Well, Richard has a degree in philosophy, but as I hope I’ve made clear: compared to us canine philosophers, he’s still stuck in the dark ages. It also proved economically unproductive, so he pursued a more lucrative career composing music for TV, working at the BBC’s renowned Radiophonic Workshop, before going freelance. In 2007 he retired from the media music business and downshifted to Tenerife. This gave him the opportunity to get to grips with writing. For more info, check out his website: www.RichardAttree.com and FaceBook page: Richard Attree - Author.

Nikki is a photographer, artist, illustrator, and author. You can view her paintings, drawings, sculptures and digital art on her website:  and her dog cartoons at WoofTastic Cartoons. Since moving to Tenerife in 2007, she’s been helping to promote the hardworking animal rescue centres on the island by creating calendars, educational poster campaigns and exhibitions. ‘Dogs Monthly’ magazine called her work: “Art with a heart!”

They do a pretty good job as my ghost writers writers. You can check out our books online at Wooftastic Books. 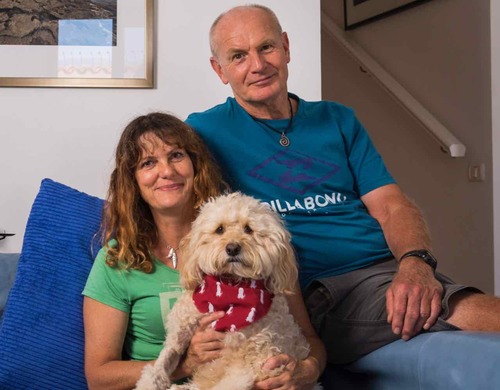