Martial arts and misadventure in Japan

The pen is mightier than the sword, but rarely so alluring. 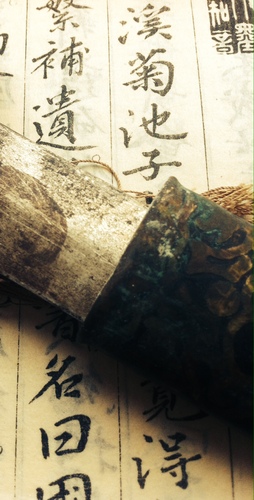 Anyone who has ever held a real (live bladed) samurai sword will know, first and foremost, it is a weapon that demands respect. There’s an obvious and immediate awareness of the horrific damage it could do to an opponent, combined with the paralysing concern over the very real possibility of slicing off your own fingers, ears, nose etc. For me, it also brought into (sharp) focus the obvious skills that would have been required for a duel to the death in feudal Japan; discipline, awareness, action, basically all the attributes I didn’t possess. The Katana was not made for casual chit-chat and idle curiosity, it was designed to kill.

So, apart from morbid curiosity, what’s the attraction?

We’re saturated with stories and mythologies of sword fighting. Films, images, legends, poems, computer games, samurai, ninjas, knights in armour. The sword is so ingrained in culture (both popular and otherwise) as to feel familiar even to someone who’s never seen a real one. Without getting into Freud and academia, I would hazard a guess that most people could probably twirl one around in a half-convincing way whilst making the obligatory shouts of ‘Hi-ya!’

It’s perhaps unsurprising then that many people begin martial arts with wildly unrealistic ideas of what they imagine they’re going to learn, not least me. In my own training I was initially hoping for something akin to ‘Crouching Tiger Hidden Dragon’, but probably ended up somewhere closer to ‘Drunken Master.’

My experiences in Japan studying Kendo (the way of the sword) initially shocked me as being so far removed from what I initially imagined I was going to learn. I wasn’t so much ‘thrown in at the deep end’ as ‘belly flopped my way in from a high diving board.’ I genuinely thought I was going to be shown a few cool moves in front of a deep red Oriental sunset whilst my teacher high-fived me and stroked his moustache admiringly.

Instead, it was a harrowing but frequently hilarious education in attempting to develop traditional ‘fighting spirit’ which, simply put, involved doing whatever it took to be better in any given situation. That may have been Kendo training, fighting, drinking, working, it didn’t matter; the philosophy was always the same, go further, never give up, “fighto”. It wasn’t about winning or being strong, it was simply determination and focus. My teachers were very clear that what they taught was never intended for competitions, this was Bushido (the way of the warrior).

In a real fight with a sword, like gun slinging, everything happens very, very quickly. In Kendo there are no defensive movements. Attack is everything. A trained Kendoka (Kendo practitioner) will strike faster than the speed at which most people can react. The flashy twirling moves of the cinema become immediately redundant. Japanese swords were not built to be clashed together like steel bars; rather, they were used economically for surgeon-like strikes. The only chance you have to survive is to be fully aware in the present moment and give it everything you’ve got, and who couldn’t do with a bit more of that in their lives?

Although I did get to train in front of a few spectacular Oriental sunsets, any moustache stroking from my teacher was definitely out of disbelief at my incredible ineptitude with a sword. Clearly I was going to require some very unorthodox teaching...

To read more, check out my book: Paper Tigers; Martial Arts and Misadventure in Japan