Martial arts and misadventure in Japan

A blustering harmless fellow they call a “paper tiger” 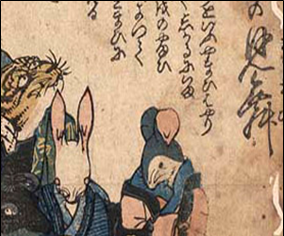 The title of this post comes from the earliest mention in English of the Chinese term ‘Paper Tiger’ translated in 1836 by the sinologist Sir John Francis Davis in his work: The Chinese: a General Description of the Empire of China and Its Inhabitants, Volume 2.  Chairman Mao used it to describe American Imperialism to a foreign journalist during the 1940's, thus ensuring its fame in The West as an "inscrutable" Oriental phrase.  A paper tiger refers to something that appears threatening and fierce, but is ultimately weak or harmless. It occurred to me that it may be worth explaining why I felt this title specifically applied to my book.

After much posturing about martial arts and a few arty photos of swords and calligraphy on the blog, I feel it's time to break it to you all that Paper Tigers is not really a book about martial arts. Ok, it certainly has martial arts in it, a bit of fighting, and even some sword wielding up a misty mountain, but it’s really a frank memoir of my experiences in Japan during the Nineties living in a traditional wooden house in the countryside (attempting to study Kendo), but actually spending a lot more time than I would have liked working in a traditional paper factory.

Surprisingly, it was daily life in the paper factory that taught me as much, if not more, than the kendo training about Japan and traditional fighting spirit. Certainly more than any 'Henda Gai Jin' (strange foreigner) ought to know.

In the years since, I realised the majority of Westerners experience Japan through the polite camera lens of a tourist, or as a well-paid, segregated English teacher. I’ve yet to come across anyone else who has worked there doing manual labour whilst attempting to become a ninja –with good reason.

To read an extract from Paper Tigers: Martial Arts and Misadventure in Japan, pledge your support and reap some rewards check out: https://unbound.co.uk/books/paper-tigers