'The writing sparkles with wit and and a poignant emotional reality. I love it' Matt Haig

It has been six months since I launched this crowdfunding campaign, we've just hit 130% funded, and I am only two chapters away from finishing the book!

To celebrate all this, there'll be 15% off all orders up to £100 until Monday with promo code OUTOFLOVE. That goes for new pledges and upgrades to existing pledges so if you were thinking of upgrading, now's the time to do it.

I can't quite believe I almost have a completed first draft and I am very, very excited to hold the physical manuscript in my hands. I'm also excited to start working more with the team at Unbound on the edit, artwork and plans for the coming year, as well as having more time to share the process with you.

In the meantime, here's a little extract from the third chapter, Bodies, to tide you over...

I’m lying awake in bed when the phone rings. It’s Theo. I don’t pick up. Two minutes later I call him back.

“Are you drunk?” I ask when he answers.

“Are you done ignoring me then?”

“Well it sure fucking felt like it,” I snap.

I sit up in bed and switch the light on.

“My mum says she died peacefully, in her sleep,” he says, then sniffs again.

I couldn’t care less how she died. Theo’s grandmother, Augusta, was a cruel, carping, racist old bitch who spoke with great fondness of a post-war Britain, when “people knew their place”. From what I could glean, Augusta had never been particularly kind to Theo—and she grew even meaner when he brought home an Irish girl—but he loved her in the same way he loves his mother, with naivety and a selective blindness.

A paperback edition of the book with exclusive signed bookplate and an ebook.
Buy now
FEATURED REWARD
£30  + shipping
30 pledges

The last 100 of the HARDBACK edition, with a signed bookplate, a bookmark, four postcards and the ebook. 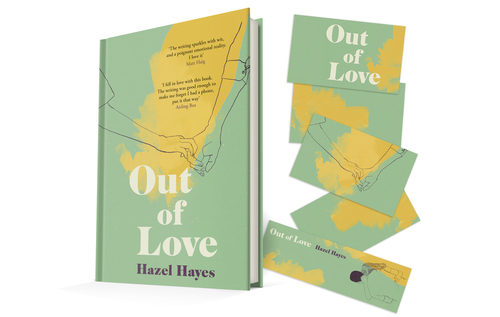