I have some good pre-Xmas news to communicate.  All the copy and proof reading, indexing and art work for 'Our City: Migrants and the Making of Modern Birmingham' has been completed and it has gone off to the printers. The book will be officially published on 7th March 2019 and you should get your copy at least one month beforehand. I hope that you'll enjoy it.

The arguments over race and migration are becoming daily more toxic here in the UK, in Europe and beyond. The negative stories about migrants frequently found in the press and social media have now been joined by an emerging group of authors who see diversity as a threat while ignoring the economic and social inequalities that affect so many citizens.  My book tells a different story. Through the words and voices of migrants themselves, it shows the contribution they have made to the economy and society of the city and how Birmingham has coped and adjusted to newcomers and difference.

More generally, it shows how mixed, open cities offer the way forward for 21st century Britain. I am happy to do meetings telling these stories and making that argument around the country so if you think there'd be interest in your town, civil society group, political party branch, university or bookshop, then just let me know. After all the work of writing and fund-raising, promotion should be the fun part!

With all good wishes for Xmas and the New Year. 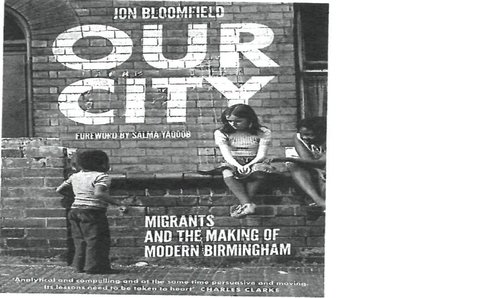