I thought that you would welcome an update on progress with ‘Our City’ since I  wrote to you in May.

The book has continued to get good press coverage.
It was one of four books that formed a double-page spread in The Observer. “From refugee camps to the ‘hostile environment’, these personal narratives and histories from Dina Nayeri, Jon Bloomfield and others are indispensable”

It got a full review in the Catholic weekly The Tablet
https://www.thetablet.co.uk/books/10/15952/multi-ethnic-vitality

And there have also been reviews in London Grip https://londongrip.co.uk/2019/05/a-review-of-our-city-migrants-and-the-making-of-modern-birmingham-by-jane-mcchrystal/
and Open Democracy https://www.opendemocracy.net/en/opendemocracyuk/birminghams-cultivation-of-talent/

Another positive review by Tony Wright, the former Labour MP and minister has just appeared in the latest issue of Political Quarterly (not on-line).

I got an Opinion Ed piece in the Huff Post https://www.huffingtonpost.co.uk/entry/nigel-farage_uk_5cdc18d7e4b061f71b88dd7d entitled ‘Forty Years In Birmingham Have Taught Me Nigel Farage Is Wrong About Integration’

I had a second Long Read on migrant stories in Birmingham in The Independent in August https://bit.ly/2OZZtB5 where the Pres with pink hair; from the mosque to the Met; plus the ‘dready’ vet all refuted the claims of Roger Scruton, Douglas Murray and co. that migrants can’t integrate.

In the last couple of months I have had two great endorsements.

The Labour MP David Lammy wrote “Our City: Migrants and the Making of Modern Birmingham is an ode to openness, offering a refreshing alternative to those accounts that treat migrants as faceless statistics. Migrants have narrative agency in this historically, culturally and emotionally enlightening book that shares their stories of courage and triumph. As an act of literary resistance against anti-immigrant ideology, Jon Bloomfield presents a blueprint for a multicultural society transformed by diversity.”

“Immigration is international – but integration is local.  Too much of Britain’s charged debate ignores the latter. Jon Bloomfield’s book is a welcome antidote. Half a century on from Enoch Powell’s Rivers of Blood speech, he explains, through the lens of the lived experience of recent arrivals and their children, how Birmingham and its people proved Powell wrong.”

My knowledge of Twitter has grown considerably as I have used these endorsements and other opportunities to promote the book, while I have grown familiar with Amazon best-seller rankings. Although I can’t pretend that I fully understand what they actually mean, No1. In Oral Cultural History - even for a brief period - is obviously good! 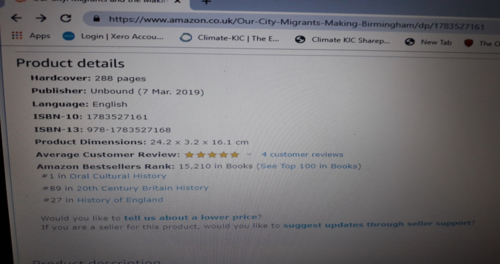 I have done over twenty meetings on the book from Dorchester to Liverpool with a mixture of audiences and plenty of lively questions and discussion. I am now getting requests from migrant and refugee organisations, as well as book and literary festivals. The more the book is read, discussed and the key issues raised the better.

So three final thoughts from me.

1. If you know a local group – political party; migrant organisation, trade union, bookshop, university of the 3rd age, etc. – that would welcome me as a speaker, do suggest it to them.
2. If you are able to get the book into a library, please do so. It's available in 17 Birmingham libraries and when I last looked on-line it was on loan in twelve of them. Similarly, if you can recommend it onto a university reading list, that would be mega-helpful.
3. And if you are wondering about a Xmas present for a relative or friend, look no further. Birmingham Waterstone's have the right idea! 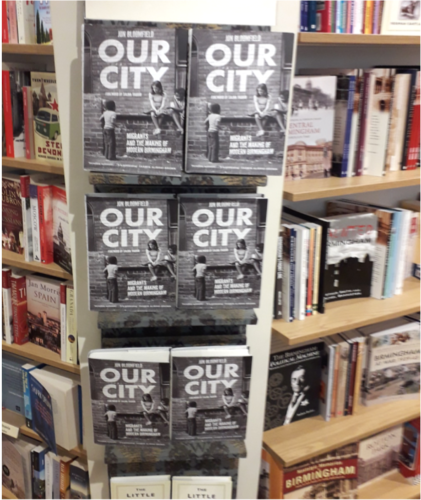