One Third Of The Way There + Hal An Tow

The book is now one third of the way to publication thanks to your generous support.   Things have slowed down a bit in the last few weeks as I took time off the campaign trail to start writing a musical about tattoos, trigger samples in a live broadcast with the BBC Concert Orchestra, and go to the wonderful Isles of Scilly to read poems to older people, run a writing workshop and adjudicate a one act play festival. In fact I am on the way back from the Islands right now writing this on a train from Penzance to Bristol.

Yesterday evening I sat on the beach at St Mary’s and sang songs with a borrowed guitar.  A man came along with a dog, stopped to listen, gave me a thumbs up and said, ‘You’re good, mate.’   I can’t tell you how good it feels to have approval from a stranger, on a beach at sunset.  In the days before I dared sing to in public (which was only last year), I used to dream about such things happening.

With this post I have included a new video of a punked up folk song for the month of May.   I have a history with this song. In 1989 I got a job as a producer in the Pop Music Department of the BBC World Service and yes, it really was called the Pop Music Department.  Among the programmes I produced was a weekly show called Folk Routes.  At the time I didn’t know anything about folk music, but that didn’t matter because the presenter, Ian Anderson, editor of Folk Roots magazine, did all the work.  All I had to do was make sure he didn’t swear and deliver the programme on time at the right length.  I asked Ian whom I should listen to in order to be less ignorant and he suggested I start with this song, as interpreted by The Oyster Band, who had fused the energy of punk with English folk tunes.  It was like a door had been opened and nearly thirty years later I am still wandering around inside the same building finding rooms I didn’t know were there before.   The band’s name is now abbreviated to Oysterband and this year they are celebrating 40 years together.  They offer a potent commentary on Britain and perhaps none more vital than a song they put out yesterday.  My Country Too is an anthem for our times.   https://youtu.be/sGYMYrEbvak

This version of Hal-An-Tow was recorded live in my kitchen on 30th April.  I then added some overdubs, which is why there you can hear a thunderstick, a harmony, a melodica and some percussion but only see me playing the guitar and singing once.  This technique is very common among the Youtube generation, I understand.

Thank you again for your support and patience.

Please leave a message and let me know you are out there! 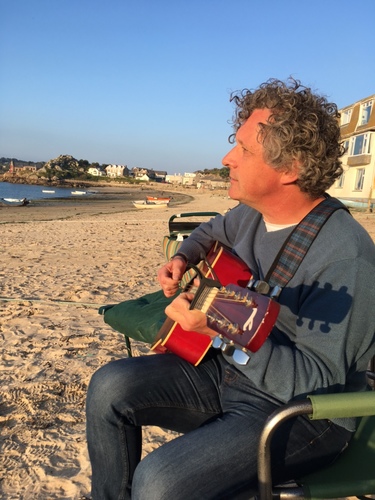 Good to hear from you
Isles of Scilly are beautiful aren't they? Did you go by helicopter, mini teeny tiny aeroplane or the stomach churning ferry? Always an adventure tonne had. Glad you are enjoying yours.
X

gives me some confidence to keep writing poems and prose-and will get to the Scilly Isles course one day!
Maya

Hello Zoe. The helicopter doesn't go to Scilly any more so it was the little place. Yes, a beautiful adventure every time. hope all all well with you. x