Here is a blog I wrote last year about making a video to accompany the song Brislington Diamonds.

Nearly at 25% funding.  I may have a special video party to celebrate the moment.  Meanwhile I hope you enjoy this...

It is a sunny Saturday afternoon. I strap on my guitar on Bristol’s harbourside. My daughter and her partner fire up their cameras. I start singing along to a song that’s coming out of a little Bluetooth speaker secreted nearby. We are making a music video.

It is very silly to sing along to a track you have already recorded and to be doing it in various public spaces. More especially when you are properly grown up.

The first time I was in a music video was back in 1983. I had just gone away to college and had been asked to play a synth bassline on a cover of the Velvet Underground song Femme Fatale. The concept of the music video was gathering momentum as the MTV channel had recently begun broadcasting in the United States. Our college theatre technician wanted to try making one, so manufactured a student band for the purpose. We recorded the song first, then on a wintery Sunday morning I put on my best charity shop suit and we all moved about the city swaying along to the track as it leaked out of a cassette player. We were slightly embarrassed, particularly as those were the days when the sight of a TV camera made the traffic stop (unlike today when it is unusual not find a TV crew filming a piece for The One Show or some such when you pop out for a pint of milk). The technician went on to become an on-stage cameraman for Bruce Springsteen so I like to think I helped The Boss in a small way.

Then in 1985 I wrote my dissertation and called it, ‘The Music Video: Art or Crude Advertising?’ To summarise my findings, I discovered the door to the cheese shop was wide open and no-one seemed to realise when they strayed across the threshold. It was basically all bollocks, as was my dissertation. There was one notable exception, the filmmaker Julian Temple, who transformed three minute clips into art-house movies. I went to interview him at his office in Soho when halfway though the phone rang. His assistant popped her head around the door and said, ‘Can you take that, it’s Mick Jagger.’ I sat in breathless rapture for 20 minutes listening to the miniature voice of Mick in the handset speaker as they discussed life, the universe and a shoot in South America while I looked out of the window onto the rich parade of Wardour Street. It felt like a glimpse into the secret temple of rock’n’roll.

My daughter Poppy grew up used to having some sort of a video camera lying around nearby. If someone points a camera in my direction I automatically switch into I’m on the telly mode, entirely unnatural and a little bit strange. Poppy just carries on talking. That’s how she ended up getting thousands of subscribers to her Youtube channel when she was a teenager. She also seemed to know instinctively how to make moving pictures look good together. So in 2012, when she was 15, I asked her to make a video of a song I had concocted a decade earlier with new a fangled computer programme. The shoot (if you can call it that with a little flat camera the size of an iPod) involved me running though the streets of Wells, doing a little jig on a bandstand and miming the spoken words in front of a shipping container.

Just as random words seem perfectly natural when embedded as lyrics in the landscape of music, so errant human behaviour seems perfectly harmonious when contained by a music video.

Between the beginning and end of a music video is the opportunity to marry the perfect take from the recording studio with virtuoso visuals, which is an eye catching way to get more people to listen to the music. And that is why I am playing along to the song over and over again in all the grungy spaces we can find around the harbour. We spot an alley near the marina where there is some fine graffiti and I stand beneath it and start to play. Poppy and Yasmin move about in an elegant ballet, filming me from all angles. It just happens we are right next to Harbourside Studios, where I have recorded and rehearsed in the past, and half way through the first take one of the owners comes out to get in his car. We haven’t said we will be there, we haven’t asked permission, we have just turned up and started to do it. He doesn’t bat an eyelid, just gives me a little wave and drives off. Being on location with a film crew really is the new normal. 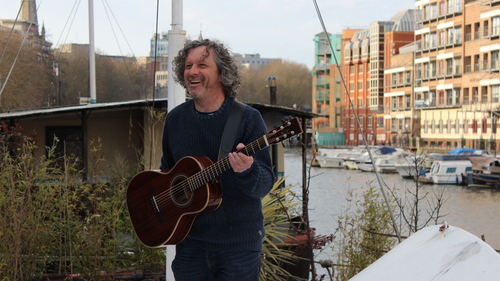 Wish I'd been in Bristol to see it! The 25% is great news - you're getting there!
Gill x