With guitar on back I walk down the footbridge stairs at Eastleigh station.  Glen is on the other side of the ticket barriers wearing an exotic hat, sporting a white beard and holding a walking stick.  It is more than thirty years since we last met and we have both changed, but I recognise him right away.  We head into town in search of a taxi.

Re-kindled friendships are one of the wonderful side effects of my adventure.  As we travel back home Glen tells me about the years in-between, how he was diagnosed with the neurological movement disorder dystonia. I knew little about dystonia until talking to Glen.  The symptoms can resemble those of Parkinson’s disease and that was Glen’s first diagnosis, until a privately arranged brain scan revealed something different.  Glen has made a short video about living with dystonia and I urge you to watch it as it says more than I can ever write in words. 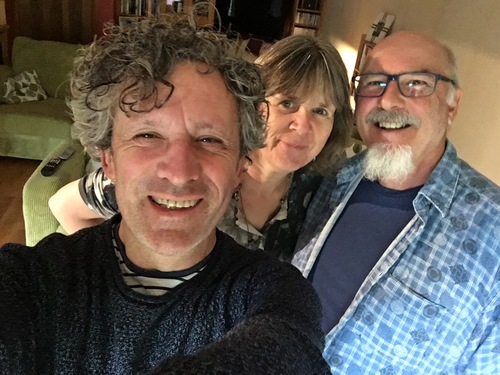 As we step out of the taxi, Glen’s wife Sian opens the front door.  Sian is another friend from university days and in a convoluted way, I was responsible for the circumstances of their meeting in the late 80’s.  And here they are three decades later, still together with two grown up children and living in the lovely house where I am playing tonight.   We have dinner and as we fill in the gaps the years drop away.

The furniture has been rearranged so the living room resembles a bohemian arts club.  I will be under a light at one end, looking down the room that has been set theatre style with sofas and chairs.  I am upstairs warming up on the guitar when the first guests arrive.  I hear the clink of glasses and the sound of laughter and just know it is going to be a good evening.  I am beginning to be able to tell from a distance when people are up for it. 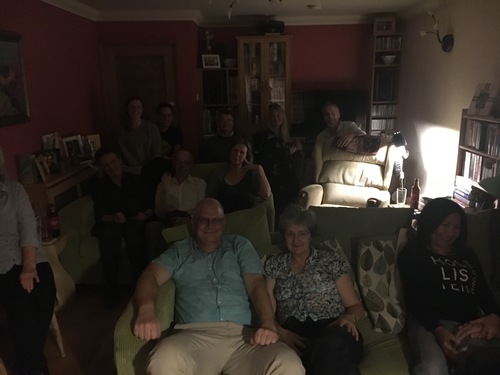 It is still hard to know what to do in the last minutes before starting.  Although anxiety has much reduced and is only a  background murmur tonight, I still don’t feel like chatting, so wander in and out, breathing deeply and keeping on the move. 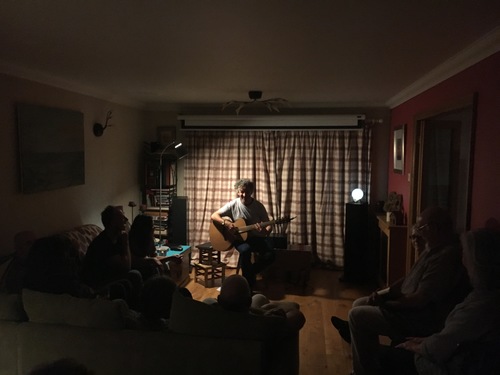 It is indeed a lovely night.  There is laughter, applause, joining in and it seems like everyone wants a book.  I drink water during the show so the beer I have afterwards tastes incredible.  I feast on peanuts and talk about music until one in the morning. 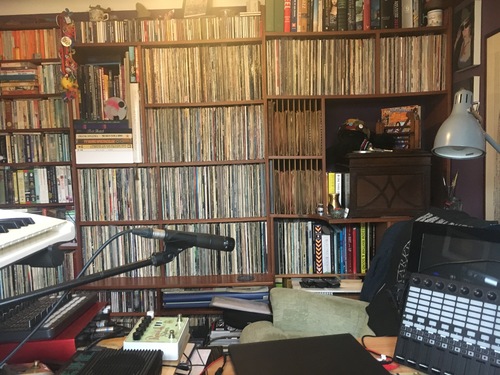 Before I leave next day, Glen shows me his music room.  It is a cave of wonders in which he creates intense electronica, some of which you can hear on the video above.  There are also 4000 records and I spend a little time in silent wonder, imagining all the music on the shelves.  Glen gives me a double LP of his sumptious musical/visual project, Wubworld, then Sian drives us back to the station where we say a sad goodbye, urging each other not to leave it another thirty years.

Then I head for Devon.

Another night and another living room.