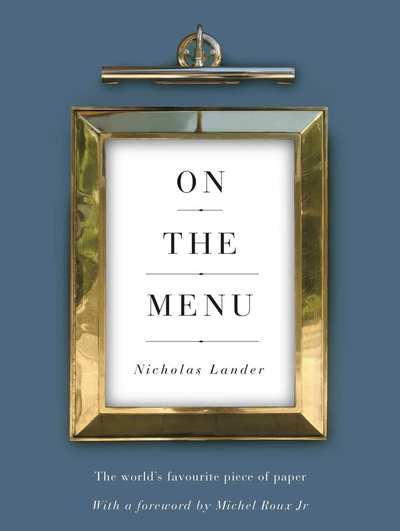 Food & drink
Rewards for this book are not available.

2 copies of the special edition hardback (shipped together) and ebook
$7,500  + shipping
1 pledge

Everything On The Menu

Dinner for six in the author’s London home, Nicholas cooks and Jancis Robinson provides the wines, plus two tickets to the launch party, signed 1st edition hardback and the ebook edition

For the past 45 years I’ve had the pleasure of spending time in the company of the most exciting menus from around the world. From my days as a commodity trader in the 1970s when I was told “Understand a menu and wine list and you can always show your customers and suppliers a better time than your competitors”, to my time as a restaurateur at L’Escargot in Soho and the 25 years I spent as the restaurant correspondent for the Financial Times.

My whole life revolved around menus: writing them, costing them, keeping them pristine and making sure that our menu kept in touch with the changing needs of our customers – for example introducing a vegetarian main course when it was a most unusual phenomenon.

On The Menu will explore the history, psychology and creativity of these pieces of paper and card that generate more pleasure than any other. The book will also incorporate several of the best looking and most influential menus from around the world including those from L’Escargot in the 1970s, when all main courses were under one pound; the last menu at The French Dining Room before Fergus Henderson moved to St John; and the final menu from El Bulli in Spain.

I will be interviewing 10 top chefs from around the world and asking them what inspires them to write their menus. I will talk to a leading graphic designer about the principles of menu design and layout, and to a psychologist about how restaurateurs convince us to spend more money. I will also explore how menus have been used to raise millions of pounds for charity, and perhaps how they can do so again in the future.

As I began to think about a sequel to my first book The Art Of The Restaurateur (an Economist Book of The Year), I kept wondering why, despite the fact that menus generate so much pleasure for an increasingly large number of people around the world, nobody has written a book that give menus the credit they deserve. With On The Menu, I intend to do just that.

THE MENU AS ART
ALLA TESTIERE, Venice, the daily fish menu.
LA BEAUGRAVIERE, Mondragon, France, truffles, truffles and truffles…The blackboard, everywhere.
CHAPTER ONE, Dublin, with the list of all its suppliers.
CUISINE WAT DAMNAK, Siam Reap, Cambodia, France in Asia.
INIS MEAIN, Ireland, nowhere is more local.
MONVINIC, Barcelona, where the menu is projected on to the wall.
LUK YU TEA HOUSE, Hong Kong, one of the longest running dim sum restaurants.
QUO VADIS, London, where a new menu design rejuvenated business.
SHIORI, London, where the menu, cooked by the husband and served by his wife, is presented inside an envelope.
TAILLEVENT, Paris, the classic, and most concise menu/wine list in the world.
ZUNI CAFE, San Francisco, perhaps the most appealing menu.


Pages to drool over.