Billy's a clone of William Shakespeare. So is Bill. Neither of them know that the other one exists. Today they're going to meet. 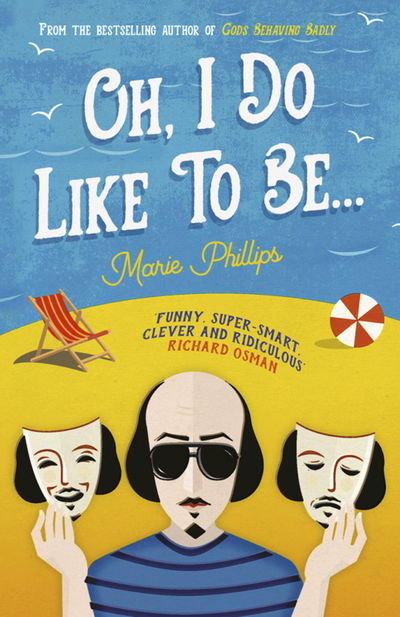 Humour | Fiction
You made Oh, I Do Like To Be... a reality. It's available in all good book stores now.
$8
55 pledges

Signed first edition hardback, eBook edition and your name in the back of the book.
$55  + shipping
16 pledges

A signed and dedicated first edition hardback, eBook edition and your name in the back of the book.
$60  + shipping
9 pledges

Wish You Were Here

A signed first edition hardback plus a handwritten thank you postcard from the seaside. Also, the eBook and your name in the back of the book.
$70  + shipping
3 pledges

Two signed first edition hardbacks, the eBook edition and your name in the back of the book.
$70  + shipping
7 pledges

To Swap Or Not To Swap

A pair of tickets to a one-off revival of Marie and Scott’s famous Book Swap. This ‘literary event with a difference’ ran for five years before Marie and Scott retired it but they will bring it back for one night only. It will be hosted by Scott Pack and Shelley Harris (author of Jubilee and Vigilante) with Marie and Sarah Franklin (author of Shelter), as the guests. Plus you get a signed first edition hardback, eBook edition and your name in the back of the book.
$85  + shipping
6 pledges

Wish You Were Here Souvenir

A signed first edition hardback, thank you postcard and a carefully chosen seaside souvenir that is definitely worth less than you are paying for it. Plus the eBook and your name in the back of the book.
$150  + shipping

Wish I Was There

A signed first edition hardback plus Marie will appear at your book group or writing group via Skype. [only 5 available]
$375  + shipping
1 pledge

A signed first edition hardback plus Marie will appear at your book group or writing group in person. [limited to 3 - UK/Netherlands, only unless by arrangement]
$1,125  + shipping
1 pledge

That Which We Call A Rose

Name a character in the book after yourself or a friend. Marie will choose the character, but possibilities include the sexy newsagent owner with the nice forearms, the grumpy B&B landlady with the multi-coloured hair, and the doctor's surgery receptionist with the impressive neck tattoo. [limited to 1]

Shakespeare clone and would-be playwright Billy has just arrived in an English seaside town with his sister Sally, who was cloned from a hair found on the back of a bus seat. All Billy wants is a cheap B&B, an ice cream, and a huge hit in the West End. Little does he know that their fellow clones Bill and Sal are also residents of this town. Things are about to get confusing. This modern update of The Comedy of Errors is what you get when Gods Behaving Badly author Marie Phillips decides to write an important, scholarly work about the life of William Shakespeare, reads the complete works, including the long poems nobody likes, and then decides to turn it into a short, silly farce that you can probably finish reading in an afternoon with two tea breaks.

A copy of the eBook
Buy now
View all 13 rewards