"I offered them swan terrine, but they were rather horrified..."

The wonderful oboist Nicholas Daniel alerts us to this report from BBC News Scotland from 2005, when the then-Master of the Queen's Music, Sir Peter Maxwell Davies, found himself being cautioned over the death of a swan near his Orkney home. The unfortunate bird had struck a power line. ("Max" himself died last year and is much missed for his mercurial and outspoken personality as well as his startling, fresh and sometimes overwhelming compositions.)

Our Odette, of course, is luckier than the Orkney bird and survives her window-crash - though Patrick does tell Mary, who annoys him by being vegetarian, "you could have cooked that kamikaze swan..."

With apologies and thanks to the BBC, here's the report: 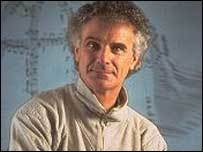 The Queen's composer has ruffled feathers after police found the body of a swan at his home.

Sir Peter Maxwell Davies, Master of the Queen's Music, was cautioned over the discovery of the remains of a protected species at his house in Orkney.

He said the bird died after hitting a power line. When police called at his home he offered them swan terrine.

Police would not comment but confirmed that a protected bird has been removed from a property in Sanday.

Sir Peter said he did not believe he had done anything wrong but, given his position with the Queen, he was prepared to spend time in the Tower of London.

Swans are protected under UK legislation.

However, in the islands a Norse right called Udal Law is still assumed to hold sway, possibly making swans the property of the people.

Sir Peter, who is a keen environmentalist, said: "These are Whooper swans coming from Iceland and there are hundreds of them. They occasionally go into the electric wires when they're taking off or landing on the lake.

"They fall down dead and I'm afraid some people eat them. You take them home and you hang them for four days and then you take out the breast meat and the good leg meat, you give the rest to the cat and dispose of the rest.

"I'd made a delicious terrine. While I was away in London, the police came to the island on other business - they keep their eyes on us wild people who live in the outer islands.

"They saw the swan hanging up for anybody to see. I came home and the swan had gone."

Sir Peter thought it had been taken by a local male otter.

He told the BBC: "I didn't realise the police had also taken some wings from previous swans which were hanging in the shed. I was going to give them to the school because they use them as Gabriel's wings in the nativity play.

"On Monday morning a police car came whizzing up the lane with a very charming young man and a very beautiful young lady. They didn't accuse me of killing the swan, they accused me of being in possession illegally of a corpse of a protected species.

"I had to give a statement. I offered them coffee and asked them if they would like to try some swan terrine but I think they were rather horrified. That was a mistake, wasn't it?

The composer said that, as on other occasions, he had reported the swan's death to the Royal Society for the Protection of Birds.

Eric Meek, RSPB area manager in Orkney said Sir Peter, widely known as Max, was "a highly intelligent man who cares about what is going on in the world".

He said: "Anybody who knows Max knows he cares about wildlife and wildlife conservation and would find impossible any suggestion he had killed a swan deliberately.

"He doesn't have to ring us to report dead swans. He just feels he is recording the incident officially. He is under no obligation to tell us, but I enjoy hearing from him because he's always good value."

Sir Peter said he did not think the courts would take Udal Law "terribly seriously" and declared that at his age he would consider prison a new experience.

He said: "I was brought up in the war and you don't waste food and here's wonderful food. I'm still waiting to hear instructions from Kirkwall as to whether in future I have to feed it all to the cats."

"I might yet be in Inverness Prison but I suspect, being Master of the Queen's Music, I might have to do porridge with a ball and chain in the Tower of London.

"Anyway, I was completely within the law by reporting this and making a delicious terrine."