Now Here We Are Thirty Years Later: A Memoir in Mountain Goats Songs

We've now hit 10% of our overall funding target and so, as promised, I'm sharing with you a Spotify playlist of 12 songs by artists who I'd place among John Darnielle's most significant early musical influences. There's one notable omission - Darnielle called Joni Mitchell's Blue 'the greatest singer-songwriter album of all time,' but it's no longer on Spotify - and doubtless a number of other artists who were just as important as the ones I've picked out here. But taken together, these songs give a good indication of what might have been in the singer's mind by the time he started making music. I'll take you through them, and their relation to Darnielle's work with the Mountain Goats, one by one.

1) 'Rose Darling' by Steely Dan. In 1988, back in California after his nine tumultuous months in Portland and living in employee housing at the Metropolitan State Hospital in Norwalk, Darnielle bought Katy Lied on cassette from a local record shop and followed it up with Aja/Gaucho - he then "spent much of the following year scrutinizing these albums as a jeweler might inspect a rare gem. I copied out lyrics onto large sheets of paper and taped them to the walls; I rewound the tape and played “Rose Darling” over and over, parsing phrases for nuance." Soon after this, he started making music as the Mountain Goats. It's easy to see how elements of the Dan's dark humour, as well as their penchant for cryptic storytelling within a tight formal framework, found their way into the young Darnielle's songwriting. But to get the full picture, we should also go further back.

2) 'Burn On - Live 1974' by Randy Newman. Newman was the first performer Darnielle saw live, aged 9, in 1975. In the absence of audio from that show, I've assumed the setlist might have been similar to this California concert in the preceding year. In one of the most distinctive early Mountain Goats recordings, 'Going to Cleveland,' which I wrote about in the 1993 chapter, the disaffected singer hears 'the Cuyahoga calling,' and wonders if he might be able to find a better life by leaving his own far behind. Newman's song comments ironically on the same river, which caught fire in 1969 as a result of environmental pollution: 'Cleveland, city of light, you're calling me ... the Cuyahoga River / Goes smokin' through my dreams.' It's not a promising prospect there either, but the idea might have left an early mark.

3) 'Barracuda' by Heart - the Wilson sisters fronted Darnielle's 'absolute number one band when I was 12,' in 1979, and he still remembered this song well enough to play a partial cover of it some forty years later. Meeting Ann Wilson backstage at a Bowie tribute show at Carnegie Hall in 2016, Darnielle was appropriately starstruck.

4) 'Hangin' Round' by Lou Reed. 'Listening to a lot of Lou Reed when I was a teenager is what encouraged me to just sing however felt good to me,' Darnielle told Pitchfork's Grayson Currin 2006. Transformer was the album which broke him out of a teenage prog phase - by age 15, in 1982, he was an obsessive fan, 'buying bootlegs, cut-outs, any Lou I could get my hands on.' Something about the loose, skittery, storytelling quality of this album track, which shifts in the chorus into a messy interpersonal narrative - 'you keep hangin' 'round me, / And I'm not so glad you found me. / You're still doing things that I gave up years ago' - feels to me like it might have made a strong impression.

5) 'Kiss Off' by the Violent Femmes. Spitting with jittery force, 'Kiss Off' is perhaps the first song on this mix to actually sound particularly like the classic Mountain Goats aesthetic. The Femmes' first album came out in 1983 when Darnielle was 16 and "changed my life along with half my friends’ lives. It would be hard to convey what it was like hearing that tune (or “Blister in the Sun,” or & especially “Add It Up”) at a cast party in high school. Just a poolside rec-room full of people all having the same wild electric feeling" - like being "present at the formation of a star that will give light to people who haven’t been born yet."

6) 'Mutiny in Heaven' by the Birthday Party: a work of singular, frothing intensity, blending scriptural imagery with powerful, theatrical menace. Here's how Darnielle described his seventeenth year - events seen from one perspective in The Sunset Tree (2005), and finding their way very differently into the landscape of Goths (2017) - to Vice journalist Cam Lindsay: "At this point in my life, I had a girlfriend who was super important to me, and we shut out pretty much the entire world," he says. "We spent the whole summer of '84 in near-total isolation. We were in her bedroom listening to the Sisters of Mercy, the Birthday Party, and even Leonard Cohen a little bit. I had a group of friends I hung out with, but I was experimenting with the idea of cutting myself off." And here, as briefly discussed in my 1996 chapter, is Nick Cave's 1984 Pasadena performance, with a familiar face in the front row: 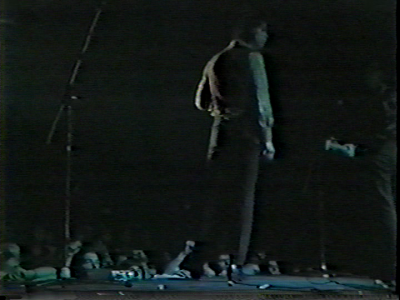 "To the left of Nick Cave’s left foot, at the lip of the stage, looking up in reverent, fevered wonder, right cheekbone partially obscured by a power supply: it’s John Darnielle, 16 years old, loving his life for at least the next 35 minutes and probably until at least 2 a.m’" - from JD's Tumblr

7) 'Deathwish' by Christian Death. Darnielle has a number of songs written as elegies for Rozz Williams, a friend he got to know in the late 80s. This appeared on Williams's band's first album, a significant touchstone in the 'California death rock' scene Goths - the album I'm currently most excited to write about for this project - would go on to explore. Darnielle presents Rozz as a lost fellow traveller: these recordings are among his rawest and most moving work, and I write about some of them here.

8) 'Five O'Clock' by the Stockholm Monsters, from Alma Mater - a record John has called ‘incontestably the greatest album of all time, bar none, all records coming in its wake being weak pretenders to an unassailable throne’ though he's also noted that it's hard to distinguish this from the deeply personal feeling of being young in a certain place and time (Claremont in the time just mentioned) to which it formed part of the soundtrack. He covered this song live in Manchester in 2007.

9) 'You Spin Me Round (Like A Record).' In a 2003 show at Berbati's Pan, Portland - the second time he'd ever returned to the city to play, and the first recorded - Darnielle describes dancing to this song at the City Nightclub, the venue he credits more than anything else for keeping him alive through that eventful year.

10) 'Red Light,' by Siouxsie and the Banshees. I don't know which song of theirs KROQ was playing in the 92-degree California heat Darnielle evokes in 'Stench of the Unburied,' but I'm including this one for its resonance with Darnielle's descriptions of his time in Portland, and his work's complex relationship with the images created by cameras. 'The aperture shuts / Too much exposure.'

11) 'Everybody Knows,' by Leonard Cohen. Darnielle saw Cohen perform in California in 1988, on his 'I'm Your Man' tour - he remembers being struck by the singer's dry banter, and afterwards disappointed to learn he repeated the same lines every night. Here's what Darnielle tweeted when news of Cohen's death broke in 2016: 'Leonard Cohen standing before the Lord of Song making good on his promise no doubt. Every songwriter I know in awe of him. His songs endure.' This one, in particular, is a perfect testament to the intricate things that can be done within a simple repetitive form - I'm inclined to see 'Rain in Soho' as its negative younger sibling.

12) 'Can't Take My Eyes Off You' by Frankie Valli. "For better or worse, [Valli and the Four Seasons' album Anthology] is more or less singlehandedly responsible for the Mountain Goats. I used to sit and listen to it really late at night in the dark in my apartment in Norwalk," Darnielle told Dusted magazine. Then he got a guitar and a tape-deck, and recorded some covers. After that, he kind of got a taste for it.

If you enjoyed this, please send the link to our call for backers to any friends who might be interested, and share it on your social media pages - we've still got a long way to go, but I know there are thousands of people out there who are as deeply affected by this music as I am and many of you are. If you can tell even one of them over the next week, and send them our way to back NOW HERE WE ARE THIRTY YEARS LATER, I'd appreciate that very much.

I don't think that selfie with Ann Wilson was from 2021, I think that's just when he tweeted about it. The Carnegie hall shows were in like 2013 or so.

Hi Colin, thanks for picking this up! You're absolutely right, I missed some of the context in the tweet - will edit accordingly.

A roll of 32 exposures

1 of 32 unique 6x8 photographs taken in Portland, OR in the course of the writer's research. Richard will document the trip on a disposable camera and a physical copy of one random photo will be posted to you directly with your book, with handwritten annotations by the writer.