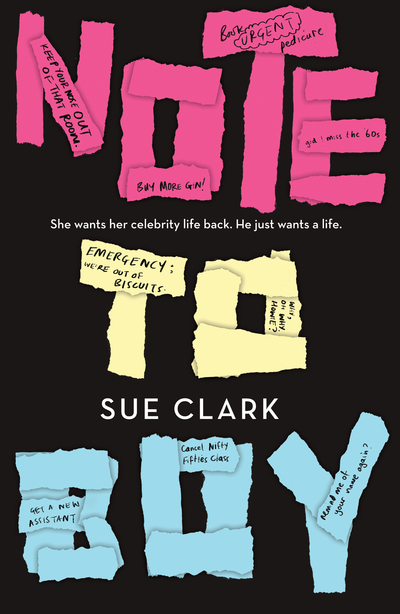 Fiction | Humour
You made Note To Boy a reality. It's available in all good book stores now.
$8
33 pledges

1st edition paperback and special e-book edition. Plus your name in the list of Super Patrons in the front of the book.
$90  + shipping
8 pledges

Join Sue Clark for a distillery tour and tipple. Plus a copy of the paperback with your name in the Super Patron list in the front of the book. In London at a date and venue to be confirmed.
$115  + shipping
14 pledges

5 copies of the 1st edition Super Patron paperback and the ebook edition and your name in the list of Super Patrons in the front of the book.
$150  + shipping
5 pledges

Join Sue Clark for a distillery tour and tipple for two. Plus two copies of the paperback with your names in the Super Patron list in the front of the book. In London at a date and venue to be confirmed.
$190  + shipping
2 pledges

Be In The Book

Your chance to name a character in the novel (subject to the author's approval) plus everything at the Super Patron Paperback level.

A personal dedication written by the author, thanking you for your patronage, in the front of the book, plus a ticket to the gin tasting. And Sue Clark’s eternal gratitude.

Outrageous former fashion celebrity Eloise Slaughter and introverted Kilburn council estate kid Bradley McCreedy are poles apart. She’s an extrovert, seventy-something, gin-soaked diva. He’s a seventeen-year old who’s learnt it’s safer to keep his eyes down and his mouth shut. She has a past she likes to boast about. He’s already given up on his future. Yet against the odds, as this comic novel describes, the two of them become a formidable team.

Bradley and Eloise’s relationship is volatile, not helped by her devotion to Bombay Sapphire gin and an increasing tendency to confuse the past with the present. While Eloise struggles with memories of long-ago betrayals and humiliations dating back to her days as a 1960s ‘shock frock’ fashion designer, Bradley grows in confidence and cunning. A locked room in Eloise’s chaotic London flat adds to the mystery.

Note to Boy is an entertaining romp that touches on universal truths: don’t write people off, just because they’re unimpressive or annoying; don’t let your past screw up your present; and value friendships, no matter where you find them. Oh, and it’s funny too.