No One Talks About This Stuff

15 writers on their experience of infertility, childlessness, baby loss and almost motherhood

The book in The Times and the i paper! Plus, Sybil's Pets as Therapy debut

Hello, and a huge welcome if you've support the book recently, it's absolutely wonderful to have you on board and I am so excited to read your name in the list of supporters when the book is published!

If you're wondering what the hell I'm doing in your inbox, this is an occasional series of updates that I send out to keep supporters up to speed with what's happening with the book – think of it like being the connection of a racehorse, only with a totally guaranteed win at the end (your copy of the book, plus rewards) instead of your horse possibly turning out to have three legs and its head screwed on backwards. 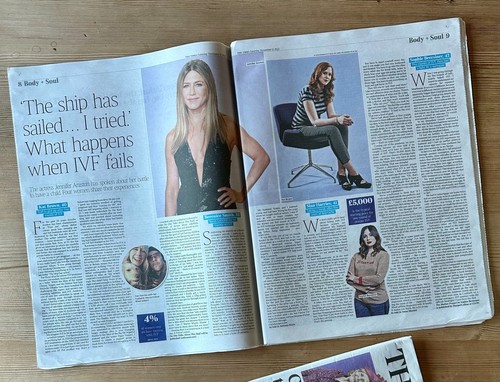 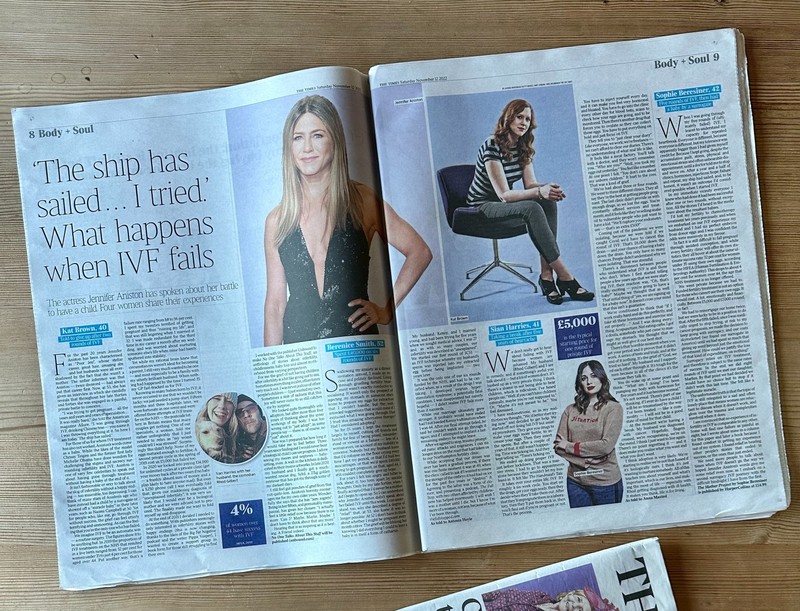 Some LOVELY early press for the book this week, linked to the actress Jennifer Aniston, whose extraordinarily generous interview with Allure magazine in the US featured her talking about what it was like having the Western press belittling her as a "career woman" or "poor Jen" while she was privately undergoing fertility treatment throughout her 30s and 40s. She hadn't revealed this before and it was really bloody good of her to share this.

I wrote a piece for The Times's Saturday Weekend supplement about going through fertility treatment without "getting" a child at the end, and why Aniston speaking about it matters – that's her "that ship has sailed" line in the headline here – and why I wanted to make No One Talks About This Stuff as a result. There are so few, if any, big names who talk about how difficult it is. It's been revolutionary enough to have former First Lady Michelle Obama writing about IVF in her autobiography, Becoming, and the very funny model and cooking entrepreneur, Chrissy Teigen, talking about IVF and baby loss on her social media accounts.

But infertility and IVF are hard enough to talk about without the massive downer that comes with it not working. Our culture has moved on from the lie of constant, pristine perfection being shown at all times, but if something bad happens, there needs to be a LEARNING we can take from it, or something to OVERCOME and make us shinier. Kate Bowler's Everything Happens podcast is fantastic on this, and I hugely recommend it, especially if you are going through grief and are generally quite cross about it.

The comments on the Times piece have been incredibly supportive and kind (which is, frankly, rare for anything online) and the print version featured five other women sharing their stories of failed IVF, including the comedian Sian Harries and the beauty editor Sophie Beresiner, who documented her journey to motherhood via surrogacy for The Times last year. 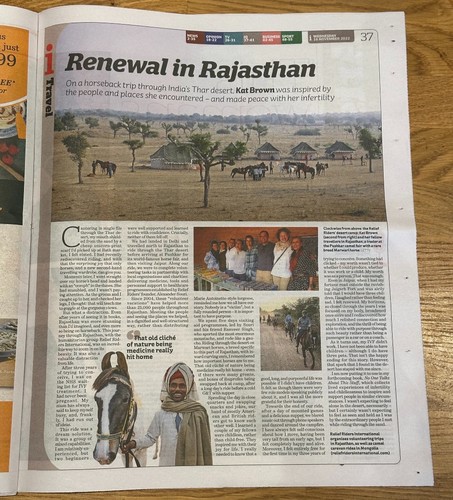 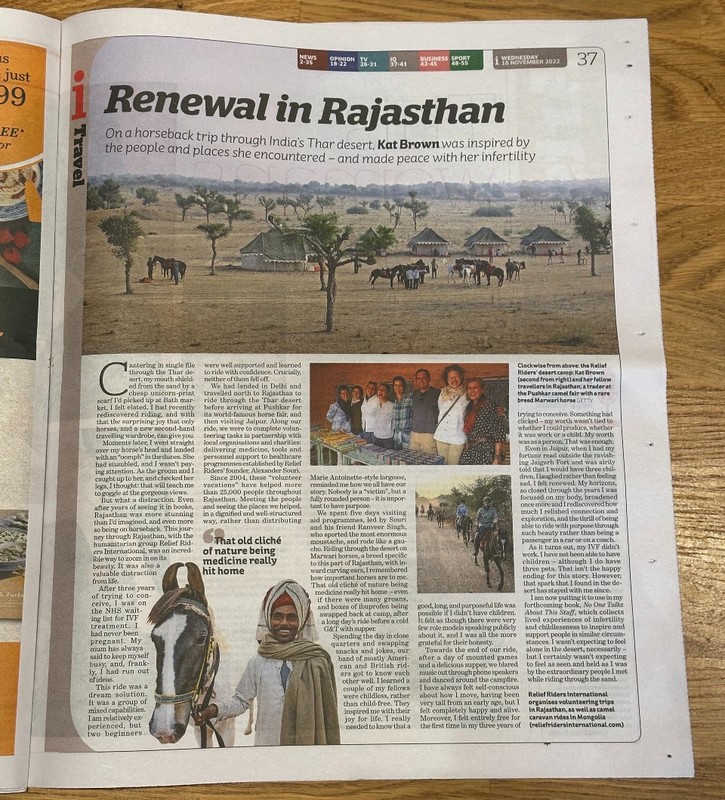 I also wrote a travel piece for the i paper about a truly incredible trip I went on in Rajasthan in 2018 with Relief Riders International, who combine snazzy holidays with genuinely useful humanitarian projects embedded in local villages and towns. I'd covered this trip before in The Telegraph and High Life, but this was a less straightforward travel piece as the i likes the "And what did you learn!!" angle.

But how does travel relate to a book about infertility! (someone who has never carried something with them everywhere they went might ask...) Well, everything relates to it when you're going through something, doesn't it, it fills every moment. Before I flew out to Delhi, I recorded a podcast episode with the Big Fat Negative girls, whose excellent book on IVF came out earlier this year, and while I was in the desert it came out and I listened to it in my luxury tent thanks to the sim card I'd bought at Delhi airport. I couldn't believe who this person was I was listening too. She was so self-assured and confident about the whole fertility thing, unlike the quivering real-life version of me who was freaking out quite a bit.

Being with the horses helped more than I can say, even when I fell off splat – thankfully, desert sand is wonderfully soft! Since I took up riding again in 2012, inspired very much by seeing Lee Pearson and his wonderful horse Gentleman riding at the London Paralympics, being with horses has been a real boost mentally, as it is for so many of the people who enjoy riding. This holiday gave me the time and space to explore what fertility meant, and with people who had had their own skirmishes with it – and were living great and contented lives regardless of the outcome. And God knows, I wanted to hear that life was going to be okay, and I had no idea where to turn to find these stories. Making No One Talks About This Stuff is my way of adding to the infertility book shelf, and getting those stories out there, and hopefully inspiring other people to do the same if they feel so inclined.

Thank you for the lovely messages and advice on brain fog. In the end, very boringly, it has been time that helped – that and my therapist doing a depression check and getting my antidepressants raised as a result. Having lived with depression etc for nearly 30 years, it always takes me by surprise when events or things make me depressed, rather than it just being the default setting for my brain. Fascinating things, aren't they, brains – I hope I'll know mine better by the time I stop having cause to use it, but in the meantime I'm very glad for the observations of other people.

The hideous cloud that has been over me for the past few weeks has largely lifted, in part due to that, and to the antibiotics starting to clear out of my system. It feels like years! This morning, I went to Guy's for a blood test to see if I'm still riddled with bone plague and nearly keeled over on learning it's only 10 weeks since I had my last operation. Time flies when your brain is made of candy floss, but on the bright side, I am walking without any supports and only a medium limp and getting closer to handing in the book!

Yes, on that note... I have been absolutely exhausting the internet's sources of copyright-free poetry in search of something that feels right to tie the book together (and crucially won't cost me £££ unlike everything that is still in copyright). I have a few contenders but nothing that's quite "it" yet. If you have a poem or a phrase that has really struck a chord with you around grief, loss, resilience, and the like, I would love to know about it. And I'd love to hear from you about anything book-related, in fact! Leave a comment, email me at noonetalksaboutthisstuff@gmail.com, or Instagram me @noonetalksaboutthisstuff. 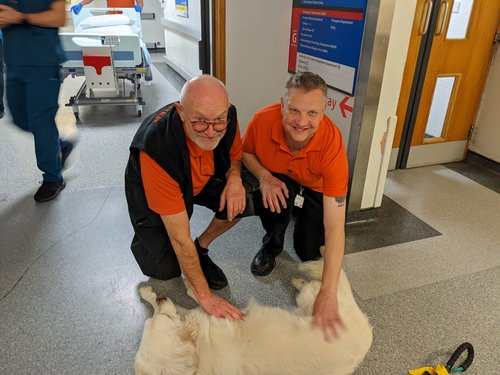 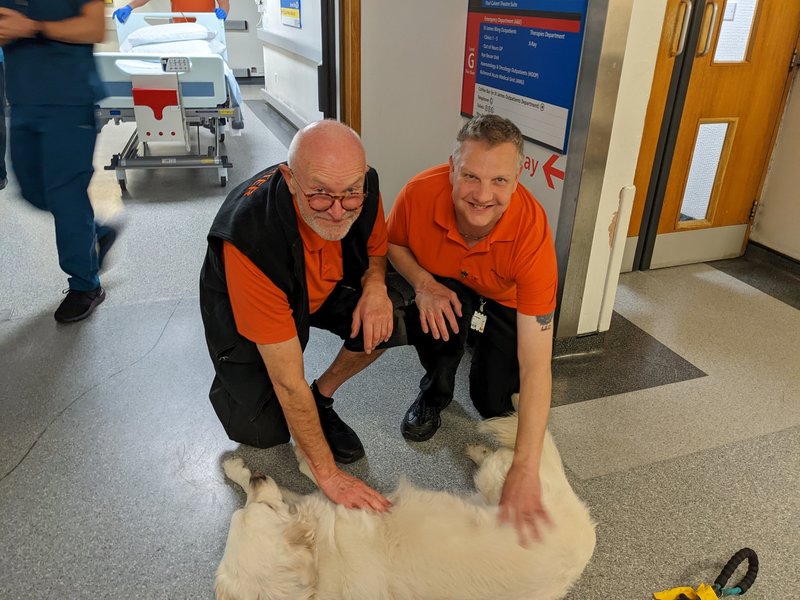 Lots of you have pledged for book rewards involving my dog Sybil (and rightly so!) so I'm thrilled to tell you that the precious bebe recently did her first shift at St George's hospital in south London as a Pets as Therapy dog. She was BRILLIANT. Large pieces of medical machinery were being wheeled around her while she lay on the floor accepting tummy cuddles from all the staff. We're going back again this week where she will be providing more of her morale boosting services as what basically amounts to an IKEA sheepskin rug.

Hope you're ticking over alright, and have something good to watch on the box at the moment.

Lovely update Kat. So looking forward to reading No One . .

Not sure when "copyright free" comes in or whether permission to print from a poet's family will suffice instead? In the midst of getting through childless grief I found this poem and it stuck in my mind as a way of getting through (anything of course). May not resonate with you. Clare xx

If you will tell me why the fen
appears impassable, I then
will tell you why I think that I
can get across it if I try

Came across it in Poem for the Day collection and still love it.

Oh Clare how gorgeous! And googling it I see it's been one of TfL's trusty Poems on the Underground (whoever selects them is a genius, I love every one I see).

Yes, the copyright will usually belong to the author (and publisher will administrate it) until 70 years after their death unless there are extenuating circumstances. I have already been warned off song lyrics which can cost an absolute bomb!

Some really beautiful poems I've been sent include Emily Dickinson's 'I measure every grief I meet' which is lovely, albeit swimming in random caps. My phone is also a mass of screengrabs of verses and poems I've seen as I go!

A first-edition copy of the book, with your name in the back among the list of supporters.

A signed, first-edition copy of the book, with your name in the back among the list of supporters.