No Lipstick in Lebanon

High-rise hell: an Ethiopian maid’s frantic scramble for life in the Middle East

From Lense to Lines - Part 2 Beirut

Here are a handful of my Beirut images, garnered in 2012 from a few days of perilous wandering in the name of ‘book research’. Author’s notes follow the relevant extracts from 'No Lipstick in Lebanon'. 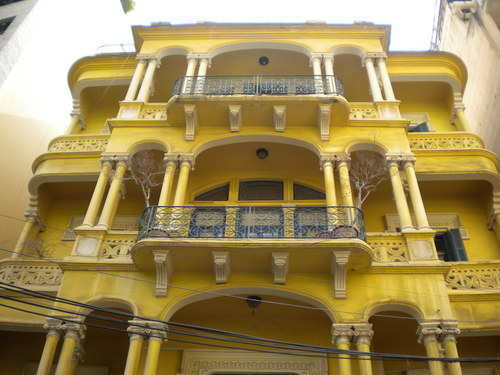 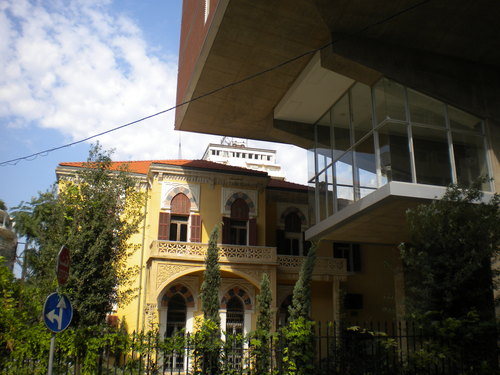 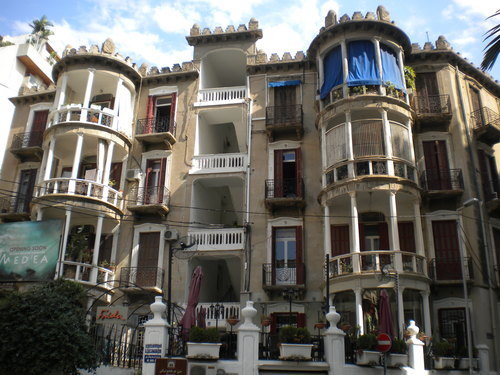 “Beirut’s backdrop is immediately unremitting. Endless rows of dirty colourless apartment blocks merge into a many-eyed monster surging upwards from the ground to prod a fluffy blue sky struggling to be seen. Occasional decrepit delicate houses with semi-circular balconies, wooden shutters and jaunty arches punctuate the wall of concrete: these frail old French colonial homes are surrounded by the monster and their chances of survival seem slim.”

When my wife, Fasika, first arrived in Beirut to work as a maid (in 2004), she was whizzed through the city’s suburbs to her new home. My wife, or ‘Meron’, as she is renamed in the book, would have glimpsed these colonial beauties cowering beneath a tsunami of concrete. Describing this in her story, I wanted to also capture a sense of the menace lurking within this architectural ‘monster’ specifically for Meron although she was oblivious to this at the time and believed the city to be her new paradise. Unfortunately, the city was ugly on both the outside and the inside.

The collapse of Beirut’s former mantle – ‘Paris of the Middle East’ – through civil war and unplanned urban redevelopment remains an issue in the city today. In the face of so many other challenges (not least the wave of Syrian refugees fleeing the Syrian war and ISIS), the Lebanese authorities turn a blind eye to the commercial developers, thus encouraging the ‘monster’ on its unchecked rampage. 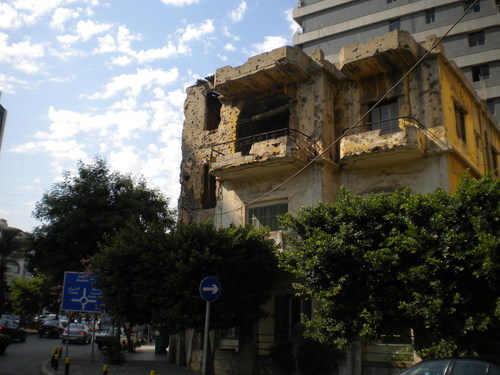 “’These marks you see on side of building... they from gunfire and mortar shells... we live on Green Line during Lebanese Civil War... they catch us between two sides... but this mean nothing to you, no?’

She’s right. My tourist notes on Lebanon are light on matters of heavy bombardment.”

When my wife arrived at what was to become her Beirut 'prison', she noticed what appeared to be filthy blots on the side of the building. These were actually holes which emanated from one of the worst civil wars of the last century (Lebanese Civil War 1975-1990). The so-called Green Line was a demarcation zone separating the two sides: the Muslims in West Beirut and Christians in East Beirut. In the photo above, you can see one of many shell-peppered buildings still inhabited in Beirut today.

In the story, Meron clutches an internet print-out detailing Lebanon’s tourist sites, naturally lacking any reference to the Civil War. But one should remember also that Meron is from Ethiopia, a nation which, apart from Mussolini’s brief incursion (1936-1941) and Geldof's famine (1984), has been relatively isolated from the rest of the world until very recently. Meron is happily jumping into Beirut without a shred of knowledge about this troubled city, and she will have her own war to fight here too. 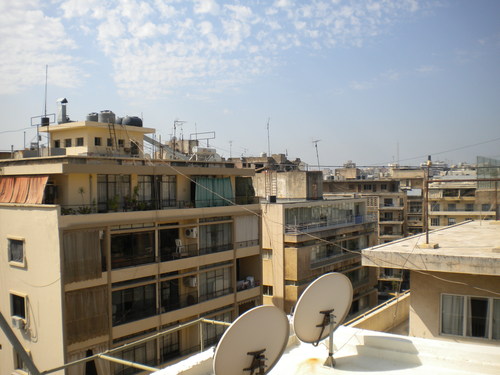 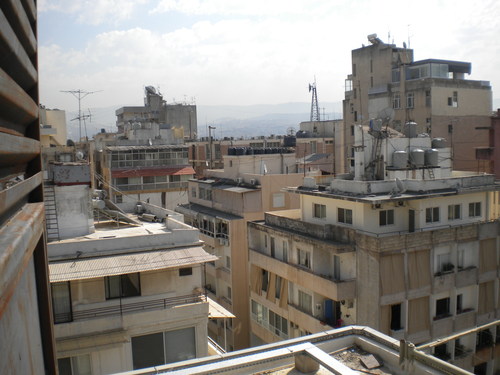 “I exchanged Addis for Beirut, but I cannot say I am really here. It is a peculiar world floating high above a land I expect never to enter, explore or enjoy.”

Not the most inspiring of views but this was my wife’s actual experience of Beirut for a prolonged period of time. High-rise incarceration, even within a luxury penthouse, is a feature of modern slavery in Lebanon.

“Not many ways to escape this prison but jumping is as obvious and convenient as the emergency exit on the Addis – Beirut flight. Would anyone notice a splattered Ethiopian ant on the Beirut asphalt?” 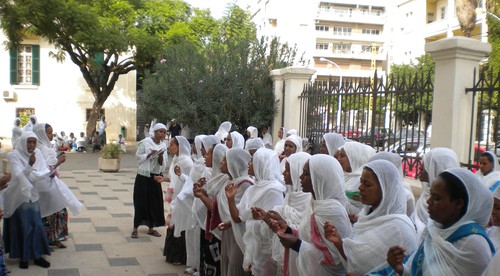 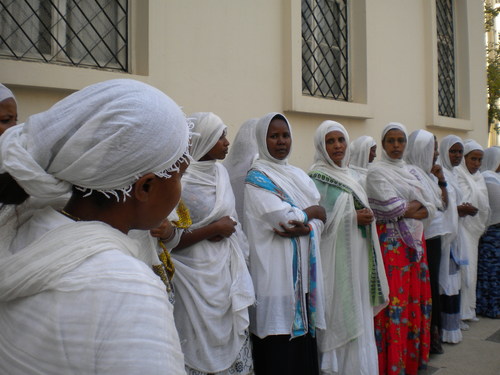 “On Sundays in Beirut, Habesha (Ethiopian) maids attend an Orthodox Christian service outside a small convent church close to Badaro Street. Afterwards, they eat injera and drink coffee. It should be a day for spiritual revitalisation, a day to rest and recover in good company.”

It should be, but isn’t for the vast majority. Those in the photo are the lucky few. These Ethiopian maids have sponsor families who respect their employees. But having at least one day off each week is a very basic right that all migrant workers should expect. Unfortunately, thousands of Ethiopian, Nepalese, Bangladeshi, Sir Lankan and Filipino workers (amongst others) in Lebanon and the Middle East are not allowed to pause for a single day to draw breath.

My wife was amongst the unlucky majority. How did she endure that constant grind, working from 5am to 11pm every day? It’s hardly surprising that some maids lose their minds, and some their lives. 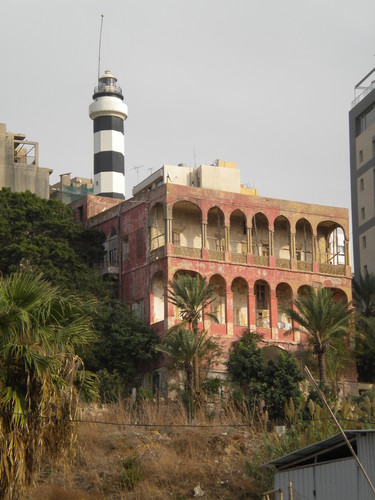 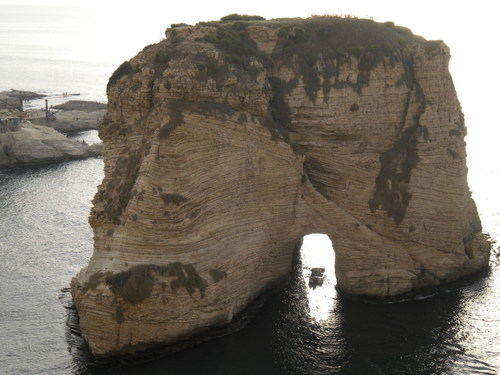 “Madame points out Beirut’s lighthouse and the Raouche Rock, but I can’t see either of them. Instead, the view is dominated by concrete roofs, water cisterns, satellite dishes and smog.”

Most residents and tourists in Beirut will enjoy these two views from Beirut’s Corniche (promenade) together with its famous night life and restaurants. In the quote above, Madame is telling Meron that the sights are there, but her view is blocked by numerous obstacles: Meron will never glimpse the glories of Beirut. This invisible view - which Madame can clearly see - offers up another allegory on Meron's plight. (NB. Raouche Rock is not Durdle Door in Dorset). 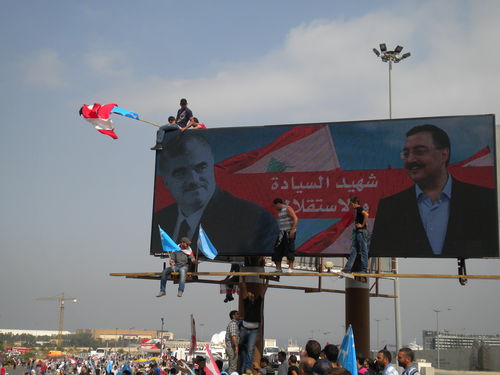 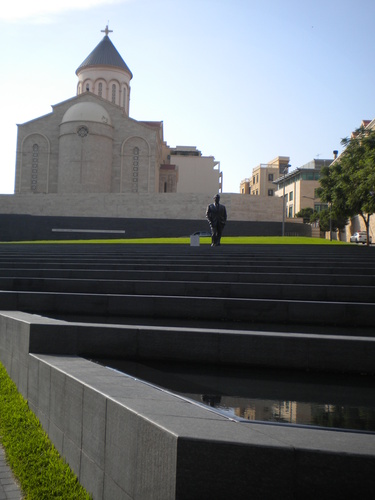 “Madame stares back at me, her wilting body a dying tree, her face whiter than the Moon, her eyes filled with the fright of a hunted creature cowering in the shadows. She carries the aura of death. How could she know? It was only a minute ago that I dropped Madame’s granddaughter on her head.

My wife’s time in Beirut coincided with the assassination of Rafik Hariri, the revered ex-Prime Minister of Lebanon (died 14th February 2005) and probably the most recognisable face of Lebanon. A massive roadside bomb killed him and twenty-one others in an attack that sent shock waves through the country’s ruling Sunni Muslims, helping to trigger the Cedar Revolution against the occupying Syrian forces. Suspected perpetrators of the assassination included Hezbollah, Syria and Israel.

Hariri’s right-hand man, Wissam Al-Hassan (Chief of Intelligence) was killed in a similar way on the day that I began my stroll through Beirut (19.10.12): only three hours earlier, I was in the same neighbourhood as the fatal bomb. When I returned the next day, an entire street had been gutted. Two days later, I witnessed the thousands of Hariri supporters at Al-Hassan’s funeral – the first photo (above) shows his projected image next to Hariri. The second photo is the Hariri Statue in downtown Beirut.

In the book, Meron has to deal with the raw emotion of her sponsor family (hardcore Hariri supporters), while contemplating a possible accident caused by her own lack of concentration, the type of accident that would precipitate violent acts towards her. However, the tension of the situation is tempered with unexpected humour: it’s not quite Fawlty Towers, but in writing this type of fraught chapter, comedy moments seem to ease their way into the dialogue without warning and in the direst of situations. Inducing the reader to giggle out loud at this inappropriate point is one of the reasons I write. 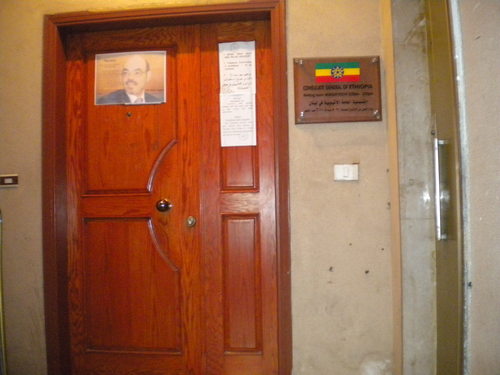 “Yanking me along by my hair, Madame hauls me inside the building and up a single flight of stairs. Stuck to a reddish-brown door is a poster of our Prime Minister Meles Zenawi, smiling benignly. This encourages me. Friendly Ethiopia, my country, is behind this door...”

It was strange and salutary to enter the same Embassy door my wife had been dragged through six years earlier. I was able to wander through it without the same duress. In the name of ‘book research’, I suddenly became a confused tourist: “Hi, sorry but I’m English... could you tell me where the National Museum is?”

In contrast to the surly welcome received by my wife, the polite Embassy staff managed to restrain their irritation at me: after all, I am a ‘rich’ white man, not a desperate downtrodden citizen of their country. The ten minutes behind this door provided me with enough detail to complete probably the book’s strongest chapter. And the sooner we get sufficient pledges for publication, the sooner you'll be able to read it!

In next week’s Shed... I have no idea! Requests more than welcome.