During the long gestation period of Gibbous House, I used to publish a short story or two in what was then known as the shed, to keep people interested. Whether it did or not, I'm not entirely sure. In any event, for those who continue to actually read the updates, here is an old short story that once won a prize. It's not about Moffat, or the 19th Century United States, but you might enjoy it anyway. 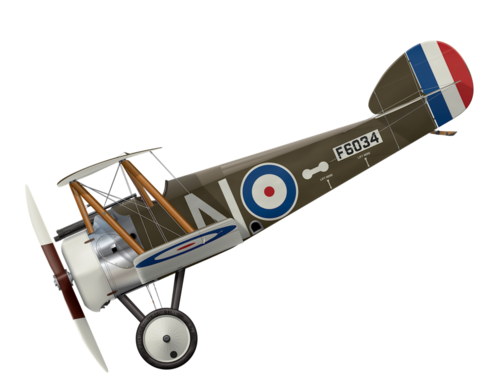 The smell of aviation fuel and the throaty sound of the Le Rhône engine on start-up was
the best part of any sortie, Fawcett believed. 'The promise of soaring like Daedalus', Augustus Paget had said over breakfast, last week. He was a bit green. At times the mess was like being up at King's, at others like being in the saloon bar of a pub. He wasn't sure whether some of the Canucks would have known who Daedalus was.They could fly though. No-one disputed that.

Ten minutes until take off. Back in three-quarters of an hour with luck, and a day with
Conrad's latest. Not his best, The Shadow Line. Some scribbler in the Times said it was a metaphor for the war. What kind of idiot thought any metaphor would do this lot justice? Fawcett looked at his recent gift from the War Department. Five minutes to the hour. It didn't keep as good time as his half-hunter and it still felt strange on his wrist. It was useful enough, one supposed.

Calais wasn't so bad, flying out of Vert Galad had been pretty grim. No one admitted it but this detachment, however brief, was a welcome respite from the Somme. Fawcett looked over at his wingman, Pritt. An odd fish and no mistake. There had been some problem with a cheque a few weeks ago. There were worse pilots for a pair on a Defensive Air Patrol, however.

The Adj had briefed some intelligence about Gothas heading for London. The weather was good and it might even be an accurate report. Whisper it low, he would be happy with a debrief which consisted of 'Nothing to Report'. He doubted that Pritt felt the same. 2 confirmed 'kills' already, well on his way to becoming an ace, Pritt was keen to compare himself with the others in the mess. Fawcett hadn't a single confirmed kill in 18 months of flying. It all depended how you liked to keep score. Better to measure your own longevity than count the curtailments of others'.

He waved to Pritt and signalled 'chocks away' to the mechanic attending to his own Pup. His kite was playful in his handling and like many before him he felt the sobriquet suited it better than its official designation. Still, a DAP was more or less a scouting mission, really.

The 'plane rolled over the grass. Fawcett waggled the stick. The flaps had seemed a little
sticky on preflight checks. His Pup swerved over the grass and he heard the throttle roar on Pritt's aircraft behind him. He lifted his arm in the cavalry signal for a charge and opened his own throttle. The pit of his stomach lurched as the wheels left the turf. The joystick came towards him easily and the bonds of earth were broken. 'What bliss it is this dawn,' he thought as he often had, since the move to Calais. There were more clouds than the meteorological report had indicated. He wondered why they didn't just look out of the window. Their predictions were so often wrong.

He banked the Pup until the compass needle read 92°. Allowing for pitch deviation this meant he would roll out on 60°, over towards the sea. The pair would fly a box-patrol and return to base. Pritt would follow Fawcett's lead. They might make a 55 minute sortie out of the patrol. Intelligence said that the Gotha bombers should arrive in their loiter area at 08.00. That seemed unlikely. The weather was reportedly worse over the German airfield at Sint-Denijs-Westrem in East Flanders. He had told Pritt that it was unlikely they would see any of the huge German bombers today. The older man grimaced and gave a short nod before looking out of the briefing room window.

Now the sky was an innocent blue, even at the distant horizon there was nothing, not even a mare's tail. They were over Belgium already. Out of the corner of his eye he saw Pritt waggling his wings. Pritt pointed out to starboard. Fawcett could see nothing, but gave his wingman a wave of acknowledgement and banked slowly to the right. There! In his two o'clock, higher by several hundred feet - an Albatros. A reconnaissance plane? A precursor to a bombing raid, perhaps. They had agreed at the pre-flight briefing that Pritt would try to tempt any singletons by trying to pass in front of their guns. The Sopwith Pup's manoeuvrability made this a slightly less than suicidal tactic, but not by much. Pritt's grin had shown the gap in his teeth.

'You get on his tail double quick, in that case, Sir.' Then, of all things, he had winked at him.

Fawcett had done his time as the bait in the trap, it wasn't a question of cowardice. Just seniority.

Pritt opened up the throttle and headed off on a course that would cross the German aircraft's if he remained straight and level. Fawcett throttled back and waited for the German to cross in front of his own Vickers. He wondered when 66 Squadron would receive the new Camel. Twin Vickers; two guns must be better than one. The Albatros was closing on Pritt's aircraft. Surely he would fire? The German pulled up sharply, going into an Immelmann. He hadn't fired. The repositioning manoeuvre had been invented by a German, but why was this Joker doing one before firing? Fawcett turned to look over his right shoulder.

Five. Five more Albatros. Perhaps from Douai. Everyone knew who flew from there. Fight or flee? Go high? At 16,000 feet, he'd have better manoevrability. That was still too many German fighters to take on. Pritt would understand. Fawcett descended as low as he dared. Hedge-hopping west. The Germans didn't follow. Pritt would be okay. His sort always were. Perhaps he'd be forced down by Von Richthofen himself. That would be a tale for the mess, when he got back. If he got back.

He pulled back on the stick, kicked down and forced the rudder left. You couldn't do what he'd just done and go back with not a hole in the canvas. He would cover the 10 miles fairly quickly. Well, he'd see how it was when he got there.

Pritt's aeroplane was still burning. There were only two Albatros circling. Looking for signs of life. They wouldn't shoot, it wasn't done. Just checking for the post-sortie debrief. Fawcett knew he was starting to fire too early. Even so the nearest German kite's tailplane was in rags after the first burst. It hadn't far to fall, 150 feet or so. The propellor buckled as the nose ploughed into the ground. The other German was rising steeply, maybe trying the Immelmann again, this time to get behind Fawcett. He tried to follow the manouevre, and loosed off several bursts from the Vickers. Maybe a nick on the port upper wing, nothing effective. The German finished off the loop. Fawcett tried to roll out behind him. The Pup went into a spin. The other pilot would be smiling now, he knew.

He felt something underneath, perhaps the undercarriage had taken a few rounds. The Albatros's twin guns weren't particularly accurate, but two guns really were better than one. Fawcett could make a forced landing and surrender. Fair play and all that. The 'plane was handling very heavy, most likely he had lost a wheel. The German had to know he was landing. Fritz didn't fire again. The Pup fell the last 10 feet out of the sky. One wheel had gone completely, because the tip of the starboard wing was touching the grass. The German Pilot taxied around until his kite was in front of Fawcett's.

The enemy was just setting foot on terra firma when Fawcett emptied the Vickers's belts into him. He saw the German's eyes widen behind the goggles. What was it ? Veitstanz, St Vitus' Dance auf Deutsch. The jerking stopped and the Hun fell into the longish grass. Captain Fawcett climbed out of the cockpit. It was a long walk back to the British lines. He whistled the tune they all sang so very badly in the mess. He gave a salute to Fritz's body and Pritt's aircraft. The smoke was rising vertically, undisturbed by even the slightest breeze.

It was going to be a very nice day for a stroll.